Hamilton: We’re bouncing a bit still, not on the straights 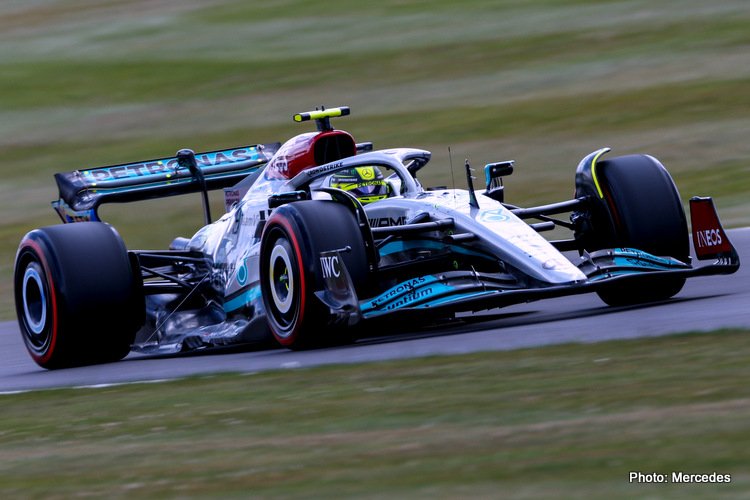 Mercedes reported an “encouraging” start to their 2022 British Grand Prix weekend with their local heroes – Lewis Hamilton and George Russell – happy with progress ahead of qualifying for their home race.

The pair appeared content with the hitherto awkward W13 which was working well enough the second-fastest time on the day, with Hamilton only bettered by 0.163s by Carlos Sainz’s best effort in the Ferrari.

The team introduced a number of updates for Silverstone including changes to the floor edge, rear wing tip and front suspension.

Apart from P2 when the day ended, the team reported that Lewis set a strong time at the end of FP2 on the Soft tyre, good enough for P2, with George finishing P8 having started on the Hard tyre as the drivers ran a split programme.

Hamilton summed up his day in the team report: “It has been a good day, we managed 10 laps in FP1 which was better than most, so I was happy with that. We’re bouncing a bit still, not on the straights but through the corners so we’ve still got work to do.

“It does feel like a small step forward but we’ve got to keep working. With this car you can’t drive the tracks the same as you used to, with how stiff it is and the ride characteristics, but it’s still fun through Maggotts, Becketts and also Stowe – it’s mega; my favourite corners.

“It was difficult to feel the upgrades because you’re coming from such a different track; slow-speed corners in Montreal to the medium and high-speed corners here. The track is smoother than we’ve had recently which is much better but in general, this track is just the best, it’s still hair-raising to drive.

“Our long-run pace isn’t as good as some of the other guys but it isn’t far off. The crowd give me hope, it’s so good to see them here and I appreciate the support so much,” enthused Hamilton.

Russell: Over the course of a race, we’re in a pretty good window 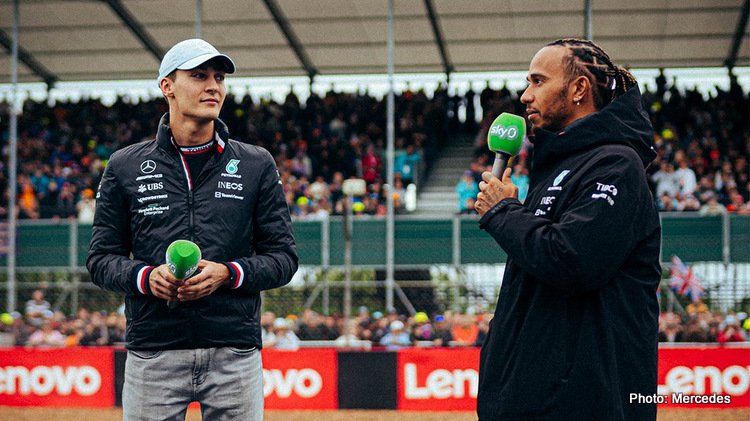 In the sister Mercedes, George Russell was eight on the timesheets at the day’s end, three-quarters down on his teammate, he reported: “I struggled on the low fuel compared to Lewis, he put in a very strong lap. The high fuel was definitely more promising compared to the McLaren which was also on the Hard.

“By the time our tyres warmed up, we showed good pace to the Ferraris and were improving lap after lap. Some positive signs there but definitely room to improve.

“We need to understand why our race pace is so much stronger than our single-lap pace, the McLaren is very strong on a single lap but we just can’t get the tyres working over a single lap.

“Over the course of a race, we’re in a pretty good window but it’s always a balance, you can’t just put your eggs in one basket for Sunday.

“It’s a very different circuit to Montreal and Baku, we knew the car was going to be a challenge through the high-speed corners and that proved true through Copse, Maggotts and Becketts, the car was bouncing around, so we need to try and understand that.

“But we aren’t bouncing down the straights which is positive,” concluded Russell, echoing Hamilton’s sentiments on the W13 latest behaviour.

Shovlin: a reasonably encouraging start to the weekend 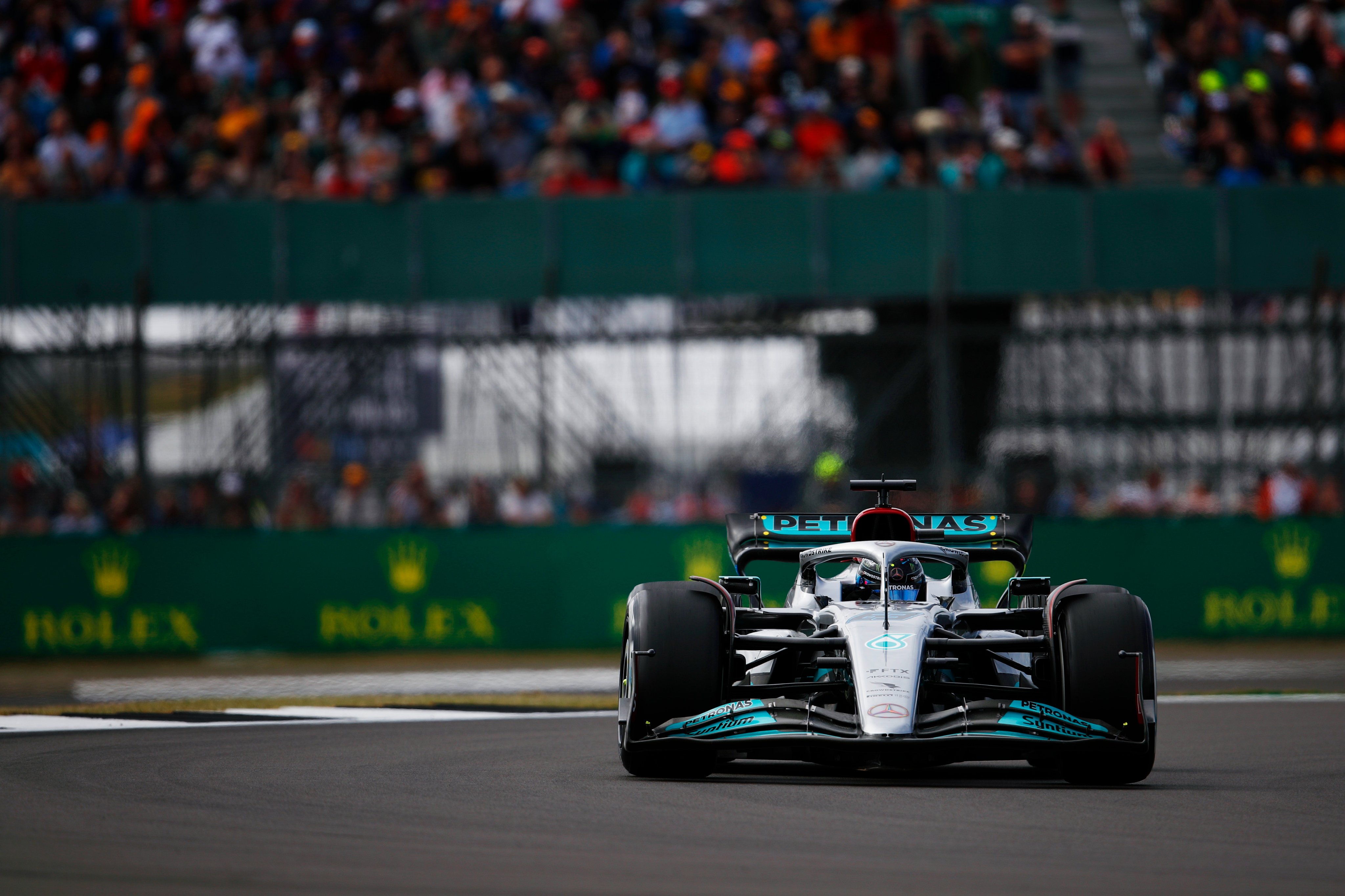 Mercedes trackside boss Andrew Shovlin gave the team’s perspective: “It’s great to be back at Silverstone and fantastic to see the grandstands so packed.

“This was our best Friday for a few races. We’ve still got a lot to improve but the car is working much better at this track than the last few street circuits.

“It’s really hard to evaluate whether the updates are doing exactly what we’d expect, especially in the windy conditions, but we’ve not seen anything worrying so we’ll continue with this specification for the rest of the weekend.

“George had a trickier session than Lewis but we had the Hard tyre on his car for the start of the second session and the double compound step made it difficult for him to get the most out of the Soft. Saying that, his long-run pace was encouraging.

“Lewis put in a strong lap on the Soft compound but we expect the fast teams to have plenty to come tomorrow so we need to work hard to iron out a few of the balance and bouncing issues. Lots of work to do overnight but a reasonably encouraging start to the weekend,” said Shovlin.

While Friday at Silverstone may be somewhat deceptive in terms of real pecking order, Hamiton’s form is on the upo since his podium in Canada last time out, while home advantage at Silverstone is something he understands well.

Hamilton has won his home Grand Prix no fewer than a remarkable eight times – including last year in controversial style – and certainly knows his way around the former airfield, if anyone can win Sunday’s F1 Battle of Britain just don’t count out Lewis if today was anything to go by.