Ricciardo: We’ll do everything we can to deliver for our fans 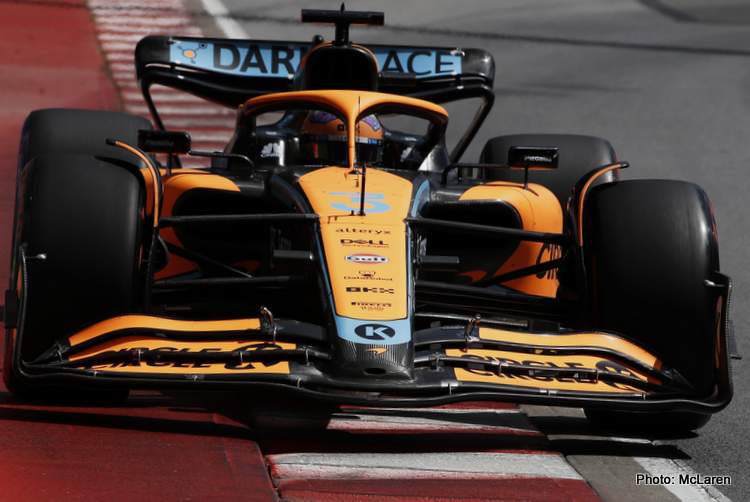 Daniel Ricciardo is excited about the 2022 Formula 1 British Grand Prix, McLaren’s home race, and vows to do everything to deliver a decent result for the team’s fans.

McLaren head to their home grand prix in Silverstone after a tough weekend on the other side of the pond at the Canadian Grand Prix where Daniel Ricciardo and Lando Norris finished 11th and 15th respectively.

The team struggled with their MCL36 all weekend, and team principal Andreas Seidl issued an apology to both his drivers for the awful car they had at their disposal in Montreal

Ricciardo, however, is looking forward to the next race at Silverstone, and said in the McLaren’s race preview: “The British Grand Prix… let’s go!

“It’s a home race for the team and that means we’ll definitely feel the support in the grandstands,” he added. “There was a sea of papaya last year, so I’m excited to head there again this year.

Ricciardo made his F1 debut in Silverstone

“It’s the race where I made my F1 debut, so it holds a special place in my heart anyway, but it’s also a great circuit to race on too, so I can’t wait to get out on track.

“Canada was a difficult one,” Ricciardo reflected, “but we have to learn from it and keep moving forward. Silverstone offers some good overtaking opportunities, so it will be fun to see what we can do in these new regulation cars.

“I’m excited to get on track and hopefully get back up the pointy end for our home crowd – we have awesome fans so we will do everything we can to deliver for them,” the Australian concluded.

Teammate Lando Norris added: “I’m so excited to be heading back to my home race at Silverstone. Seeing the British fans and all the papaya as we drive round the track is always so motivating and such a boost for the team – nothing beats a home crowd.

“I’m looking forward to seeing everyone in the fan zone and soaking up the atmosphere,” the Briton admitted.

“We’ve been working hard on our performance since the last race in Canada and working as a team to understand what we need to do better,” Norris revealed.

“We’ve got a good understanding of that now, and although we know there are no overnight fixes, we’ll be doing everything we can to give the home fans something to cheer about,” the 22-year-old concluded.

Some of the track features will be a challenge

McLaren team boss Andreas Seidl said in the team’s preview: “There is nothing better than a home race and the whole team is looking forward to seeing the papaya fans among the sell-out crowd.

“Of course, as well as being a home race for the team, Silverstone also marks Lando’s home Grand Prix, which means we really feel the support from the grandstands. Plenty of our own team will also be at the race, seeing their hard work in action.

“It’s been good to spend some time away from track since Canada,” Seidl admitted. “Since then, we’ve reviewed the weekend, know where we need to improve, and we’re now putting our full focus on the weekend ahead of us.

“The track itself is a fast one,” the German went on. “Some of its iconic features such as Maggots & Becketts are a challenge for any driver so it will certainly be an exciting one for the fans.

“Logistically it’s a nicer one for the team as it’s a shorter journey to the circuit compared to usual – certainly a perk of a home race.

HYPED to be back racing at home. Silverstone awaits. 👊 #BritishGP 🇬🇧 pic.twitter.com/1QgdvNq4de