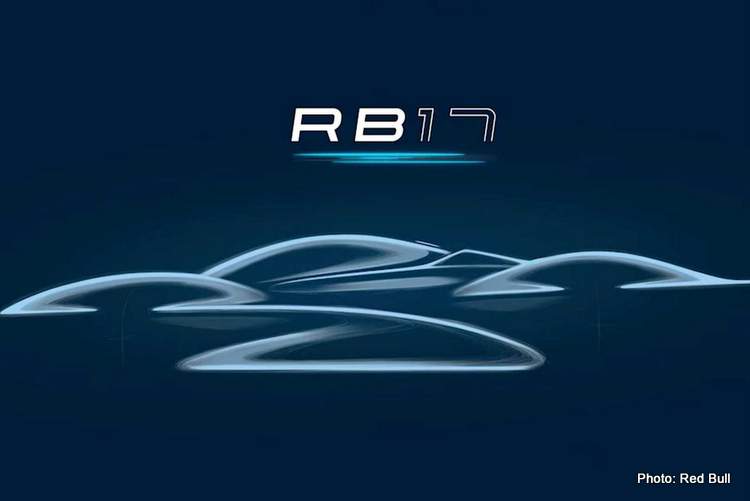 The RB17 will be the first ever road-going performance car produced by Red Bull Racing Group, and will boast a V8 hybrid engine producing over 1,100bhp.

Production will be limited to 50 units only and is planned to start in 2025. Pricing for the car – that will come in track-only specification for the purest execution of an F1-inspired hypercar –  will start at £5-Million.

“Created by Adrian Newey, Chief Technical Officer of Oracle Red Bull Racing and Red Bull Advanced Technologies, the RB17 is a two-seat hypercar optimized for the ultimate on-track driving experience. Just 50 RB17s will be made at the Red Bull Technology Campus in Milton Keynes, with production scheduled to commence in 2025.

“Powered by a V8 hybrid engine developing over 1,100bhp, the RB17 takes its inspiration – and name – from the cars that Red Bull Racing has campaigned in the world’s most demanding and technically advanced motorsport series. Designed around a carbon-composite tub, the RB17 features the most advanced ground effect package available in a series production car. Full technical details for the RB17 will be released in due course. Expressions of interest in the RB17 can be made from today at RB17@redbulladvancedtechnologies.com

“Pricing starts at £5M (plus applicable local taxes) with just 50 collectors set to become owners of the RB17. That ownership includes more than the car, bringing a close association with the Red Bull Racing team through access to simulators, vehicle program development and on-track training and experiences. The RB17 will be supported directly by the factory, with servicing and maintenance support tailored to each owner and their usage profile for the car.

“Since its foundation in 2005, Red Bull Racing has progressively expanded its operations and capabilities, now located on a 290-acre campus in Milton Keynes. Red Bull Advanced Technologies was created in 2014 and brings its exceptional engineering, design, technology, simulation, and production capabilities to a hugely diverse set of industries. The creation of the RB17 will both secure existing jobs and create over 100 new positions in Milton Keynes, in addition to the economic benefits across project partners and suppliers.”

Adrian Newey, Chief Technical Officer of Oracle Red Bull Racing and Red Bull Advanced Technologies commented: “The RB17 distills everything we know about creating championship-winning Formula One cars into a package that delivers extreme levels of performance in a two-seat track car. Driven by our passion for performance at every level, the RB17 pushes design and technical boundaries far beyond what has been previously available to enthusiasts and collectors.”

Introducing the RB17 👀 A new era of performance cars has arrived 🤘 pic.twitter.com/Pz3mxexzQU