Brown: I was asked a question, I just gave an honest answer 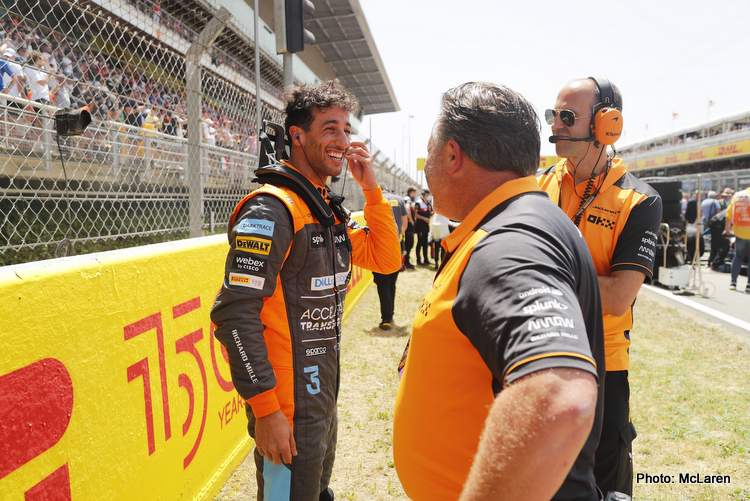 Zak Brown claimed his comments about Daniel Ricciardo’s 2022 performance not meeting expectations were an honest answer to a question, not more.

Daniel Ricciardo has been struggling to deliver results for McLaren in 2022, after a tough debut season with the team in 2021, where the only bright moment was his win of the 2021 Italian Grand Prix in Monza.

McLaren CEO, Zak Brown, did not hold back when asked about his troubled driver and admitted that his performance has not met neither McLaren nor Ricciardo’s expectations, raising speculation about the Australian’s future with the Woking-based outfit.

Asked if his comments have had any negative impact on his relationship with Ricciardo, Brown was quoted by Formula 1’s official website saying: “No, not at all.

“We have a great relationship and had dinner a couple of weeks ago in London,” he revealed. “We have good laughs together, and enjoy racing together, so the relationship with Daniel has never been better.

“I was asked a question and I just gave an honest answer,” the American went on. “I think Daniel has said the same thing; we are here to try and get towards the front.

“We’ve had some awesome weekends like Monza [where Ricciardo led home a McLaren one-two in 2021], and then some disappointing weekends.

The car is the problem, not Ricciardo

“Coming back to our car, I don’t think we’ve yet given our drivers a car that is capable of being at the front on a regular basis,” Brown Lamented, “so we need to do that.”

Brown was clearly trying to defuse the situation his comments have created, reiterating: “We have a great relationship, and I just gave an honest answer about a question about how things are going, and things could be going better

“But we’re going to work hard and make sure that they [go better] in the future,” he insisted.

“I think last year in Monza when we had a strong race car, we could see what Daniel and Lando [Norris] could do with it.

“I think we need to focus on giving our drivers better race cars. And I think Daniel is highly motivated, he has all of our support, and we’re having fun.

“I have a great relationship with him,” McLaren’s top man repeated.

Ricciardo has showed glimpses of improvement after a nightmare weekend in Monaco where he crashed in practice and finished the race in 13th.

He scored points in the following race in Baku were he beat teammate Lando Norris to eighth place, the latter finishing ninth.

The Honey Badger qualified ninth in Canada but finished the race 11th on a tough weekend for McLaren, where team principal Andreas Seidl apologized for both drivers for the horrible car they gave them.