Russell: We solve one issue and fall into another trap 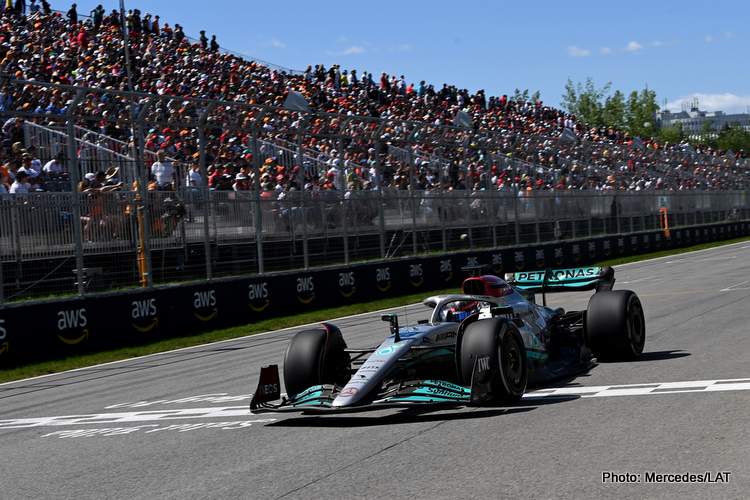 George Russell expressed his frustration as Mercedes continue to struggle with their 2022 Formula 1 car, as solving one issue throws the team into another trap.

Russell finished the 2022 Canadian Grand Prix fourth, behind teammate Lewis Hamilton who took to the podium in third.

The Mercedes W13 seemed a bit more well behaved around the Circuit Gilles Villeneuve, but looking ahead to the British Grand Prix in a fortnight, Russell is hoping the Silverstone track will be more kind to his Silver Arrow.

“I’d like to think the high-speed nature should suit us slightly more,” the Briton said of his home race. “But there’s no guarantees, every single track we’ve gone to, it’s sort of thrown an unknown at us.

“And we’re facing different issues every single race weekend,” Russell revealed. “So I’d like to think we’ll be more competitive, but I really don’t know.”

When pushed to elaborate, the Mercedes driver said: “Just with the overall car, we sort of solve one issue and we fall into another trap.

“Porpoising has been solved. But then when you run the car close to the ground, we’re hitting the ground quite aggressively.

No sweet spot for the W13 yet

“There doesn’t seem to be any sweet spot at the moment,” a frustrated Russell declared. “We’ve run high, we’ve run low.

“And the performance hasn’t improved or decreased, and the stiffness and the bottoming hasn’t really changed, surprisingly, I think.

The 24-year-old admitted the situation in Canada was “very promising at times”, adding: “But the actual pace deficit to the front-running car was still pretty substantial.

“So even though it looked on paper to have been a bit of an improvement, we’re still a long way from where we need to be. So we haven’t made a huge amount of progress as yet.

“But we’re still working as hard as we can to close the gap,” Russell maintained, as he continued his impressive run of finishing in the top five for every race this season.

Reposting this every Monday till the streak is broken. pic.twitter.com/eIaEQw3BAY