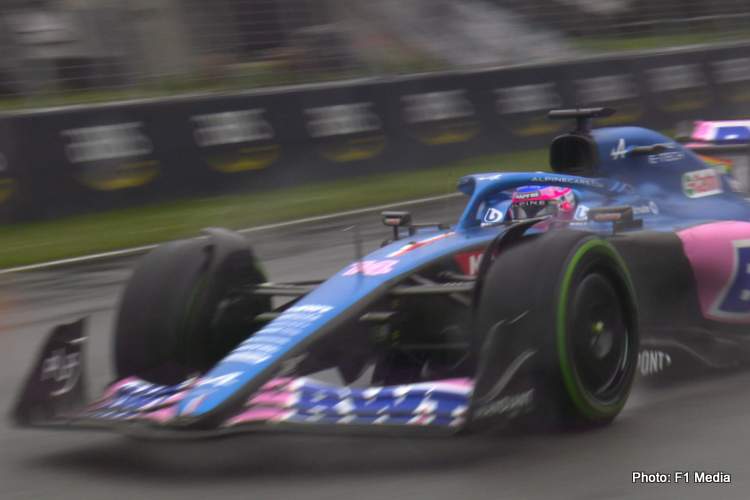 Fernando Alonso topped the final and very wet practice session in Montreal, as chaos prevailed with several drivers spinning in search for grip.

Pierre Gasly was second in the AlphaTauri, as Sebastian Vettel came third in the Aston Martin, as the German is showing a turn of pace at the Circuit Gilles Villeneuve.

Not much can be read into the times, but with qualifying expected to be held in wet conditions, this should make for an interesting shoot out for pole.

Charles Leclerc will not be giving any significance to qualifying as during FP3, news broke that Ferrari will be bolting a new power unit on the #16 F1-75, meaning the Monegasque will start his race from the back of the grid.

UPDATE: A new power unit has been fitted to Charles’ car prior to FP3. It is the fourth of the season (only 3 are permitted), therefore Charles takes a further grid penalty. #CanadianGP pic.twitter.com/JD1EnlcAKs

Leclerc did not even bother to set a time during Montreal’s FP3.

Max Verstappen dominated proceeding in Canada on Friday, going fastest in both FP1 and FP2, as Sergio Perez seemed to struggle.

Behind the Ferrari and Red Bull, it was interesting to see Sebastian Vettel as best of the rest as Friday’s track running concluded, while the Alpine seems to be a handy piece of kit around the Circuit Gilles Villeneuve.

The FIA’s technical directive remained the main talking point around the Formula 1 paddock in Canada, as the politicking went into high gear. F1 power struggles at its best.

Practice three started in rainy conditions, as both the air and track temperature dropped significantly from Friday, which should be interesting as the weather forecast for the race shows dry conditions, while there is chance to have a wet qualifying.

The first update on the track conditions came from Mick Schumacher as he reported to his Haas team over the radio saying: “The conditions are quite **** out here to be honest!”

With 20 minutes elapsed from the session, 11 out of the 20 drivers remained in their garages, waiting for he weather conditions to improve, as the drivers on the track were running the Full Wet tyres.

Max Verstappen finally ventured out on track with around 25 minutes remaining from the final practice session, as the wet condition persisted. He returned to the pit after one exploratory lap.

Red Bull team boss Christian Horner said FP3 will just be about the drivers getting to learn the track in the wet as qualifying may be run under the rain, but focus will remain on Sunday’s dry race.

“You live in hope that it’s going to improve a little [for qualifying],” Red Bull’s team principal told Sky Sports F1. “I think it’s certainly going to be wet, but maybe not quite at the intensity that we saw during the start of this session.

“The main focus is on tomorrow because that’s where the points are, but you’ve still got to have a car that’s driveable in these conditions.

“So, it’s about the drivers getting their eye in as to where the grip is and so on,” he concluded.

For reference, Pirelli opted for the softer range of their tyres with the C3, C4, and C5 compounds being made available for the teams in Canada.

With 15 minutes remaining, the Intermediate tyres made their first appearance with Fernando Alonso being the first to bolt the Green-banded tyres, followed by Carlos Sainz and Sebastian Vettel.

Alonso topped the timing screens immediately, but was soon pushed down by Vettel, the German seemingly fast this weekend both in dry and wet conditions.

With six minutes remaining, Kevin Magnussen brought out the Yellow flag as he skid into the grass at Turn 2, but was able to reverse back on track, with the session green lighted soon after.

However while reversing, Magnussen got into the way of Mercedes’ George Russell, but no contact was there, as Max Verstappen shortly followed in the footsteps of the Dane as he went down the run-off area at the same place.

Now Verstappen is off at Turn 2!

Max manages to avoid the barriers and gets going again as the clock ticks down on FP3 #CanadianGP #F1 pic.twitter.com/RIFsr72wDK

Alonso set his best time on the Intermediate tyres later in the session as the track dried out a bit, which was a 1:33.836.

Pierre Gasly improved in the last seconds of the session to take second, 0.053s off the pace, thus pushing Sebastian Vettel down to third, the German 0.002s slower than the Frenchman.

Who had this order at the start of the session?! 😃#CanadianGP #F1 pic.twitter.com/116jAj6CJ9

Esteban Ocon was fourth in the other Alpine, 0.167s off the pace of his teammate, as Daniel Ricciardo posted the fifth fastest time, a 1:34.110.

Lando Norris was sixth fastest, 0.138s slower than Ricciardo, as George Russell was 0.011s further down the road in seventh, while Lewis Hamilton was 15th fastest 1.856s off the pace in the other Silver Arrow.

Sergio Perez was eighth for Red Bull, over sixth tenths down from the top time, as Max Verstappen – with very limited running – was 0.118s behind him in ninth.

Carlos Sainz rounded off the top ten 0.942s slower than his session-topping compatriot. 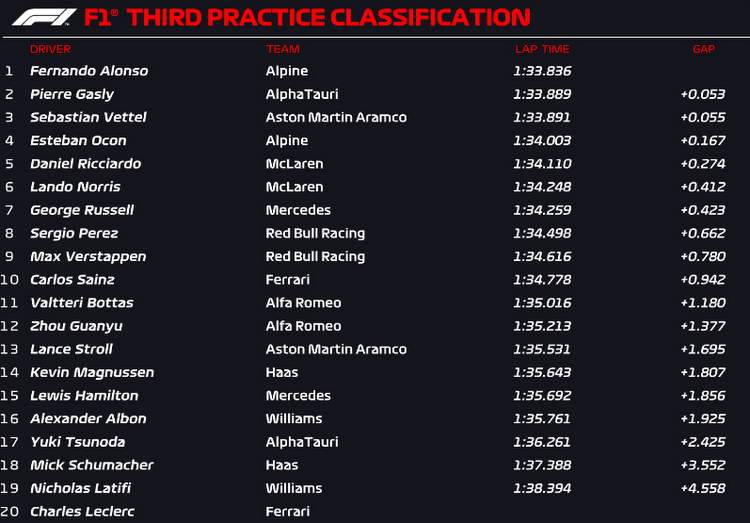