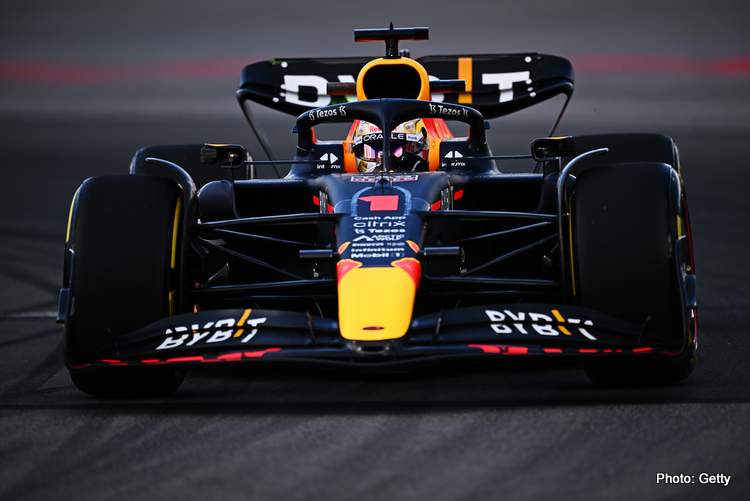 Montreal welcomed Formula 1 back at the Circuit Gilles Villeneuve for the first time since 2019, and Max Verstappen was the first driver to get up to speed going fastest in FP1.

Verstappen kept his momentum from Baku to go fastest in FP1 in Canada, as Carlos Sainz went second fastest, while Fernando Alonso was a surprise third for Alpine.

The chequered flag at the end of FP1 was the first to be waved in Canada since F1’s last visit 1104 days ago.

We’ve been going through something

And finally, we see another chequered flag in Canada! 🏁#CanadianGP #F1 pic.twitter.com/6Uqgwbb4E8

A lot to look forward to in Canada, after the dramatic events of last week’s grand prix in Baku, be it Ferrari’s ongoing implosions, or Mercedes’ chronic bouncing, and last but not least, which of the drivers will be gracing the Wall of Champions this year.

Ferrari head to Montreal trying to find positives within their recent troubles, as Charles Leclerc is still feeling the pain of two DNF’s – Barcelona and Baku – in three races, as he now contemplates how to recover the 34-point deficit to Championship leader Max Verstappen.

Mercedes have their own troubles to think about, as the Circuit Gilles Villeneuve should be a track that induces “porpoising”, or is it bouncing, but it may also be bottoming in their ever troublesome W13.

The FIA announced they will be clamping down on the “bouncing” for the sake of the drivers health and safety, after Mercedes themselves and their drivers were the major plaintiffs against the phenomenon.

The World Champions – not wrongly accused of trying to push for a regulation changes – could end up shooting themselves in the foot, as the quick fix will be raising the car’s ride height, something the Silver Arrow does not enjoy.

Montreal received the F1 circus with a stormy weather, but it cleared up in time for FP1 as the new generation of F1 cars ran in anger around the Circuit Gilles Villeneuve.

The news from the Canadian paddock that Leclerc’s power unit from Baku is a write-off as Ferrari were giving him a new one for this race, taking a grid penalty on a track that allows for overtaking.

Yuki Tsunoda is also set to start from the back of the grid, for having new power unit components on his car this weekend.

With almost 15 minutes elapsed from FP1Williams’ Alex Albon went on his team radio reporting:”My seat is very hot on the left side.”

A couple of minutes later, Alpine’s Esteban Ocon reported brake trouble, the front right to be precise, which turned out to be a failure in the brakes, as he returned to the pits with a smoky car.

Debris on the circuit looks to have overheated the brakes #CanadianGP #F1 pic.twitter.com/SP5qE5sbC1

It turned out to be a paper towel that got stuck in Ocon’s right brake duct, causing the problem for the Frenchman, which was removed and he was off again.

Halfway through the session, Lewis Hamilton reported struggling with his car, reporting over the team radio:
“I’ve got no rear end, man..”

Fernando Alonso was almost going to be the first driver to touch the wall of Champions. He is a double Champion after all, but he got away with it this time.

At some point, Max Verstappen reported having his “inside wheel in the air”, and head back to the pits for the team to have a look at his rear roll bar, and was soon back out on track, setting the fastest time soon after.

Red Bull boss Christian Horner told Sky Sports F1 that there are no updated for the RB18 this race, and said: “It’s the same Red Bull that it was seven days ago.

“Obviously with a tight turnaround between the races it’s very difficult to bring in anything new here, particularly with the budget cap as well this year,” he added.

But it was Yuki Tsunoda who got the first official kiss from the Wall of Champions, but lived to fight another day.

Maybe a sign of things to come from the Japanese driver?

Towards the end of the session, a groundhog almost caused an international crisis between Canada and Spain, as it dashed onto the track and almost got runover by Fernando Alonso and Carlos Sainz. A close call there.

Verstappen’s session topping time was a 1:15.158, compared to 1:10.240 which was the last pole clocked around the Circuit Gilles Villeneuve that belongs to Sebastian Vettel back in 2019 when he was still a Ferrari driver.

Carlos Sainz was the second fastest, 0.246s off the pace of the reigning World Champion, as compatriot Fernando Alonso was a brilliant third in the Alpine, 0.127s further down the road.

Worth noting is that Alonso’s best time was set on the Medium compounds, while the top two times were set on the Soft. In comparison, Esteban Ocon was only 15th fastest in the other blue and pink car.

Sergio Perez was fourth fastest in the sister Red Bull, 0.461s off the pace of his teammate, but only 0.047s ahead of Charles Leclerc who was only fifth fastest.

The leading Merecedes was George Russell, sixth fastest 0.664s down from the top time, while Lance Stroll had an encouraging start of his home weekend, seventh fastest 0.719s away from the benchmark.

Lewis Hamilton was eighth fastest in the other Mercedes as he registered the exact time as Stroll, a 1:15.877, but since he did that after the Canadian, he had to slot in behind him.

Sebastian Vettel made it an excellent FP1 for Aston Martin as he was ninth fastest 0.883s away from the best time of Verstappen.

Daniel Ricciardo lead the way for McLaren, another good sign for the Aussie, who was tenth fastest 0.925s too slow, but 0.128s faster than teammate Lando Norris who was twelfth fastest. 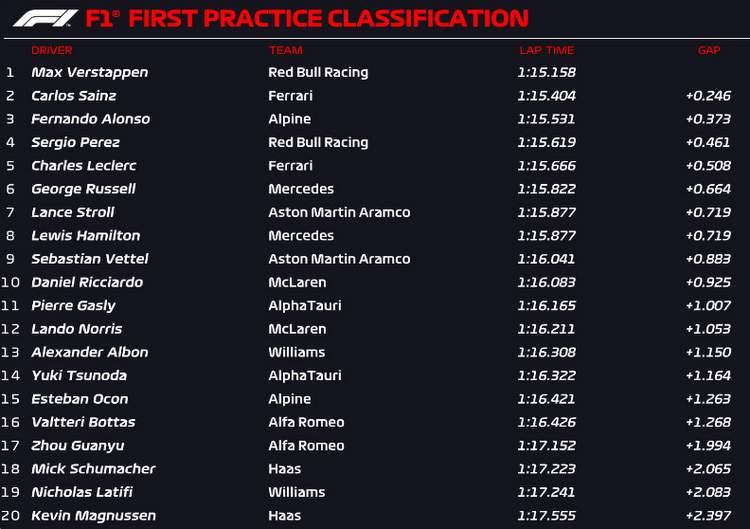