Villeneuve: I once hit a bump in Argentina and saw stars 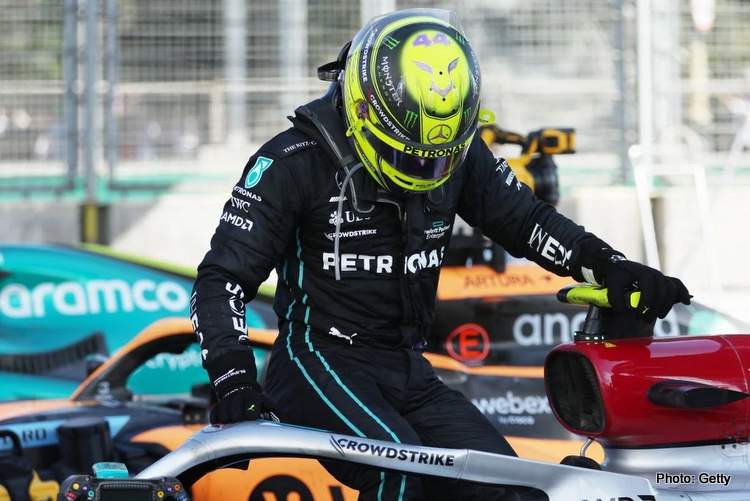 Jacques Villeneuve understands Lewis Hamilton’s pain driving this year’s Mercedes, recalling a personal experience when he saw stars after a hitting a bump while racing in Argentina.

Lewis Hamilton received a battering from his W13 in Baku, as he raced to fourth place, with talks about his ability to drive in Canada next weekend doing the rounds within the Formula 1 community.

The Briton has since confirmed that he will be racing in Montreal, but Jacque Villeneuve admits that what Hamilton has to endure from his viciously bouncing Silver Arrow is painful, not to mention having to settle for midfield status in 2022.

“Hamilton is having a hard time, also with his back problems,” Villeneuve wrote in his formule1.nl column. “That is a serious matter: damaged vertebrae can cause you problems for months if not years.

“In the 90s we also had this problem because we were so low to the ground. I remember clearly that I once hit a bump in Argentina and saw stars. It felt like an electric shock went right through my body,” the Canadian revealed.

Hamilton’s teammate has been vocal about the safety of the ground effect cars, as well as Mercedes Boss Toto Wolff, who want the regulations to be changed, but Villeneuve is having none of that.

“I understand Russell and Wolff’s concerns but I have the solution for Mercedes: raise the car’s ride height,” he bluntly stated.

“Nobody is forcing them to drive so low, perhaps the car is sensitive to this due to minimal sidepods. But Wolff’s call for a change of rules is, in my opinion, nothing more than the usual political game in Formula 1.

“Mercedes will do everything they can to get close to Red Bull and Ferrari, just as they have wanted to change as little as possible in recent years,” the 1997 F1 Champion pointed out.

However, Villeneuve was full of praise for Russell, and said: “Look at Russell: he’s just behind Leclerc with a car that’s one second slower! Imagine Mercedes finds something.

“I have been very impressed with how Russell has been maximising his opportunities,” he admitted.

Reposting this every Monday till the streak is broken. pic.twitter.com/hpMXQWZtUp

Leclerc shouldn’t distance himself from Ferrari

As for Charles Leclerc and Ferrari, Villeneuve touched on their situation after they double DNF the team suffered in Baku, and called for solidarity within the Red camp.

“Leclerc bears very little blame for all this, in my opinion,” he said. “Apart from the mistake in Imola, he is driving well. It would only be logical if the last three races have caused him frustration.

“That’s not something I approve of though, because you win and lose together and as a driver you should never distance yourself from the team. But Ferrari does have a problem.

“In Baku, three cars retired due to problems with a Ferrari engine. Sainz’s problem was the hydraulics, but this was nevertheless dangerous because the rear brakes stopped working.

“All in all very disappointing, but the car remains lightning fast and is good to drive. The championship still has a long way to run, and it could turn around in an instant,” the 51-year-old insisted.