Russell: No one is saying this to gain any advantage 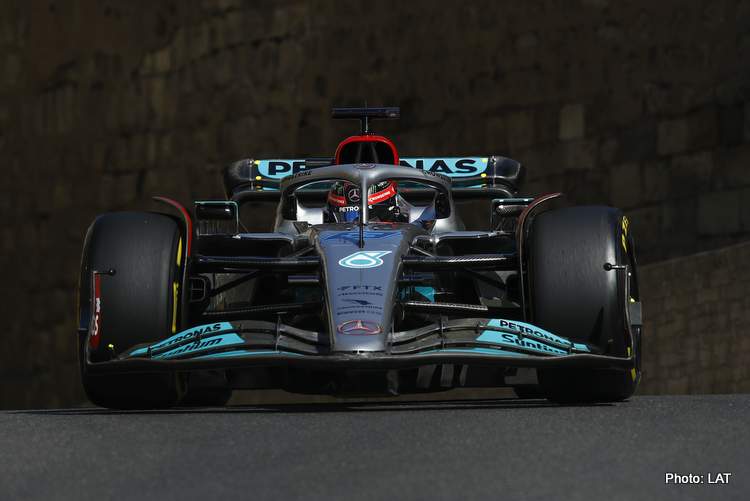 George Russell hit back at Christian Horner’s claims that he and Lewis Hamilton are complaining about “porpoising” to serve Mercedes agenda to modify the rule, insisting they are not seeking to gain any advantage.

Both Mercedes drivers had a tough race in Baku, as their Silver Arrows were brutally bouncing throughout the weekend, with Lewis Hamilton even struggling to climb out of his car at the end of Sunday’s race.

Russell even claimed that the bouncing could become a safety hazard, but Red Bull boss Christian Horner rubbished those claims, insisting Mercedes is pushing its driver to run the team’s narrative as they push to get the regulations changed, since they are unable to fix their 2022 Formula 1 car, whilst other teams have.

Asked by Sky Sports F1 what he thought of Horner’s claims, Russell said: “No one is saying this to try and gain any advantage.

“You’ve got the Ferrari drivers, and even Max [Verstappen] saying how tough it is,” he added.

“You’ve either got porpoising and the car is hitting the ground or you have to run the car millimetres, perhaps one centimetre, above the ground and you’re smashing the bumps.

“So whichever way you’ve got it, it’s not great for anyone. Something will happen. There’s no doubt about it,” the Mercedes driver insisted.

“But I don’t know what the solution is, to be honest,” he admitted. “At the end of the day, the majority of us are in the same boat.”

Mercedes seemed to have found a solution to their problems at the 2022 Spanish Grand Prix, but things seem to have gone backwards in Monaco and Baku.

“It does feel worse,” Russell reflected. “At the start of the season we had this porpoising and it was a slower, sort of wavey effect.

“Since Barcelona, we’ve got a different kind of issue. They’re not straightforward these cars, no doubt,” he revealed.

“I was pretty pleased to see the race come to a close because I was smashing the ground every single corner, every single lap out there for an hour and a half [and it was] pretty brutal,” the 24-year-old spoke of Baku, a race he finished third.

“It’s what we’ve got to deal with and live with at the moment, and we as drivers have to expect. There are not going to be any short-term changes but there are conversations ongoing about what the long-term future of these regulations hold.

“Let’s see. We’ve got a lot of brilliant engineers and intelligent people in the sport and I’m sure they’ll find a solution,” Russell concluded.

George Russell is currently fourth in the Drivers Standings, with 99 points, 17 points behind Charles Leclerc in third.