Brundle: Leclerc feeling as bruised as Hamilton’s back 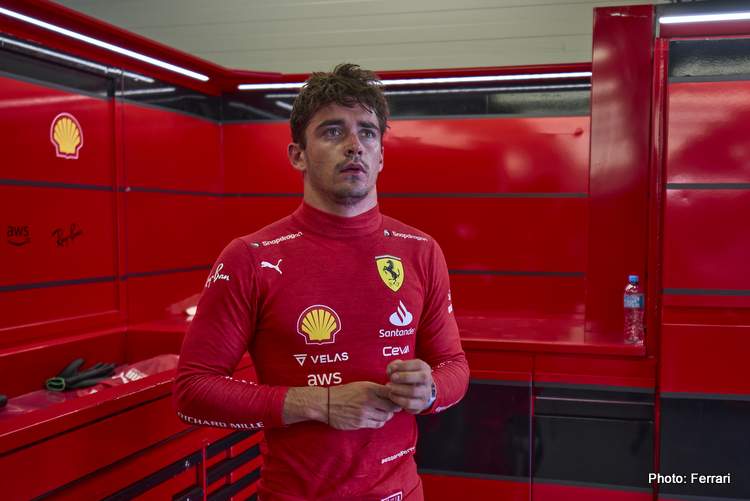 Martin Brundle reflected on Charles Leclerc’s feelings after his DNF at the 2022 Azerbaijan Grand Prix, claiming the Monegasque must be feeling as bruised as Lewis Hamilton’s back.

Leclerc’s bruises are more emotional than physical, as is the case with Hamilton, but Brundle believes that the series of problems that have beset the Ferrari ace’s season so far are costing him a lot while affecting the relationship he has with his team.

“We’re into the thick of a 22-race season, races are coming relentlessly at us. If you’ve got one big issue, you go and fix it, but there are various gremlins that Ferrari are having,” Brundle told Sky Sports F1.

“Charles Leclerc must be beside himself,” he added. “He could have had four glorious victories; he’s sticking the car on pole position, driving beautifully and then this kind of thing [engine failure] is happening to him just way too much.

“Reliability is costing him heavily now, a chance at becoming world champion. Strategy cost him in Monaco of a chance of a glorious victory in his hometown.

“He loves Ferrari and Ferrari love him, in a way that, the last time I saw something like that was between Michael Schumacher and the Ferrari team.

“There’s an awful lot of love to burn through there but right now, Leclerc must be feeling as bruised as Lewis’ back,” the Formula 1 driver-turned pundit insisted.

Surprised Mercedes can’t get a handle on their car

Mercedes are moaning about their “porpoising” issues, and talks about changing the rule to eradicate the bouncing phenomenon took center stage in Baku, but Brundle believes it’s up to Mercedes to fix their problem.

“The teams that have got it sorted are clearly saying that’s Mercedes’ problem and it’s not Formula 1’s problem,” he said. “There’s no doubt about it, it looks particularly uncomfortable.

“Of course, [Mercedes] can fix it by raising the car but then they lose a huge amount of performance,” Brundle pointed out.

“So, they need to get the car low, stiff on the suspension and stiff on the side wall of the new tyres as well, and they’ve had to sacrifice comfort for performance.

“What’s surprising, really, is that Mercedes just can’t seem to get a handle on what looks like, actually, quite an excellent car, if they could just unlock it,” the 63-year-old wondered.

Brundle reflected on his own experience with the “porpoising” when he was still a driver back in the 1980’s and recalled: “Generally, we had porpoising back in the 80s.

“When you have these ground effect cars, it’s always been in issue,” he went on. “It is still in sports car racing; I was at Les Mans and in the prototypes there they have porpoising and ground effect issues in terms of bouncing.

“It needs managing,” Brundle stated. “To ask the other teams to change the regulations to help Mercedes, is a bit like asking a turkey to vote for Christmas.

“I’m not underplaying what George Russell and Lewis Hamilton are going through, because it does look particularly painful.

“And, the Ferrari drivers just at the crucial breaking points that looks plain tricky to me, I don’t know how they go into the corners frankly,” the veteran of 158 grands prix admitted.