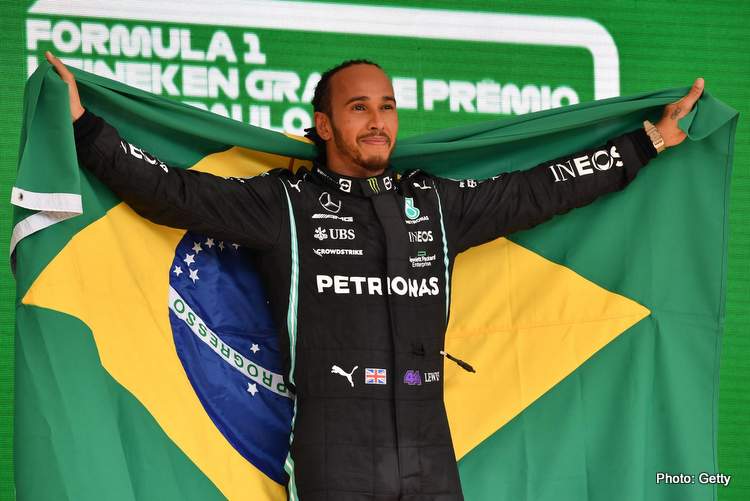 Lewis Hamilton was made an honorary citizen of Brazil on Thursday, as the lower house of parliament passed a bill on the matter.

The seven-time Formula 1 World Champion said he was speechless after being made an honorary citizen of Brazil when the lower house of parliament passed a bill on Thursday.

The move had been proposed by congressman Andre Figueiredo after last year’s Brazilian Grand Prix was won by the British driver who unfurled the Brazilian flag at Sao Paulo’s Interlagos circuit.

Hamilton backed the move in April, when he visited Sao Paulo to deliver a keynote speech at an event focused on business and digital transformation, saying he would be honoured.

“Today I was granted honorary citizenship to one of my favourite places in the world,” Hamilton, who is racing in Azerbaijan this weekend, told his 28.4 million followers on Instagram.

“I don’t really have the words right now. Thank you Brasil, I love you, I can’t wait to see you again.”

Soccer great Pele, 81, responded to the post: “Congratulations, Lewis. I am happy that, from now on, I can consider you a countryman.”

The lower house will now hold a solemn session to deliver the 37-year-old the honorary citizenship. A date is yet to be set.

Figueiredo, a member of Brazil’s Democratic Labour Party, praised the Mercedes driver for celebrating the country at last year’s race and noted he has always held up the late Brazilian triple world champion Ayrton Senna as his boyhood idol.

Hamilton, knighted by his own country, had his name chanted along with that of Senna, a local hero, as he carried Brazil’s flag on to the podium last year.

Congressman Jhonatan de Jesus of the Republicans party said in a report that Hamilton has a “deep and strongly emotional” relationship with Brazil and the tribute was well-deserved.

“His gestures add to his indisputable sporting merit. His public positions in support of relevant issues such as the environment, animal rights, Black people, women and human rights must also be remembered and highlighted,” Jesus said.

The Congress vote was largely symbolic as the debate lasted for about 10 minutes. Some members of Congress, however, met the bill with criticism.

“I recognize Lewis Hamilton’s achievements…but this bill makes clear that we are not addressing Brazil’s structural problems as a priority,” Tiago Mitraud of the New Party said. (Writing by Gabriel Araujo in Sao Paulo, additional reporting by Alan Baldwin)