Wolff won’t ask Hamilton to move aside for Russell 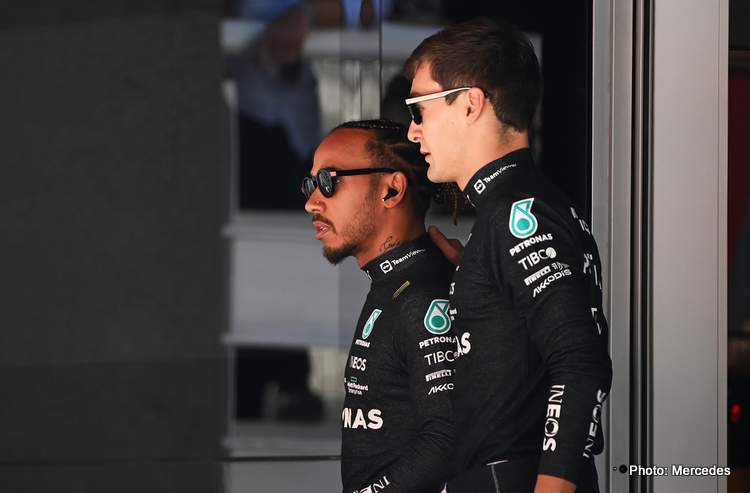 Mercedes boss Toto Wolff is adamant he will not impose team orders to ask Lewis Hamilton to move aside for George Russell should the need for that arise.

Seven-time Formula 1 Champion Lewis Hamilton finds himself 28 points behind George Russell in the Drivers’ Standings six races into the 2022 season, and should Mercedes – seemingly recovering from their slump – find themselves in a Title fight requiring team orders, will they make the call?

“No, 100 per cent no,” was Toto Wolff’s response to the question in an interview with The Telegraph.

“One hundred per cent we will allow them to race until a driver is mathematically out of contention, we’re not making such a call,” he added, and whether he would ask Russell to move aside for Hamilton, he said: “It makes no difference.”

Monaco may not be good for Mercedes

Mercedes do not seem to be on the pace in Monaco, but Wolff insists they have turned a corner after their race in Barcelona.

“Absolutely I meant it,” he said. “You know, ultimately I’m a pessimist by nature. For me the glass is half-empty, not half full. But [Barcelona] was the first time that I saw a performance of a car and driver like in the past years.

“When you look at Imola [last month, in what was the team’s nadir, with Hamilton eventually being lapped by race winner Max Verstappen] we got stuck in no man’s land, and we couldn’t overtake,” Wolff pointed out.

“In Spain Lewis was 30-odd seconds behind the last car in the field and he finished fourth [sic]. So that is a car that is capable of winning a race.”

However the Mercedes boss feels Monaco will not be so kind for the Silver arrows admitting: “We might take one on the nose here. Finish 10th and 12th.

“But it’s not going to change my opinion that the car was quick in Barcelona and that is encouraging,” he insisted.

Hamilton won’t get over Abu Dhabi 2021

Wolff touched on Abu Dhabi’s 2021 season finally – yet again – saying Hamilton will never get over what happened there.

“You know, I had dinner yesterday with the coach of Juventus, Massimiliano Allegri and he started the conversation saying ‘None of us can believe what happened to you in Abu Dhabi!’ And we were like ‘Neither can we’,” he revealed.

“It is still so surreal. And that’s going to stay with Lewis forever. Because in effect he won an eighth world championship.

“Then he finds himself on the back foot,” he went on. “And most importantly the car is a b—h to drive. And Lewis is like ‘Four months ago I competed for the world championship in a car that was great. And suddenly the car is undrivable.’ And that also needs recalibration of your own expectations. But I think he has that now.”

Wolff said that despite the troubles his team are currently enduring, he still has the drive to lead the team – of which he is part owner – claiming that problems energize him even more.

“I’m running at 100 per cent [motivation-wise],” he claimed. “I’m actually really well balanced when I have problems to solve. What’s not good for me is contentment.

“In 2020 I wasn’t good at all. I mean, Covid didn’t help. But it was important at that time to reflect, is this my niche? Is this what I want to continue to do to the end of my business life?

“In the end, I came to the conclusion ‘I love this sport, I love the competition, I love the honesty of the stopwatch.

“But this is my team. I’m a third shareholder. I don’t want to sell it. I want to run it in an executive function. Maybe I’ll find a team principal that is better than me.

“I wish I would come across someone that would fit into the organisation,” the Austrian mused. “It’s not not necessarily whether I think someone is capable intellectually, or understanding the sport.

“It also needs to be fitting into the group. Because if you’re parachuting someone in that isn’t respected in the group, he’s going to struggle. So far I haven’t found anybody,” Wolff maintained.