Hamilton: Feels like my eyeballs are coming out of their sockets 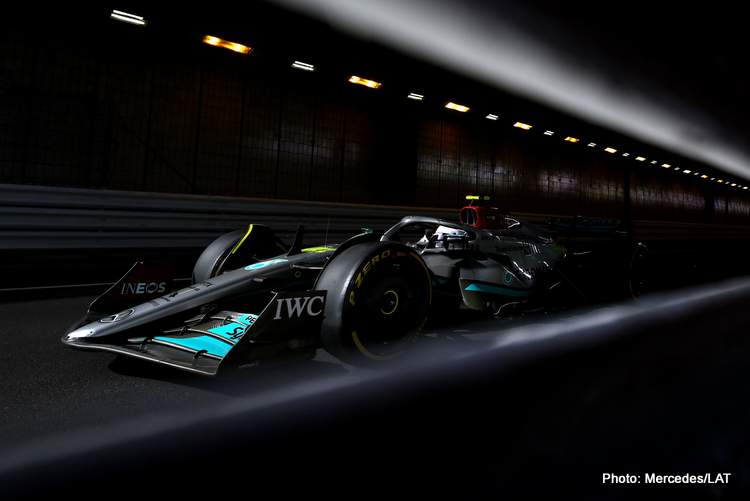 Lewis Hamilton reflected on his first day of driving a 2022 Formula 1 car around Monaco, as he felt his eyeballs were coming out of their sockets from the extreme bouncing.

Hamilton was vocal about the bouncing of his W13 around the streets of Monaco over the team radio during FP1 and Fp2 which he finished tenth and 12th respectively.

The new F1 cars are heavier, and with their ground-effect concept, were being set up as low as possible and as stiff as possible in order to maximize the downforce, a necessity around Monaco.

The result was drivers locking up all over the place as they tried to get to grips with their new rides around the tight streets of the principality.

Hamilton fighting to put a lap together

“I was fighting to put a lap together out there today and it’s a very different experience to previous years here in Monaco,” said Hamilton in the team’s post practice report.

“Back in the day, I remember coming here with lighter and more nimble cars, but they are now a lot heavier, and that changes the driving experience quite a lot.

“The track’s been resurfaced but it’s probably the bumpiest circuit I’ve ever driven – at points, it feels like my eyeballs are coming out of their sockets with the bumps,” the Briton claimed.

“The car was bouncing quite a lot today on the bumps, not the aerodynamic bouncing like we’ve had so far this year, but just because we’re running it low to the ground and stiff as well, so we’re bottoming out quite a lot.

“We improved the car for FP2, and we’ve got some studying to do tonight to find the right mix between ultimate performance and a driveable balance.

“I haven’t put my best sectors together yet, and actually the grip feels pretty good when we’re pushing,” he revealed.

“Ultimately, I think we’ve got the potential to be up there in the mix; maybe not quite on the speed of Ferrari and Red Bull, but I hope we can be ahead of everybody else tomorrow and on Sunday,” Hamilton hoped.

Back in the hot seat for FP2. 👊 And with some extra padding too. pic.twitter.com/fyvxcaQTkW

A better day for George Russell

George Russell seemed to have a better day than his teammate, faster than him in both practice sessions, something that has become a trend of late.

Russell said of his Friday: “It’s been a relatively good day I think but it’s clear we’re not yet where we want to be in terms of performance.

“Monaco is a very tricky circuit with these cars – they are set up very stiff for the aero to work, so it’s not easy to put the car on the limit on a bumpy street circuit like this.

“You’ve got to give the circuit a little bit more respect than you normally would, and there are parts of the circuit where we’re almost doing a wheelie with both front tyres off the ground,” Russell revealed.

“We’ve got some work to do overnight to see how we can make it a bit easier to drive,” he added. “At the front, Ferrari are flourishing again – we saw in Imola how good they were over the kerbs, and this is playing to their strength here, too.

“We now need to get our heads down and see what we can do for tomorrow, so that we’re at least best of the rest behind Ferrari and Red Bull,” the 24-year-old concluded.

Friday in Monaco ✅ A positive step forward for George.

Lewis ends the day in P12 – he just wasn’t able to get a clean lap in during that session pic.twitter.com/wrkuFF113o