TeamTalk: Who’s in control of this F1 championship? 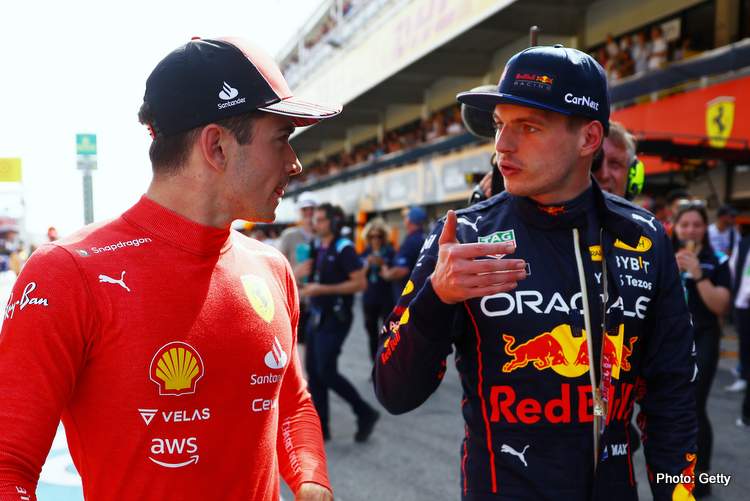 The Spanish Grand Prix proved to be a race with major ramifications for the 2022 Formula 1 World Championship, Red Bull lead both, Ferrari chasing for the first time this season and Mercedes look like they are back in it.

Many talking points at the sharp end of the (unusually) highly entertaining race at Circuit de Barcelona-Catalunya, begged the questioning the headline: Who’s in control of this F1 championship?

Kevin Melro: Verstappen shows he makes the difference even in a lesser car

My gut says Ferrari remain a cut above the rest despite the Scuderia now in the chasing position of both championships. It’s perplexing to think Red Bull have neutralized the hole they dug themselves in the first three races, as it was starting to look bleak for the Austrian outfit.

We’re also in an era of racing where a DNF is an equivalent to a black eye; accumulate four in one year and forget about the drivers’ championship, accumulate six as a team and you’re climbing a mountain.

Let’s not forget, that Verstappen barely got away with three non-finishes last year. With the two DNF’s Max had in the first three races this year he was already halfway to an unattainable championship yet miraculously, Verstappen has turned it around.

The F1-75 is a slick package, Ferrari are winning the qualifying fight and have twice absolutely obliterated Red Bull on Sunday when pace truly matters; Australia and Spain. Yet at the same time, Ferrari have let the Bulls completely off the hook.

Given Leclerc’s pace during the Spanish Grand Prix, Ferrari are easily winning the development battle, but Max Verstappen, just as last year and the years before that, proving again that he makes the difference even in a lesser car. 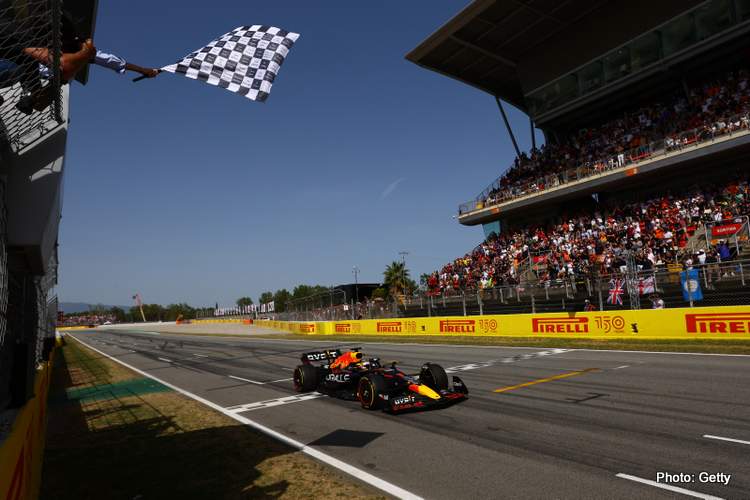 David Terrien: Barcelona was an obvious turning point in the 2022 F1 Championship fight

After trailing all year, two DNFs not helping his cause, Verstappen and Red Bull took the lead of both Championships for the first time since the start of the season.

In terms of pure pace, Ferrari and Charles Leclerc still look a bit faster, taking four out of six pole positions so far, and quite comfortably leading Sunday’s race before a Power Unit failure denied him what appeared to be a comfortable victory.

However, Red Bull looks stronger. Verstappen made a mistake in Barcelona but it was not as expensive as Leclerc’s excursion at Imola.

On Sunday, under scorching bright blue Spanish skies, Max even managed to win with a capricious DRS and has a remarkable record of winning all races he finished in 2022.

It looks like Red Bull’s reliability issues are gone, they survived extremely demanding and hot conditions in Barcelona when at the same time Leclerc and Ferrari suffered their first reliability issue so far.

All momentum has shifted in Verstappen and Red Bull’s direction, and they look to be the best package for the win. They might not have the raw speed of the Ferrari yet, but they look to be gentler on tires and make the best out of it in race conditions.

Yes, Verstappen has been struggling a couple of times with the car balance, fighting the car in qualifying but then Perez steps in and takes pole in Jeddah, and Verstappen is always back at the front and winning on race day.

The Red Bull pair also looks stronger than the Ferrari duo. Perez is not always in the top four in Qualifying but he is known for being gentle on tires, he is used and is doing an amazing job as number two. He is actually so good at it that not only he directly helps Verstappen on track, but he also allows Red Bull to play with strategies and corner Ferrari when needed.

On the other side, Leclerc is undoubtedly having his best season ever, but he made a mistake in Imola, and it is his first Championship fight in F1, while Verstappen already has a title in the bag giving him this extra confidence while knowing he can do it again whatever the circumstances are.

Right now, Sainz is the Achilles’ ˈheel of the Scuderia since he lacks the pace, he is making too many mistakes and might not be as dedicated to the team cause and its leader as one would expect, as Perez is at Red Bull, when the situation requires it.

Saying it this way seems like it is a done deal for Verstappen and Red Bull but luckily, we are only at Round 6 of the Championship and the momentum can switch again.

Ferrari has the speed and doesn’t need much to convert it on race days. Mercedes seems to be closing the gap, and we hope Barcelona was not just luck since it would be awesome having a fight involving three teams and six drivers for the win.

Leclerc and Verstappen look strong for Monaco but they both have a history of doing rookie mistakes in the past when qualifying around the tricky streets of Monte Carlo.

These mistakes could play a crucial role in Saturday qualifying, where like no other track,  pole should be the race decider. Overtaking is almost impossible, and the undercut does not work well in 2022 due to the reduced heat of tyre blankets as per new rules

Therefore expect qualifying will be key and it should be spectacular, I think it is the right track for Leclerc to get back in the lead of the points race. 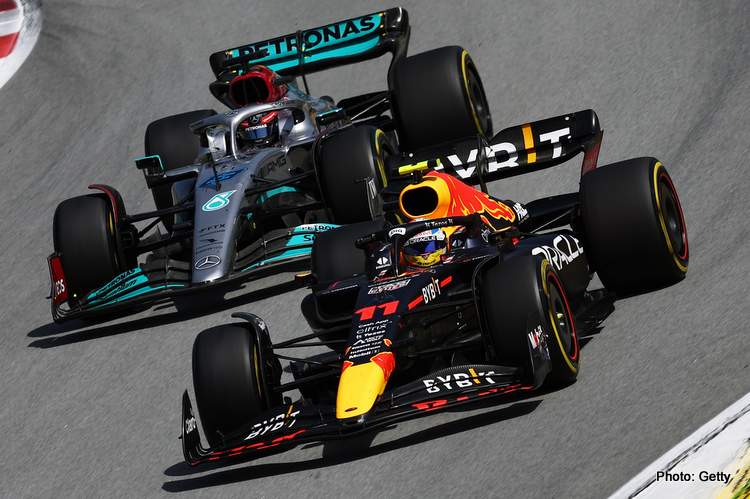 Up until the Spanish Grand Prix, the trend seemed to be that Ferrari’s F1-75 was faster around one lap, as Red Bull’s RB18 seemed to be the better racing car, with Ferrari getting more pole positions, but then suffering from tyre degradation during the race, giving the upper hand to Red Bull on Sundays.

Both the Red car and the Blue car have been evenly matched up to now. At a certain circuit, the Ferrari may fast in some sectors, the Red Bull in others, but the combined sector times even out the differences. Something we saw in 2021 between Red Bull and Mercedes.

But while Ferrari stuck with their launch spec car up to Barcelona, Red Bull have been updating their car, and by Miami, you could see the RB18 began gaining some edge, not much though.

I feel Ferrari’s Barcelona upgrade package has recovered any deficit to Red Bull and even helped the Scuderia pull ahead in terms of raw pace, again evident from Leclerc’s pole last Saturday.

Leclerc complained about tyre degradation on the long run simulations, but the team seem to have found a way to reduce it as the weekend progressed, and the problem was reasonably in check on Sunday. Progress there.

Red Bull was formidable during the race with Verstappen’s qualifying run on the Softs when Red Bull changed his strategy very impressive.

A word on Mercedes who seem to have sorted their bouncing, and automatically edged closer towards the top two teams, and as they now focus on updating the W13, they may very much become a threat.

In summary, Barcelona tells us that Ferrari and Red Bull balanced their performance out again, and Mercedes is lurking in the back ready to pounce. Interesting times lie ahead…

Paul Velasco: After Barcelona Mercedes are back in it, RBR and Ferrari should be worried

The tide turned faster than I expected. We arrived in Barcelona after five rounds in the title race ticked off, Max trailing Charles by 19 points and now head to Monaco with the reigning Wolrd Champion leading by six; Red Bull also took the lead over Ferrari in the constructors’ race.

History shows that there are few teams, if any, that can match Red Bull’s development pace during the off-track arms race to improve cars race by race. Adrian Newey’s cars tend to get better and better with every outing.

Granted Ferrari and Charles appear to have the better package, but do they really?

I will go out on a limb to guess that the Maranello boys decided to unleash a few more ‘race-horsepower’ in their hitherto bullet-proof PU, and it was grand for qualifying on Saturday, and superb from start to lap 27 of the 66 lap race.

Then the turbo went poof. I was taken by Leclerc’s easy acceptance of the failure while he led so majestically, and the damage the DNF did to the championship. Prompting me to assume that he wanted more race pace power, they gave it to him, and he broke it. So he can’t complain.

For sure Ferrari are not going to throw in the towel, but while Mattia Binotto and his men seem a tad relaxed regarding upgrades, their rivals work furiously at improving the RB16 with every race. No wonder they want the budget cap increased!

I will venture Red Bull and Ferrari packages are about the same, give and take, here and there, the F1-75 is a tad better than the RB13, and vice versa. The difference is clearly made by the driver and, for now, Max and his team have the momentum.

Furthermore, they know how to fight a season-long title battle, Ferrari has no experience on this front since the Binotto era took over. This will be telling.

Now it’s about who has the most steam to keep the pressure on every race weekend until the end of the season, around when this one is likely to be decided.

But before we get carried away there is Mercedes now! If I were the pacesetters, Barcelona would be a warning that Mercedes are back in it or nearly; perhaps lagging a tenth here or there, but with Lewis Hamilton and George Russell in the cockpits, the Mercs are looking, perhaps not mighty yet, but indeed formidable again.

Their upgrades did away with the porpoising that crippled the W13 and hampered its drivers before Spain, they also took the biggest strides since Miami of any other team and, if that upwardly mobile trajectory continues be sure Lewis and George will be in a mix and, who knows? this could turn into a three-team shot at the constructors’ F1 title and maybe a four-driver race for the drivers’ crown.

Our Barcelona preview predicted the winner in Spain would be a coin toss-up between Charles and Max; the Red Bull guy won this toss as we know

Sunday in Monaco? The same thing applies, toss a coin and call Max or Charles. However, if it miraculously, lands on neither but, ends up standing on its side: That’s a Mercedes bloke for the win!

So to answer the question of this TeamTalk: No one is fully in control of this championship, yet…