Brundle: Verstappen’s victory in Spain not his finest 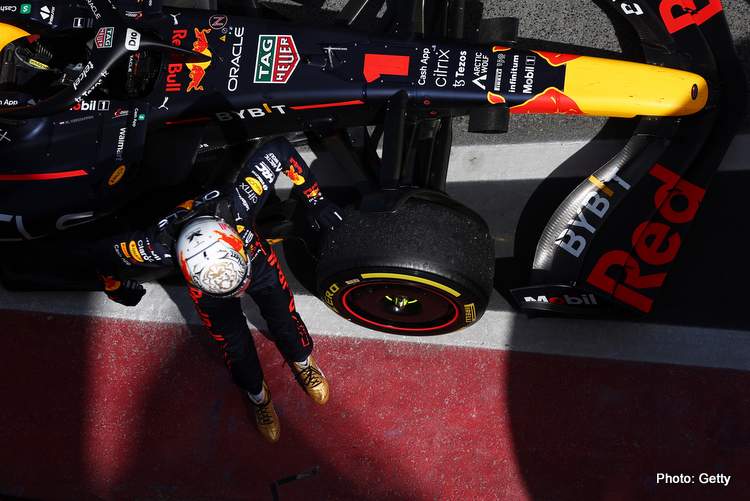 Max Verstappen won the 2022 Spanish Grand Prix in Barcelona last Sunday, but Martin Brundle does not see it as the Dutchman’s finest victory.

It was a tough race for Verstappen, suffering from a problematic DRS on his RB18, and also going on a trip to the gravel at Turn 4 early on in the race due to a gust of wind, but went on to win after Red Bull’s bold strategy, as well as Charles Leclerc’s DNF after a MGU-H and Turbo problem on his F1-75.

Brundle reflected on the reigning Formula 1 Champion’s victory in Barcelona with Sky Sports F1, and said: “Max’s 24th victory, matching the great Fangio, wasn’t his finest, partly due to a malfunctioning DRS rear wing flap, also a trip through the turn 4 gravel when a gust of wind caught him out, and furthermore twice being let through by team-mate Sergio Perez.

Verstappen was clearly upset over the team radio during the race as he suffered with his DRS trying to pass Mercedes’ George Russell.

Verstappen getting fed up with reliability problems

“This tells us two things,” Brundle said. “He’s rather fed up with a catalogue of reliability issues as the team have taken time to finesse and get their new car up to full speed, and down to the weight limit.

“Secondly his temper still has a relatively short fuse, as we saw for example in the brake testing of Hamilton in Saudi Arabia last year, which he has otherwise learned to control well in his quest for victories and a first world championship,” he added.

Red Bull applied team orders as they asked Sergio Perez to let Verstappen through, as they were on different strategies.

Brundle is not convinced, he said: “Perez had pitted his Red Bull on lap 37 for brand new mediums, and Verstappen did the same six laps later, which of course is approaching 10% of the race distance although I’m not entirely sure that constitutes a ‘different race strategy’ as Perez was informed when he was told to let him through for the victory.”

While clearly disgruntled, Perez complied, and Brundle agrees with the Mexican, especially since the season is still at an early stage.

‘It was race six of a 22-race season,” the Briton pointed out justifying Perez’s feelings. “The team were going to get a 1-2 anyway having dispatched Russell and assuming no safety car interferences or suchlike.

“Perez was leading because he had been fast and had stayed on the road, and at that stage it could easily be considered normal to protect the cars and hold station for a Perez victory.”

However, the 62-year-old admitted he would take the same decision as Red Bull, and explained: “While it doesn’t play out well for the team or either driver, if I was on the Red Bull pit wall I’d have done the same and taken the flak.

“The speed of Leclerc in the Ferrari had been impressive, season-long you’d put your money on Verstappen to take the fight to him most consistently, and as we saw with last year’s championship a seven-point swing between first and second could be critical,” he added.

“Verstappen’s pace has been prodigious too on the new tyres, and while of course I haven’t read either of their contracts, I wouldn’t be at all surprised if both of those documents provide for such a switch.

“But Max owes him one,” Brundle insisted.