Verstappen: A difficult beginning but a good end 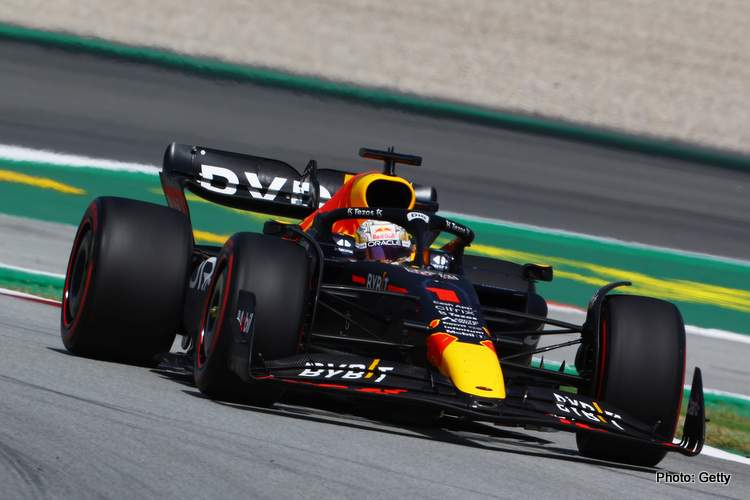 Max Verstappen defied tough circumstances and and early error to win the 2022 Spanish Grand Prix, that had a difficult beginning, but ended in a good way.

Verstappen got caught out by the gusts of wind at Turn 4 on lap 9, the same winds that ambushed Carlos Sainz at the same place two laps earlier.

Verstappen was running in P2 chasing race leader Charles Leclerc at the time of his spin, but survived to rejoin the track in fourth behind Mercedes George Russell where he was stuck, unable to pass due to a moody DRS on his RB18.

However, a great strategy from Red Bull and Charles Leclerc’s DNF, meant the reigning Formula 1 World Champion emerged victorious, his exceptional driving on the day a major factor in his triumph.

Verstappen reflected on a race of mixed fortunes saying: “It’s great to finish the race today alongside Checo with a first and second place, it was a difficult beginning but a good end!

“I went off in turn four, I completely lost the rear and they said on Team radio that it was a big gust of wind. I lost a few positions through that and as soon as I wanted to attack, my DRS stopped working.

“It was upsetting at the time but then I calmed myself down and focussed on the bigger picture,” the Dutchman revealed. “It was a tough battle with George Russell, especially without the DRS, I didn’t want to take too much of a risk as we were fighting for the lead, I had to be patient.

“As for the DRS, I’m not sure why there’s an issue, we’ll look into it and at the end of the day nothing was lost,” he added.

“We are on a good trajectory and we can be proud of that as a Team, but as you can see, some things are fragile and we need to keep on working hard, we have to be on top of everything,” the Red Bull ace insisted.

Sergio Perez: Frustration on the radio in the heat of the moment 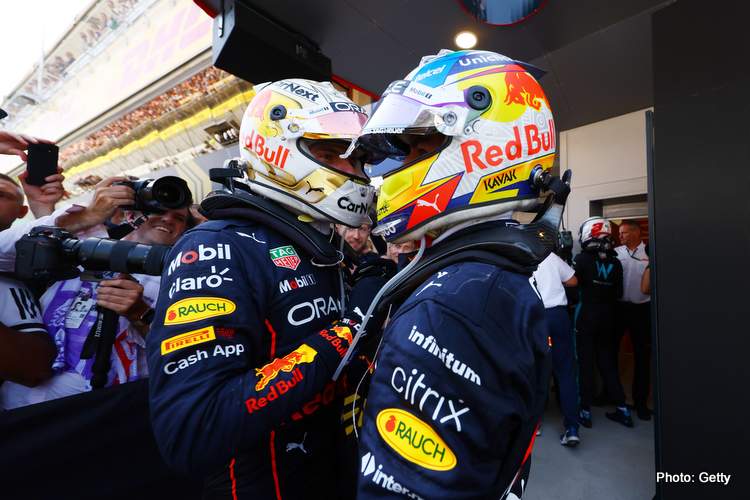 Sergio Perez had a decent race in Barcelona to finish second, but had to adhere to the team’s orders and let Verstappen by, the Mexican venting on the team radio at some point, in the heat of the moment.

Perez said: “It’s a great result, we are leading the Constructors Championship so, although I obviously want to win, I have to be realistic and I am happy with the Team result.

“My frustration on the radio was in the heat of the moment but I need to speak with the Team to understand a few bits from the race,” he revealed. “Sometimes when you are driving you can’t get the full picture, so it is a normal thing to debrief things to understand the race.

“The Team momentum couldn’t be any better here, it is a great Team and we are very united. It wasn’t about Team orders today, what really changed my race was going onto different tyre strategies and that worked better for Max and, at the end of the day, the Team because we managed to both get past George,” the Mexican explained.

“I could have won today but making the two-stop work was difficult and it turned out that the three-stop was the better strategy. I think we had a very strong race today, the race pace and management from us was great today and it was important not to make mistakes.

“Hopefully we continue this momentum on to Monaco and are strong next weekend too,” the two-time race winner concluded.

Red Bull leave Barcelona leading both Championships. They are 26 points ahead of Ferrari in the Constructors’ Standings, while Verstappen leads Leclerc by 6 points in the Drivers’ Standings.

You wait six seasons for a 1-2 and two come along in three races 🏆🏆 #SpanishGP 🇪🇸 pic.twitter.com/2R5K1ieID2