Russell: It was satisfying, we fought for it 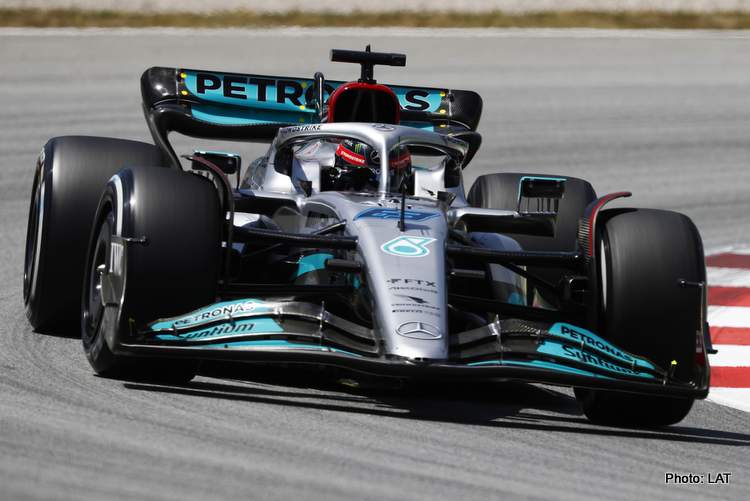 Mercedes driver George Russell said his third place at the 2022 Spanish Grand Prix was a satisfying result, having fought for it tooth and nail.

George Russell continued his run of strong results for Mercedes, securing his second podium of the 2022 Formula 1 season, after a tenacious race to third in Barcelona on Sunday.

Russell had to deal with an overheating W13 during the race, but did a great job to hold off Red Bull’s Max Verstappen, the eventual race winner, the two having a great tussle during the race, as the Briton employed great defense tactics against which the Dutchman was helpless, especially with his faulty DRS.

Russell and Mercedes, however, were helpless against Red Bull bold three-stop-strategy, but in the end the effort put in the race yielded another impressive podium for the British youngster.

Speaking to the media after the race, a jubilant Russell said: “It was satisfying. We fought for it. It was a great battle.

“We turned a corner and we are on the right track now,” he claimed. “We have a base to build upon. Now we found it. We are not there yet. But we are in the mix. We enjoyed today.”

Quite the battle between these two today 👏 Incredible defensive driving from George out there 💪 pic.twitter.com/G9ttGmrZyd

Russell spoke of his race later in Mercedes’ media brief and thanked his team for the hard work they have done, as an updated W13 was brought to Barcelona, which seems to be working.

“Today was super tough,” he said. “I’m just so proud to be standing here on the podium and bring it home for the team.

“The guys have worked so hard, so this result is for everyone back in Brackley and Brixworth who’ve worked tirelessly, thank you!

“I gave it everything I could to hold Max off, they were some enjoyable laps,” he went on. “With the Red Bulls in my mirrors, I was trying to get absolutely everything out of the car to keep them behind.

“It was very difficult last few laps, a real survival race when we knew we had the gap to manage,” the Mercedes driver pointed out, referring to the overheating problem he faced.

“Thanks to all the fans out here in Barcelona – they’ve been amazing all weekend! The support for Formula 1 at the moment is in a great place, so it’s great to be here,” he concluded.

Russell’s latest result means he currently sits fourth in the 2022 F1 Drivers’ Championship, with 74 points and ahead of Ferrari’s Carlos Sainz by nine points. (Additional reporting by Agnes Carlier)