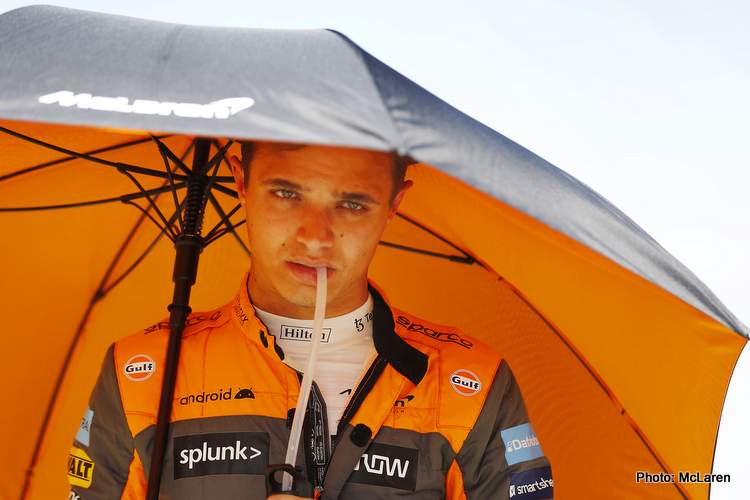 McLaren’s Lando Norris revealed after finishing eighth in the 2022 Spanish Grand Prix that he had been fighting tonsillitis all week and racing had been a huge struggle.

The 22-year-old saw a doctor immediately afterwards for a full health check and was unable to attend his usual media duties.

Television images immediately before the start, with ambient temperatures in the high-30s, had also showed the Briton looking unwell.

“Today was tough. I was feeling really unwell before the race as I’m suffering with tonsillitis, and that, in combination with the high temperatures, made this one of the hardest races I’ve ever done,” he said in a team statement.

“I’ve been a bit on the backfoot this weekend as most of my energy has been spent fighting off this illness.

“I’ve had to miss a lot of engineering sessions, which has compromised my weekend, and I definitely wasn’t as prepared for the Grand Prix as I could have been,” he added, after starting in 11th place.

“With that in mind, I’m really pleased to have come out of the race with decent points for the team. The team have been working really hard to bring performance to the car, so I’m glad we could take something from the weekend.

“We’ll look at the data over the next few days, see if there’s any additional performance we can extract from the car and make sure we’re ready to go for Monaco,” the Briton concluded.

Norris’ teammate Daniel Ricciardo who finished the race in 12th having started from ninth, said: “It wasn’t a good race today.

“I’d love to find something positive, but it was just a struggle from the start. I was slow, and I simply had a lot less grip than everyone else around me.

“With the three stops, we had four chances on different sets of tyres, but we didn’t have the pace on any of them,” the Australian added. “I’m not really sure why, to be honest, so we’ll try to have a look and understand it.

“Hopefully, we can get on top of it as the upgrades we brought were good. We’ve got a short turnaround for Monaco and then we’ll go again and hope for a better one in a week,” the Honey Badger concluded.

Norris is seventh overall in the Drivers’ Championship while Ricciardo sits in 12th, with McLaren fourth in the Constructors’ Standings as Formula 1 heads to Monaco next weekend.(Reporting by Alan Baldwin, Additional reporting by Grandprix247)

Chequered flag at the #SpanishGP. 🏁

A hotly contested race in the sunshine. Points on the board, but we must continue working hard, team. 👊🇪🇸 pic.twitter.com/cOxdrjlP9O