Leclerc: I had no indications, it just broke

Charles Leclerc endured an agonizing 2022 Spanish Grand Prix, as while leading the race, and with no indications, his Ferrari power unit just broke.

Leclerc was enjoying an unchallenging lead during the Spanish Grand Prix on Sunday in Barcelona, as his main rival Max Verstappen spun earlier in the race and was stuck behind a feisty George Russell with no DRS to overtake, but then on lap 27, disaster struck as the power unit on his F1-75 let go. Game over.

As a result, Verstappen ended up winning the race, taking the lead in the Formula 1 Drivers’ Championship from Leclerc by six points.

Leclerc spoke of a sudden failure after the race, and was quoted by Sky Sports F1 saying: “No I don’t know anything more than what happened basically.

“I had no indications before then. It just broke and lost the power completely,” he insisted.

“It is a shame, in those moments I feel like there is nothing more I can do apart from looking at the positives and there are plenty this weekend.

“We will look at this issue and we cannot afford for this to happen many times in the season so we need to find the problem,” the 24-year-old added.

Reliability not a problem for Ferrari until Barcelona

Speaking later in Ferrari’s media briefing, the Monegasque said: “So far this year, the team has been doing an incredible job in terms of reliability.

“Of course this one hurts, because we were in front all weekend and worked really well. I know that things like this can happen sometimes and in moments like these, it is important to look at the positives.

“Our pace was very strong in qualifying and in the race and the feeling in the car was really good,” the Ferrari ace went on. “We made progress in terms of tyre management, which is something that has been a weakness in the past few races.

“So it’s a shame and I’m disappointed that we lost the opportunity to score a lot of points, but the season is still long and we know we have the potential.

“Next up is my home race in Monaco, so I’m really looking forward to it and I hope that it will be a good one,” the winner of four grands prix concluded.

Carlos Sainz: Car was not the same after the spin 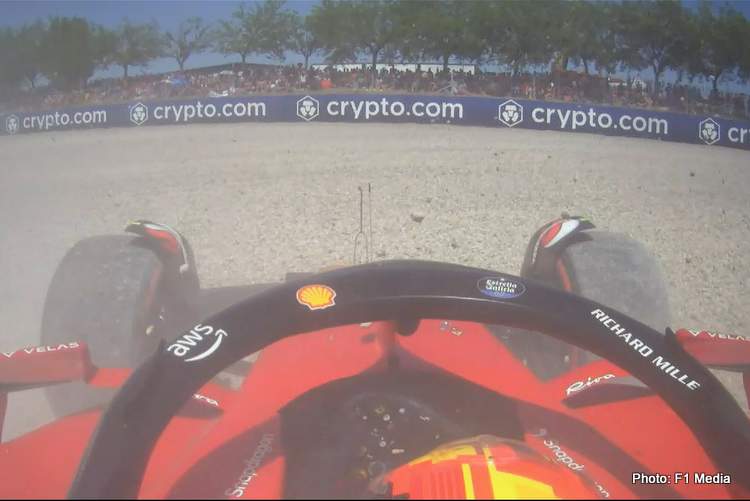 Carlos Sainz had a bad start to his home race from third on the grid, and then fell prey to a gust of wind at Turn 4 on lap 7, after which he could only salvage fourth for the Reds, also benefitting from Lewis Hamilton’s car trouble towards the end of the race.

“Long, tough race for us,” Sainz said after the race. “After the gust of wind and the spin I tried to recover and the car was not the same after that.

“I picked up quite a lot of damage and I was sliding a lot around trying to get back into the podium. But in the end, fourth, not what I wanted, clearly struggling the whole race, but that’s how it goes sometimes,” he added.

Asked if he had a chance for a podium, the Spaniard responded: “I think probably no, just not quite enough pace, but maybe with the issues Lewis had towards the end if we would have been shorter the last stint, could have been maybe possible. Anyway, still good points.”

A tough Sunday for Sainz

Sainz later said in Ferrari’s post race report: “It was a very tough Sunday and very far from what we were hoping for. A gust of wind threw me off in turn 4 and unfortunately, my car was damaged.

“From then on, it was a big struggle for me, as a lack of downforce meant I was sliding around with the tyres pretty much everywhere.

“We gave absolutely everything to recover and managed to get back to P4, which is not too bad given the circumstances, but it’s far from ideal,” he revealed.

Sainz spared a word for his unlucky teammate saying: “A pity for Charles, as he retired when he was leading, but we will work as a team to come back stronger in Monaco.

“The biggest positive from today was the amazing crowd in the grandstands supporting us, so I want to really thank every fan out there for their support. On to the next one,” the 27-year-old concluded. (Additional reporting by Agnes Carlier)