Horner: Max hit the DRS button 50 times on one straight 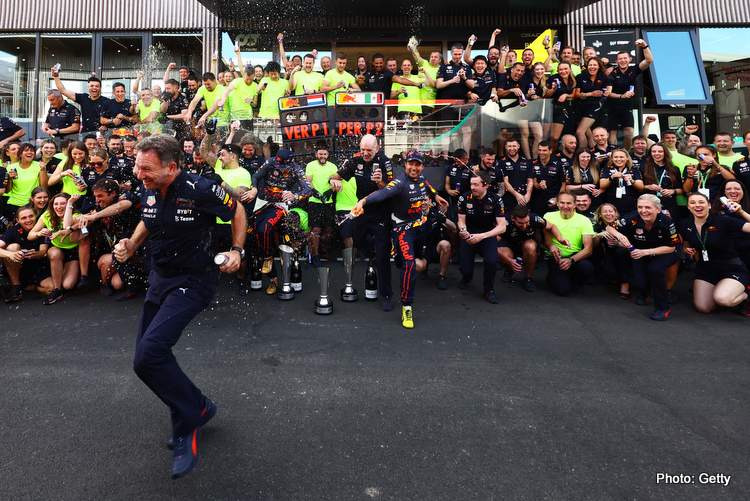 Red Bull boss Christian Horner spoke of Max Verstappen’s frustration with his moody DRS during the 2022 Spanish Grand Prix, at one point hitting the button 50 times on one straight.

It was a tough race for both Red Bull and their ace Max Verstappen at the Circuit de Barcelona-Catalunya, as the a faulty DRS on the #1 RB18 opened at some times, refusing to do so on others.

That made Verstappen’s life very difficult, as he struggled to make an overtake stick on Mercedes’ George Russell, whom he found himself behind after losing his car’s rear at Turn 4 on lap 9 due to a gust of wind.

However, a great strategy from Red Bull made sure the Dutchman won the race in the end after some seriously impressive driving on his part.

Christian Horner spoke of the race with the media and said: “Not by any means that was a race of two halves, nothing really seemed to be working for us in the first half, we had an issue with the DRS on Max’s car and then he had that moment at Turn 4, a gust of tailwind and he did well to get through the gravel and rejoin.”

A lap earlier Carlos Sainz suffered a similar fate, at the exact same spot but spent more time on the gravel and compromised his race, as did Verstappen but he then proceeded to make the fine recovery we saw. Sainz was fourth.

Horner: Mas venting his frustration and there was a little road rage going on 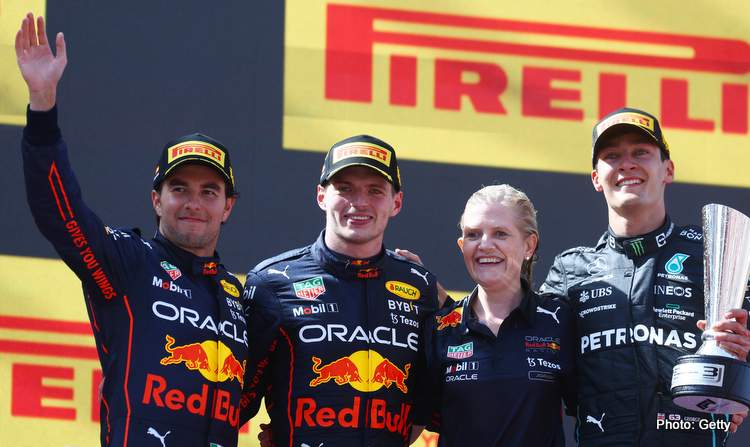 Horner continued: “At the moment we decided because he was stuck behind George and the DRS was intermittently working we felt our best race was converting him to a three-stop. And as it panned out that was the preferred strategy.”

“An angry Max, makes for a very fast Max” mentioned in our 2022 Spanish Grand Prix race report was spot on as Red Bull boss revealed: “He was venting his frustration and there was a little road rage going on at that point which is understandable because he must have hit the button 50 times I think on one straight.”

Horner referring to the intermittent opening of the faulty DRS flap that became a problem a day earlier, during his final Q3 run which might have cost him pole.

Oddly, the simplest and cheapest performance inducing gizmo – the DRS – nearly cost the team dearly; Horner acknowledged: “That is something I think we need to get on top of. The pace in the car today was very strong and it was a shame for Charles, I think it would have been a really interesting fight that second half of the race.”

Horner: I’ve just got to shout out to Checo as well playing the team game 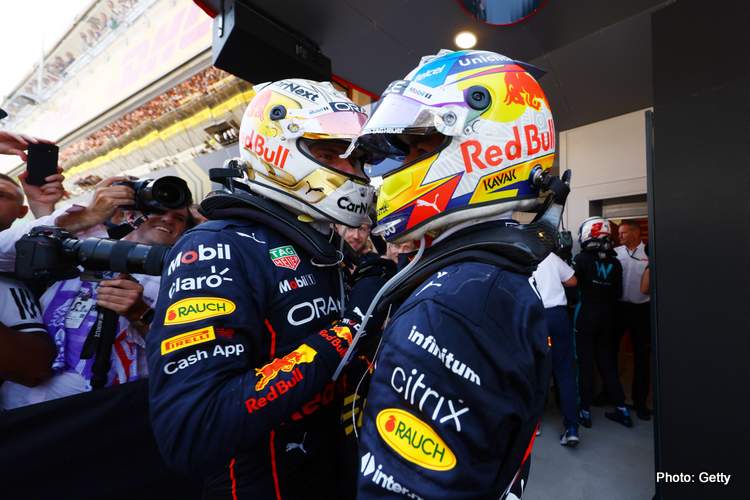 In the sister car Sergio Perez had a strong race, he might’ve even won had Verstappen not been the understandable chosen one for this campaign. The Mexican veteran was always hired to back Max up not take him on.

Horner was appreciative of the ‘team spirit’ shown by Checo on the day: “I’ve just got to shout out to Checo as well playing the team game. They weren’t in the same race, their strategies were different, but they worked together fantastically well.”

While the head has to say, Verstappen maximum points is a must the heart might’ve lobbied to let them race. Oddly some pundits questioned Red Bull’s team order tactics on the day.

Horner explained: “The problem we had was we could see that other cars had temperatures raging, water, oil, brakes, and the last thing you want to risk is a DNF when you’ve got two cars potentially to have a 1-2.

“They were on different strategies so it wasn’t a straight fight, Max had such a tyre advantage and of course Checo’s tyres wouldn’t have made it to the end so that is why he pitted towards the end of the race to get that valuable fastest lap [point] as well.

Horner: Our responsibility is to bring the two cars home with as many points as we can 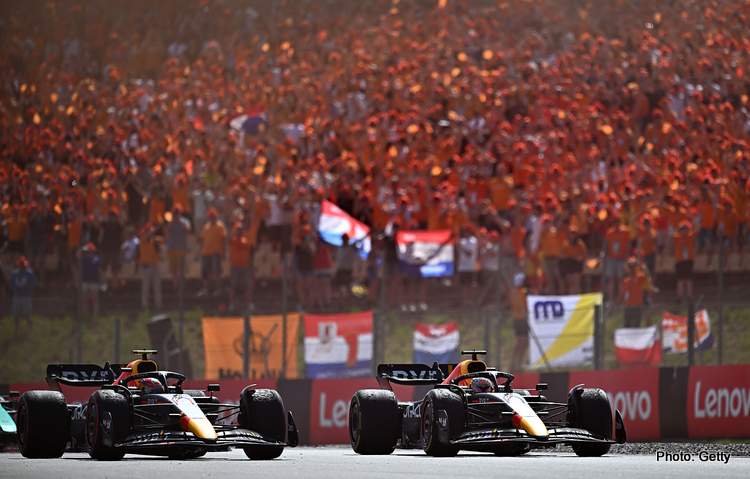 Horner continued: “Of course what Checo couldn’t see at the time which he could see perfectly well now is that he had such a long stint to do on the medium tyre.

“Max had such a tyre advantage from a team perspective there is just no point in taking that risk with an intermittent DRS, with temperatures raging up and down so it was absolutely the right thing to do.

“The DRS was working intermittently there against George. I think from a team point of view the offset was so big between the two, Max at that stage had a tyre delta of about two seconds per lap quicker, it just didn’t make sense to let them fight it out.”

Nevertheless, when Perez was thanked for playing ball and giving Verstappen a free pass to victory, the older driver said over the team radio on his slow down lap: “I am happy for the team but we will speak later.”

Horner may have heard the call from his driver: “We will discuss it and he will see the race plot he will see that he had close to 30 laps to do on that tyres which in the end we needed to pit to make sure we covered Russell.

“In the heat of the moment, you can understand it, if he wasn’t pushing those types of things he isn’t doing his job. Seeing him just after the race he gets it. There is such a bigger picture, as I said the temperatures were raging and beyond all the limits that we’ve ever seen and in this unseasonably hot weather.”

Horner: I’ve said from race one Mercedes are a very strong team 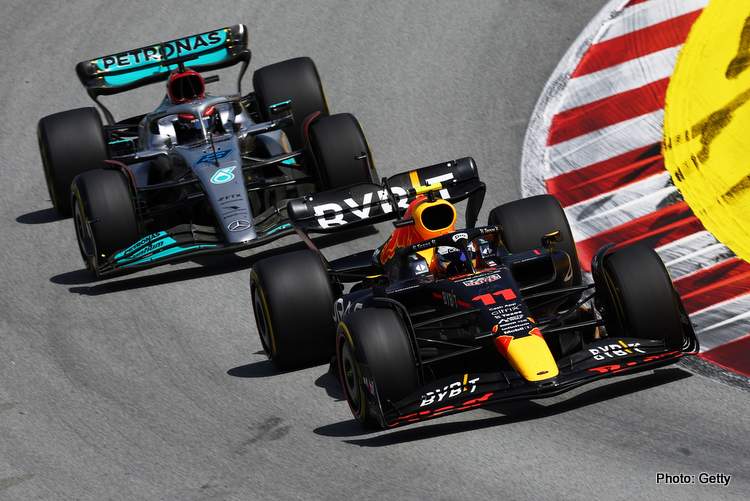 Perhaps the biggest story of the weekend is the resurgence of Mercedes. The reigning F1 coinstructors’ World Champions took a giant step towards the sharp end of proceedings after languishing at the wrong end of the grid during the first five race of the season.

Mercedes are back as third for George Russell and fifth for Lewis Hamilton testifies, despite the seven-time F1 world champion’s first lap contact with the wayward Haas of Kevin Magnussen and the resultant puncture.

With a much more drivable Mercedes W13 (porpoising eliminated) which, if it keeps improving, may soon be at the level of the pacesetters in qualifying and race pace. They are about a tenth or two from making three teams in the mix on race Sundays.

Horner knows a thing or two about a strong race-winning Mercedes team and took note of what he saw on Sunday: “They are getting themselves back into this championship. I’ve said from race one they are a very strong team.

Will Mercedes join Red Bull and Ferrari at the front? 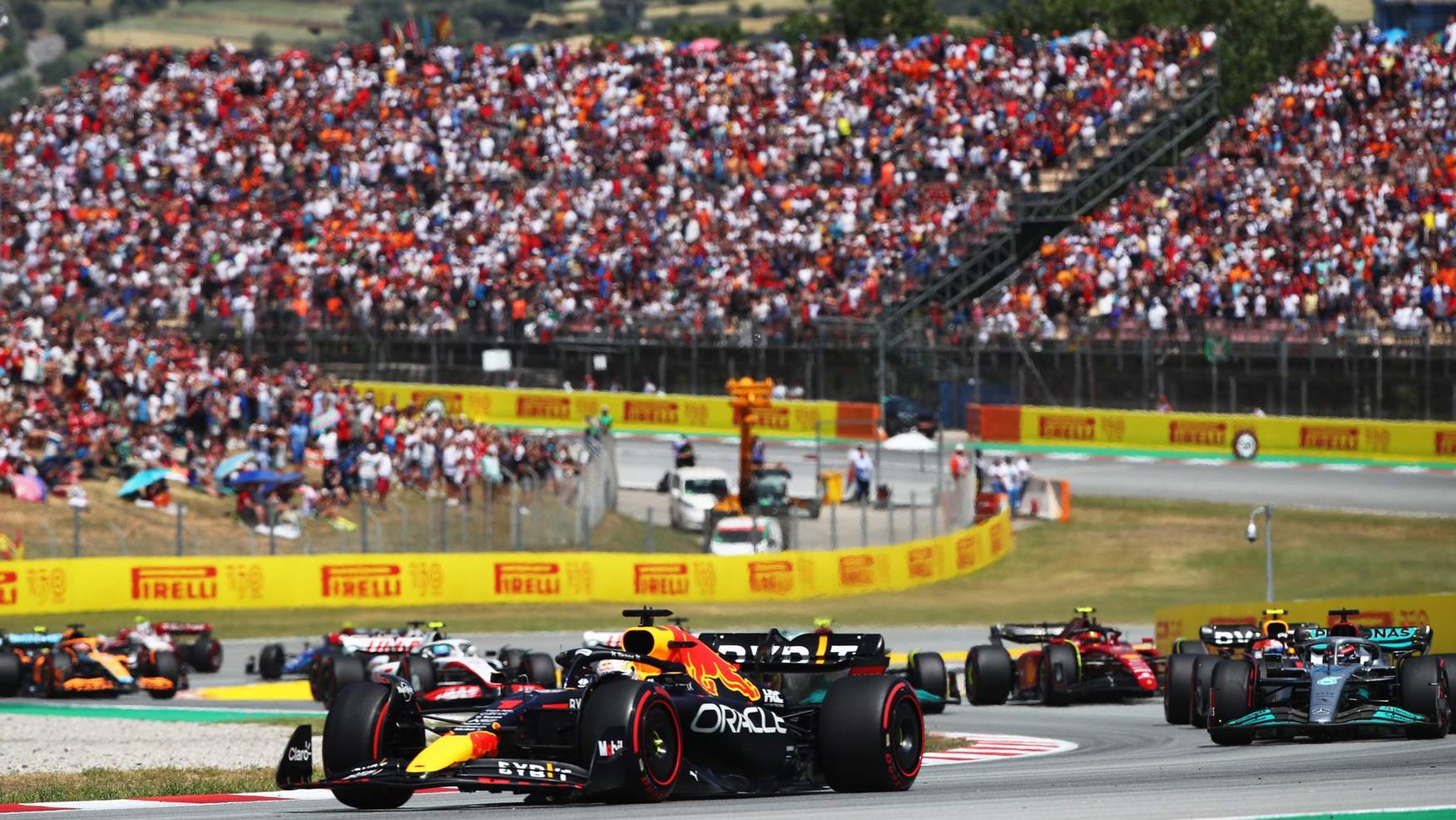 “They’ve got very good strength in depth, you can see they’ve made a very big step this weekend and this has been a positive weekend for them so we don’t underestimate any of our rivals.

“I think Ferrari had a horrible day today but their pace was again very strong this weekend so I think it is only going to get tighter,” predicted Horner.

Nevertheless, the one-two in Spain coupled with Ferrari’s misfortunes, Leclerc in particular, means that Verstappen trailed by 19 points before Spain but now leads the championship standings by six points after six rounds, while Red Bull – trailing in the constructors’ standings by six – now lead by 26.

Horner summed up: “At this stage of the championship, a couple of races back we were 40 points behind, the team has worked really hard to get ourselves back up. It is all the guys and girls behind the scenes and that’s why Jo Fleet our HR director went up to get the constructors’ trophy for the team.

“It is the people who you don’t see that are working so hard back at Milton Keynes under huge pressure. This result is testimony to that hard work,” added Horner. (Additional reporting by Agnes Carlier)