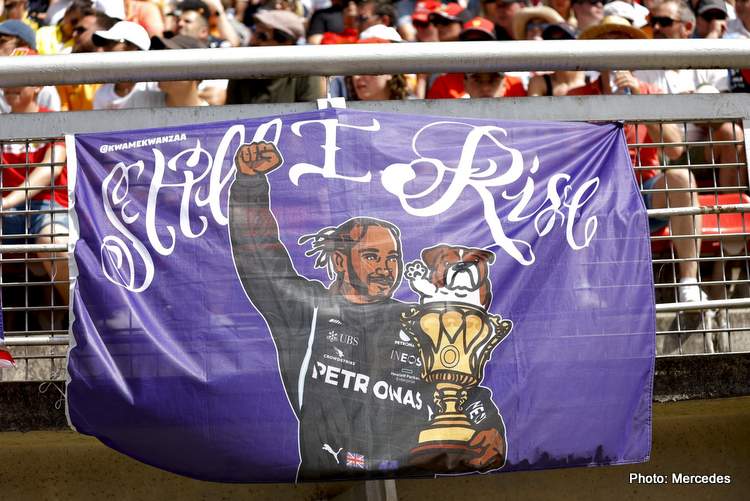 Lewis Hamilton revealed his fifth place at the 2022 Spanish Grand Prix felt like a win, after initially feeling he didn’t even have a chance to score points after colliding with Kevin Magnussen.

Lewis Hamilton revived his spirits, and revised his Formula 1 prospects, with a fighting comeback drive from 19th to fifth in Spain on Sunday.

The seven-time World Champion, whose Mercedes teammate George Russell finished third, said it all brought back memories of old and he felt a return to the top of the podium could be a possibility.

“A race like that is like a win. It actually feels better than a win when you’ve come from so far back and through so much adversity,” he said.

Mercedes, winners of the last eight Constructors’ Titles, have struggled with a bouncing car but performance upgrades have now put a spring in the step of their drivers.

Hamilton had said last month that “we’re obviously not fighting for this championship” but he sounded more upbeat on Sunday.

Hamilton feels he can win again

Asked whether he felt he could win again this season, adding to his record tally of 103, the sport’s most successful driver replied: “Yes, definitely.

“We have made a lot of improvements in the car and the race pace is much better. The car is much nicer in the race. We have some improvements to make in qualifying,” added the 37-year-old.

The Briton is 64 points adrift of Red Bull’s world champion Max Verstappen, the winner on Sunday in a one-two with team mate Sergio Perez, but there are still 16 races to go.

“They experimented with something on George’s car that ultimately ended up being the better way to go in qualifying. Maybe in the next race I’ll take that,” said Hamilton.

Hamilton and Haas driver Kevin Magnussen collided on the opening lap, dropping to the back, and the Briton felt he could otherwise have been fighting the Red Bulls.

“That gives me great hope that at some stage we will be fighting for a win,” said Hamilton.

“I started the race today positive and then had that problem. But to then come back it felt like some of the older races I have done. That for me feels amazing.” (Reporting by Alan Baldwin)