Vettel: I honestly thought we’d do better in qualifying 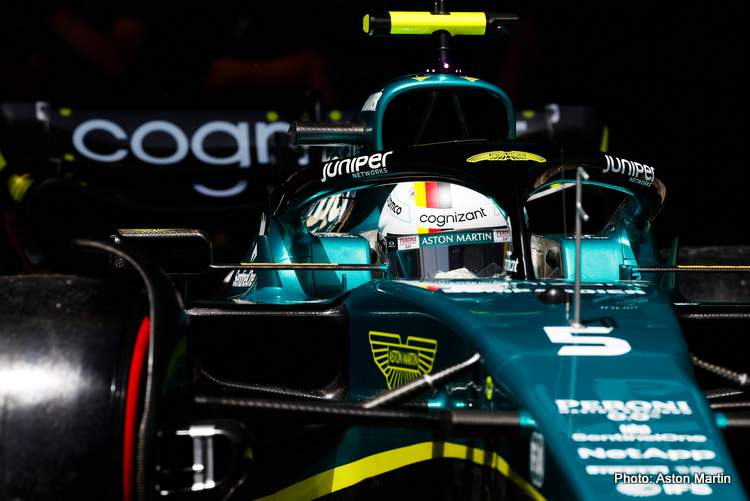 Aston Martin’s Sebastian Vettel lamented being knocked out of qualifying for the 2022 Spanish Grand Prix in Q1, as he though he might do a better.

The four-time Formula 1 World Champion was driving his updated AMR22, or the “Green Bull” as it’s being dubbed now, for its striking resemblance to Red Bull’s RB18, something that has caused controversy in the F1 paddock in Barcelona.

But it seems Aston Martin’s controversial car is no better than its previous iteration, as Vettel qualified a lowly 16th, despite reporting his car felt better. His teammate Lance Stroll qualified 18th.

“We were looking stronger in free practice and I honestly thought we would do better in qualifying,” Vettel said after qualifying.

“This afternoon, however, I struggled with the balance: I had a lot more oversteer and could not really carry speed into the corners without losing the rear,” he revealed.

“Still, the team has done an incredible job to bring two all-new cars to this race – that was a huge effort,” the German added. “The reward of all that effort is not showing quite yet, but I am sure it will come.

“Tomorrow is a new day and we will be pushing hard. It does not help when you start farther back, but I think we should be able to make up some ground in the race,” the 34-year-old concluded.

Disappointment for Stroll as well

Stroll was no better than his teammate, and reflected on his qualifying in the team’s post-session brief: “It is a disappointing result today.

“I have struggled with the balance of the car all weekend and, when you do not feel comfortable, you cannot set fast laps.

“We know it is early days with this package, though, so we need to make sure that we understand the reasons for today and see how we can improve the set-up moving forward.

“Now, it is about focusing on tomorrow,” Stroll added. ” The conditions are likely to be very hot and the tyres need to be managed, so maybe we can make up ground with a good strategy. We will see.”

Aston Martin team principal Mike Krack echoed his drivers’ sentiments of disappointment as he gave his thoughts in qualifying in Barcelona on Saturday.

Krack said: “Clearly, we are disappointed with today’s qualifying performance, having successfully got one of our cars through to Q3 in both of the last two Grands Prix – but, with today’s high temperatures, we had oversteer and traction issues.

“We will now work hard over the next few hours to give ourselves the best possible chance to score points in tomorrow’s race,” he concluded.

An early exit in qualifying for us.