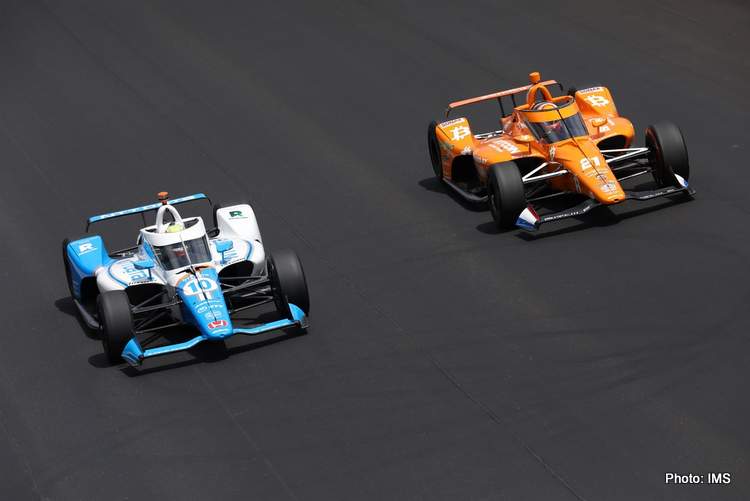 The rain held off long enough for a full round of Indianapolis 500 qualifying on a soupy day that saw blistering speeds — some of the fastest in race history, and fastest in 26 years — and controversy at Andretti Autosport.

Rinus VeeKay put his Chevrolet atop the scoring pylon with a four-lap average speed of 233.655 mph around Indianapolis Motor Speedway. It bumped fellow Chevy driver Pato O’Ward to second at 233.037 as the two budding IndyCar stars were the first two drivers to qualify for the May 29 race.

Arie Luyendyk set the four-lap qualifying record in 1996 at 236.986, and VeeKay’s average was third fastest of all time behind Luyendyk and Scott Brayton’s mark of 233.718. O’Ward’s average was fifth fastest in history, with Tony Stewart fourth in 1996.

Jimmie Johnson qualified for his first Indy 500 and once again showed incredible speed. In an early Saturday morning practice, Johnson turned a lap at 233.961 mph — 14th fastest in track history. The seven-time NASCAR champion has steadily become a legitimate contender to win the Indy 500, which would be his fifth victory on the Indianapolis oval; Johnson won four times in NASCAR.

“There were some quiet moments I had before I rolled off, I was able to look around and really take in the moment,” said Johnson, “and what a special moment it was, I am just so happy to here. Things are looking good for now.”

Saturday schedule moved up due to the weather

Everyone seems pretty fast at Indy, where Saturday’s schedule was moved up because weather forecasts called for a potential washout. Wind gusts of 41 mph on “Fast Friday” a day earlier made for treacherous conditions, and IndyCar worried rain would ruin Saturday, the first day of qualifying.

The schedule adjustment created a seven-hour window for 33 drivers to complete a four-lap qualifying run. If all 33 failed to get it done Saturday, the entire session would have been washed out. But the weather held up for 2 1/2 hours and all 33 cars were credited with a run during that window that could be interrupted by rain.

Positions 13 through 33 were due to be set on Saturday, and a shootout on Sunday will determine the pole.

Not long after Johnson’s morning run, his Chip Ganassi Racing teammate Scott Dixon turned the 13th fastest lap in history at 234.093, and Ed Carpenter closed the session as the leader at 234.410 mph — the fastest lap in Indy 500 practice since Luyendyk set the track record of 237.498 mph in 1996. Carpenter’s lap was eighth fastest of all time.

Andretti Autosport got off to a rough start. Marco Andretti had to abort his qualifying run and angrily accused two-time winner Takuma Sato of ruining his attempt because Sato failed to get off the track following his run moments earlier.

“That was a nightmare. A nightmare! We’re gonna have to re-run!” the third-generation racer screamed on his radio.

The team then petitioned IndyCar to throw out Andretti’s attempt and give him a clean run.

“I’m on the brakes on my warmup lap! I don’t think it’s very fair, it should never happen,” Andretti fumed. “I’m pretty bummed. You should never have to avoid running into another car on a qualifying lap.”

Sato said he was never informed Andretti was on track and when he saw him in his mirrors, he decided to stay put in his line rather than potentially move inadvertently into Andretti’s way.

But as the team was lobbying IndyCar, owner Michael Andretti was leaning palms down on the pit wall incredulous as Colton Herta’s engine seemed to fail during Herta’s run. Winner on the road course just one week ago, Herta was making his qualifying attempt when his Honda engine suddenly shut off.

He aborted his run and returned to the pits, and later confirmed his engine would be changed.

Then 2016 winner Alexander Rossi didn’t crack the top-12 during his run and needs another shot to advance into Sunday’s competition for the pole.

“We added downforce,” said Rossi, who called the decision “horrible.”

The clip in his voice echoed all of Andretti, which took little comfort when IndyCar disqualified Sato for interfering in Marco Andretti’s run. His petition to have his Sato-ruined run thrown out was not granted.