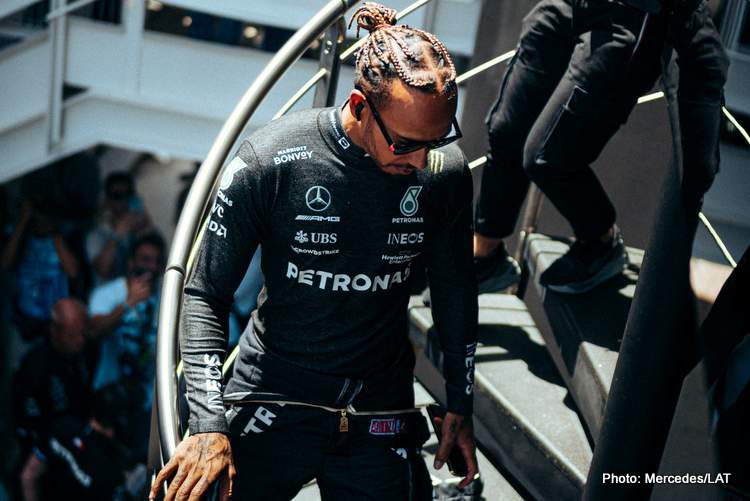 Lewis Hamilton is still not satisfied with his own performance after qualifying sixth for the 2022 Spanish Grand Prix in Barcelona, admitting he is still way off the pace.

Misfiring Formula 1 Champions Mercedes hailed another big step forward on Saturday but Lewis Hamilton said he was way off where he should be after lagging team mate George Russell in Spanish Grand Prix qualifying.

The sport’s most successful driver of all time, a seven times champion with 103 career wins, qualified sixth with Russell fourth.

That was the team’s best qualifying performance in six races this season but Hamilton’s former team mate Valtteri Bottas, seventh for Alfa Romeo, was closer to the 37-year-old on the timesheets than the Briton was to Russell.

The pair are 3-3 in qualifying after Saturday’s session but Hamilton has been beaten by Russell, who joined from Williams at the end of last season, four times in five races.

Russell is 23 points clear of Hamilton

“I’m still way off. My team mate’s fourth. So that means the car should be at least third or fourth and I’m in sixth,” Hamilton told reporters.

“I’m still struggling with the car. I don’t know how to get around that, I don’t know what I’m going to do but I will just continue to try and work hard and figure it out.”

Team boss Toto Wolff said Mercedes had taken a “solid step”, in the battle to tame a bouncing car and would now be able to unlock more performance, and Hamilton welcomed that.

“Now I’m just waiting for the engineers and the aerodynamicists to come through with some more bits for us to progress.”

Russell said the car would be better in the race than qualifying.

“I think we know the direction we need to go,” he said. “And we can focus on making the car quicker rather than problem solving.” (Reporting by Alan Baldwin)