Ricciardo: There’s quite a lot to digest 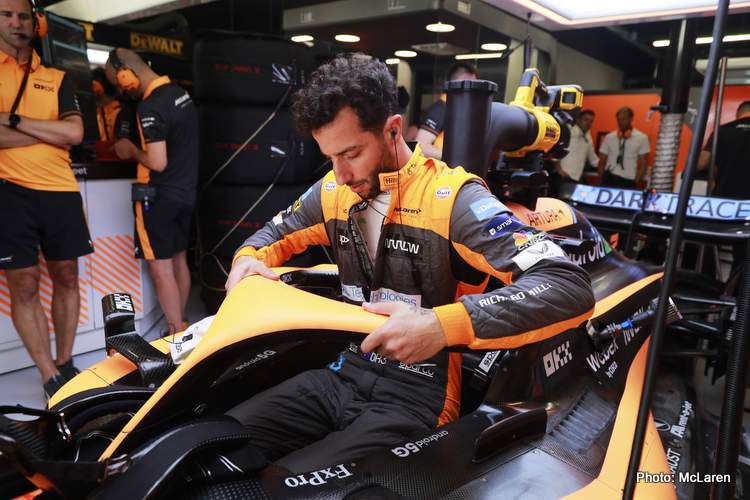 Daniel Ricciardo admitted McLaren had quite a lot to digest after after finishing FP2 for the 2022 Formula 1 Spanish Grand Prix 15th fastest in an upgraded MCL36.

Like many other teams, McLaren had a raft of upgrades bolted to their car on Friday in Barcelona, but it doesn’t seem the team has been able to exploit those upgrades yet.

“There’s quite a lot to digest today,” said Daniel Ricciardo on Friday afternoon. “We tried quite a few different settings for both sessions.

“We clearly aren’t where we want to be on the timesheets but there’s a lot to dive into tonight,” he admitted. “I think we’ll find some things and, let’s say, find the optimal set-up for tomorrow and hopefully that puts us inside the top 10.

“Right now, there’s still a lot to take in so I’m not too sure how much to look into the times today. It was interesting to see the other cars and teams and what they’re doing.

“But we’ll focus on ourselves as for sure everyone today was exploring a few new things on their cars,” the Australian concluded.

Lando Norris showed more speed in the sister car, but a trip over the curbs at Turn 9 during FP2, meant he had to stop his running early due to a damaged floor.

A tricky day for Norris

“It was a tricky day for me,” the Briton said in the team’s press release. “I think there are positives with the new bits on the car, some things were working well, and I think the team are happy with some of the improvements.

“I made a mistake in FP2, which unfortunately cost me the rest of the session as there was a bit of damage to the floor. So, not perfect but nonetheless, I’m still hopeful for tomorrow because the car seems in a decent place,” the one-time pole sitter added.

McLaren’s Executive Racing Director Andrea Stella reflected on Friday’s team activities saying: “It’s been a very busy Friday with a lot of test items to go through here in Spain.

“We introduced our new aerodynamic package and needed to assess that, but also had work to do understanding the tyres in these hot conditions, which are very different to those we experienced here during winter testing.

“Daniel’s sessions were quite clean and we have gathered a lot of information from those. We had a few more issues on Lando’s car. We needed to stop his programme early, after we picked up some damage running over a kerb – but we can repair that overnight.

“There’s a lot of analysis to do this evening – but hopefully we’re in good shape for qualifying and the race,” Stella maintained.

A tough hour to wrap up Friday practice at the #SpanishGP. 🇪🇸