Marko: Do I side with Hamilton? Yes I do 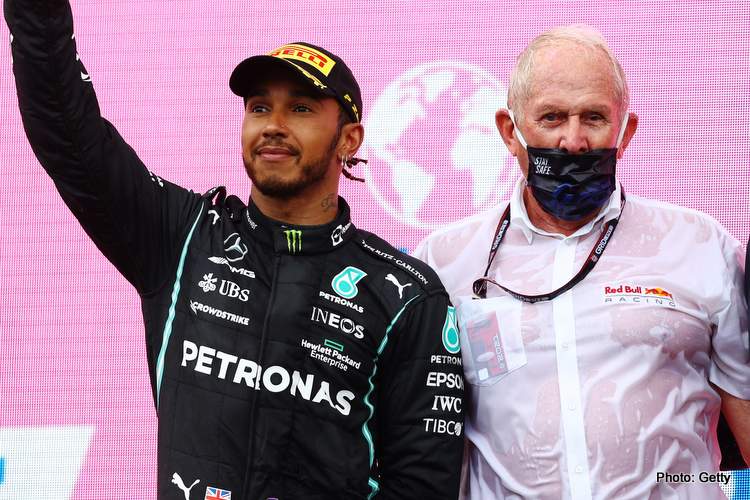 Helmut Marko emerged as an unexpected ally to seven-time Formula 1 Champion Lewis Hamilton in the FIA jewellery saga, as the Austrian revealed he sides with the Briton on this one.

This topic has been in the headlines ever since the FIA announced that they will be enforcing an existing regulation that prevents drivers from wearing jewellery when driving, in addition to wearing compliant underwear.

The latest episode of this saga was in Miami two weeks ago, when the FIA added jewellery and underpants to the scrutineering process, as Lewis Hamilton – after initial defiance – agreed to remove the jewellery he could without surgical intervention, while given exemption until the Monaco Grand Prix to remove the rest, with the risk of hefty fines if he the 37-year-old continues to resist.

FIA president Mohammed Ben Sulayem move to rubbish claims that he is targeting Hamilton in this matter while calling on the Mercedes ace to act as a role model.

However, Red Bull consultant Dr. Helmut Marko has leaped to the defense of Hamilton on this occasion in an interview with RTL.

“I think they have gone too far,” he said. “This should be a personal decision of the drivers.

“I don’t remember how long Hamilton has been in F1, but he has been wearing this jewellery all these years. So why did they suddenly decide to invent this topic?” the 78-year-old questioned.

“I think we have enough other things to worry about,” Marko went on. “We must accept and respect the individuality of each driver.

“Do I side with Hamilton? Yes I do, and this is my honest opinion,” the former racer driver insisted.

Hamilton should get married

Hamilton was asked about the topic recently in a media session for the 2022 Spanish Grand Prix in Barcelona, and was brief in answering: ” I haven’t had any discussions with anybody since the last time I spoke on Sunday at the last race.

“So what I’m aware of is that those who are married are allowed to wear their wedding ring,” he added.

That prompted George Russell to joke with his teammate saying: “You just need to get married then,” to which Hamilton responded: “No, no. You first.”

Pushed to reveal whether he has removed his remaining piercings ahead of the Monaco Grand Prix which is set one week after this weekend’s Spanish race, the winner of 103 grands prix was brief.

“I haven’t, there’s no news update,” he maintained.

In addition to Marko, AlphaTauri driver Pierre Gasly has recently weighed in on the subject, as he also wears religious jewellery while driving, admitting: “I don’t feel comfortable not having with me driving the car.”

Gasly added: “Obviously I have my beliefs, some others have their beliefs; some other guys may want to wear jewellery for different reasons.

“That’s my own feelings and my own view. Lewis has got his own one as well. It’s more having like having an open conversation on what could be done.

“At the end of the day, we’re talking about a very small subject. We’re making a pretty big story and a pretty big fuss about it,” the Frenchman explained.

The winner of one grand prix called for some sort of “compromise” on the subject saying” “I think to me, it’s more like using common sense.

“I think as drivers we all kind of agree on the fact that we would like more communication between what we feel is right and what they [the FIA] think is right, and then trying to find like a compromise,” Gasly concluded.