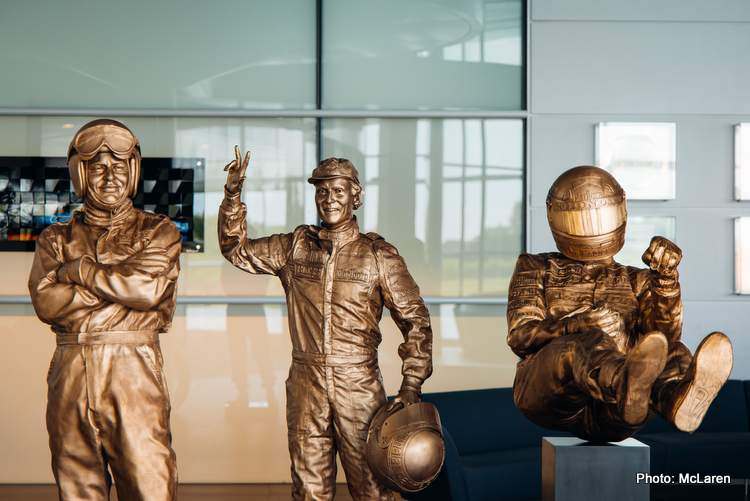 McLaren announced today that they have honoured the great Niki Lauda with a bronze statue of the late triple Formula 1 World Champion at the McLaren Technology center.

Today marks the third anniversary of Niki Lauda’s death who passed away on May 20, 2019, and McLaren have announced on the occasion that they have added a bronze statue of the Austrian great at the McLaren Technology center in Woking.

A tribute to a legend of F1 and of our team. We miss you, Niki. 🧡 pic.twitter.com/L8S6mA0yBi

McLaren said in a team statement: “McLaren Racing today unveiled a new bronze sculpture of Niki Lauda at the McLaren Technology Centre on the third anniversary of his passing.

“The statue is the third in a series, which includes bronze sculptures of the team’s founder Bruce McLaren and three-time F1 world champion Ayrton Senna. This trio of sculptures was commissioned by McLaren’s long-time shareholder Mansour Ojjeh, before he passed away last year.

“Honouring and remembering Niki’s time at McLaren, the sculpture is a snapshot of the moment when he secured his third title in 1984, where he celebrated with a three-fingered salute. The piece also features his famous Parmalat cap and helmet with gloves. The sculpture of Niki will sit on the Boulevard.

“Niki began his Formula 1 career in 1972 and joined Ferrari in 1974, before winning his first two titles with the team in 1975 and 1977. Despite suffering a horrific incident in the 1976 German Grand Prix, he returned to Formula 1 the same year, rightly earning him the status of a hero.

“After a two-year retirement between 1979 and 1981, Niki returned to the championship with McLaren, where he won his third and final title,” the statement concluded.

In honour of Niki Lauda, who passed away three years ago today, we’ve unveiled a bronze statue which will reside at the McLaren Technology Centre.

A three-time world champion, and a true legend of our sport, forever missed but always remembered. 🧡 pic.twitter.com/YIkuAeJwKp