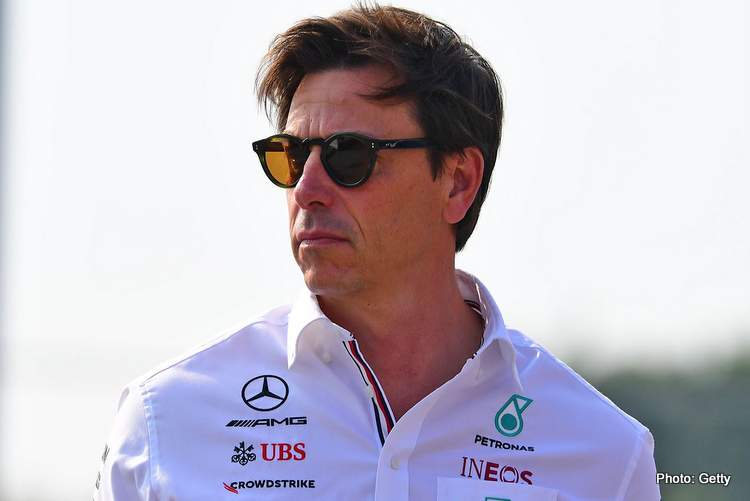 Toto Wolff believes that Max Verstappen beat Lewis Hamilton to the 2021 Formula 1 Title by being overaggressive, saying he was driving with a “crowbar”.

The Title fight between Hamilton and Verstappen in 2021 is well documented, with all the on rack aggression, off track politics, and finally the controversial finale that capped thing up in the Abu Dhabi Grand Prix season finale last December.

Many feel that this matter is already water under the bridge, especially as the 2022 F1 season with the new generation of F1 cars is shaping up to be quite thrilling as well with Charles Leclerc and Ferrari taking on reigning Champion Verstappen.

But every now and then, the 2021 Title fight resurfaces, and this time it was when Toto Wolff was speaking in an interview with OE24.

Asked about Verstappen’s Title hopes in 2022 – winning three of the first five races this year – the Mercedes boss didn’t hold back, saying: “Last year, Max drove a worse car with a crowbar and won the title.

“Now he has the fastest car, so everything is easier for him, the pendulum is swinging in his favor,” he added.

Asked about Mercedes’ own fortunes in 2022, Wolff said: Mixed. We still don’t understand our car.

Wolff refusing to write-off 2022 yet

“At Friday practice in Miami we had a really good day and were among the fastest. On Saturday, everything was suddenly different again. Minimal changes in the setup have a big impact.”

The Austrian however is refusing to write off the season just yet saying: “We’re only in the fifth race, so you can’t write anything off, it could swing back in our direction. And in terms of points, we’re not yet dramatically behind.”

As for the upcoming Spanish Grand Prix this weekend at the Circuit de Barcelona-Catalunya he said: “Barcelona will be interesting for us because we tested there in February with a fast car.

“That’s where we want to continue now. This could be a mini-milestone in that direction. But we have to remain realistic: We’re still only third behind Red Bull and Ferrari,” Wolff warned.

Mercedes have George Russell around Hamilton this year, and the young Briton seems to be coping better with the team’s woeful 2022 Silver Arrow, the W13.

Many pundits have suggested that the guard is changing at Mercedes, but Wolff comments on these claims saying: “I hardly follow it at all.

“And when I pick up one or two comments, I can only smile about them. George is doing a good job, but that’s exactly what we expected of him, which is why he’s at Mercedes.

Asked if Hamilton’s performance may be affected by off-track matters such as the ongoing jewellery saga with the FIA, Wolff responded: “I don’t notice any of that in the team.

“That’s just background noise that’s played out in the press. Lewis and George push each other,” the 50-year-old insisted.