Did the Miami Grand Prix live up to its hype? 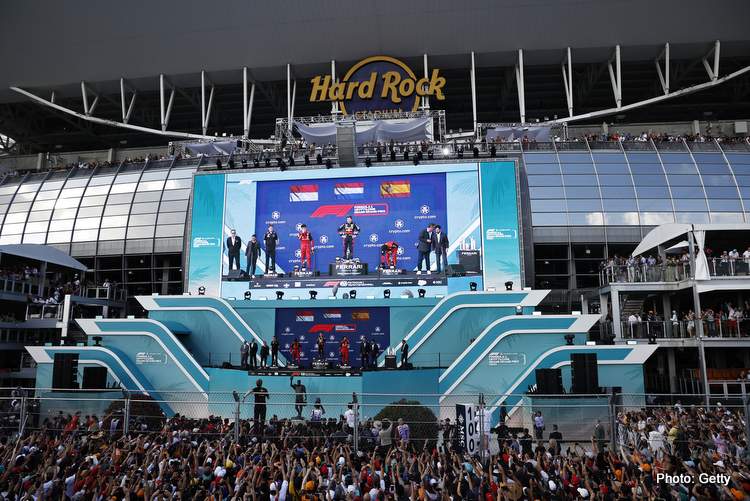 The Miami Grand Prix was hot, from the party scene to the weather, but it faced nearly impossible expectations, however, did the event deliver considering the hype?

The celebrity watching was top level, certainly for a motorsports event. There was Paris Hilton, using a portable fan to cool herself as she danced in front of the McLaren garage on race day. Serena and Venus Williams holding hands as they navigated the pre-race grid in summer dresses. Bad Bunny, the Puerto Rican entertainment icon, making a flashy entrance in an all-pink suit while hanging with Sergio Perez, Red Bull’s Mexican driver.

There were tons of bells and whistles, too, from food halls, art installations, hammocks, chaise lounges to cabanas and a man-made beach. But did Formula 1‘s debut in this sleek, cosmopolitan city measure up as a good event?

That all depends on personal expectations.

The expectations were so high, after all

F1 wants to tap into the rich North American sponsorship market as the series’ popularity has swelled over the last three years. The United States was given two F1 races this season for the first time since 1984 and next year there will be three, with Las Vegas — the glitziest city of them all? — playing host.

Miami received a 10-year contract for its extravaganza at Hard Rock Stadium, where promoters built a 3.36-mile circuit through the parking lot and then went off the charts building the scene around it. Tickets never went on sale to the general public because of early interest and capacity was capped at 85,000 to create a pleasant — and exclusive — customer experience.

The track weaved around the stadium, under an highway overpass and around a fake marina that featured 10 yachts and a mini-Monaco backdrop. There were gondolas to ferry fans across the sprawling circuit, and a beach club that featured musical acts throughout the three-day weekend.

Many at this event were hooked on F1 by the Netflix behind-the-scenes docuseries “Drive To Survive.” Each episode covers an entire storyline — sometimes multiple races — and it’s been credited for exposing the glamorous F1 world to Americans. Netflix and F1 even waited for the series to arrive last week in Miami to announce “DTS” has been renewed for two more seasons.

Allow us to introduce ourselves 😎 Welcome to the #MiamiGP 🏎️🌴

The racing was not top notch

The racing, alas, was just OK, 57 mostly uneventful laps on a track drivers did not like. Fernando Alonso said drivers complained to governing body FIA that “the tarmac is not F1 standard” and promoters twice had to repave portions of the track before Sunday’s race.

The asphalt “almost feels like gravel,” said Max Verstappen, the reigning world champion who won for the third time through the first five races of the season. He also said the chicane was suited for a kart race and not an F1 car.

“In the four laps I did on Friday, I almost knocked myself out because I hit the first curb and your head just bounced from left to right, like at least five, six times, but really bad,” Verstappen said. “It’s so slow and I think our cars look way better if it’s a bit more of a flowing combination.”

The good news is that promoter Tom Garfinkel said before Sunday’s race that organizers would listen to all feedback and make any changes required to improve the event, including track alterations.

He also was cognizant of other areas that fell short — hospitality inside the F1 paddock wasn’t up to series standards on Friday’s opening day; pedestrian bridges across the campus were clogged; shade could be difficult to find — and said it would all be addressed even though the race won’t make a profit in its first year.

“The expenses far exceeded our expectations,” Garfinkel said. “But it was because we were trying to do everything we could to be first class, to be on brand for what Formula 1 is and the kind of event we wanted to deliver.”

The event still had some of that classic F1 backroom drama with the FIA insisting it will enforce its ban on drivers wearing jewelry while competing. Seven-time champion Lewis Hamilton protested by wearing three watches, eight rings and multiple necklaces, but ultimately removed everything but some piercings before getting in his car.

The FIA granted Hamilton a waiver for the next two races so he can make plans to have piercings he can’t take out surgically removed. The Briton must have all his piercings removed by the Monaco Grand Prix on May 29 or risk a fine of $308,000 (250,000 pounds).

Hamilton is having a terrible season by his standards. His spat with FIA has created speculation he will quit F1 and he suggested he might not bend on this issue, saying Friday: “If they stop me, then so be it. We’ve got a spare driver.”

Jewelrygate is the type of off-track drama that drew fans to “DTS” and helped F1 capture a U.S. audience. Hamilton was sixth on Sunday, one spot behind Mercedes teammate George Russell and the fourth time in five races he has finished behind Russell this season.

If something doesn’t change, the next time fans see Hamilton racing in Miami might be the recap on Netflix in Season 5. (Reporting by Jenna Fryer)

The energy of #MiamiGP weekend was out of this world. pic.twitter.com/DjKTr6i2uQ