Sainz: Halfway through the race, my neck became a limitation 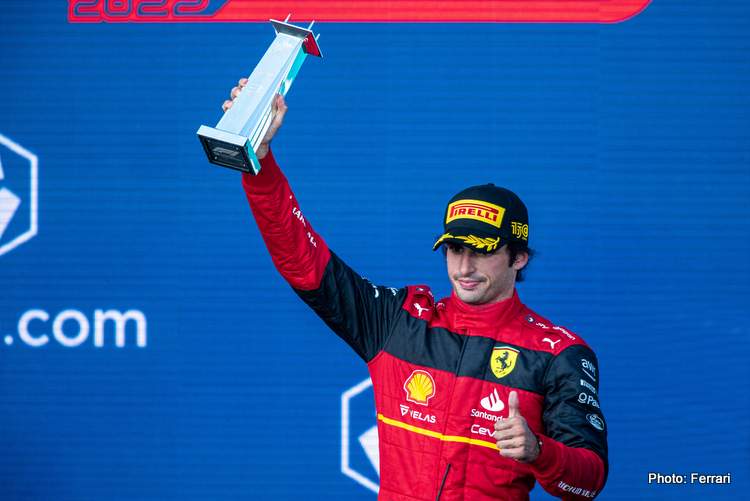 Carlos Sainz did well to recover from his Friday crash to take third in the 2022 Miami Grand Prix, with his sore neck proving to be a limitation in the race.

Sainz was unable to finish his races in Melbourne and Imola, so his podium finish in Miami was a welcome boost for the Spaniard who currently sits fifth in the 2022 Formula 1 Drivers’ Championship on 53 points.

“After a couple of eventful GPs, it’s good to be back on the podium and to have both cars up there for the team,” Sainz said in the post-race ream report.

“In general, it was a solid race but also a very tough one. The neck is still not 100% and half way through the race it became a limitation,” the Ferrari driver pointed out referring to the impact of his Friday crash in practice.

“Defending from Checo (Perez) who was on new Mediums after the restart was also very tough and the slightest mistake would have meant losing P3. I managed to fend him off well and the podium was the reward.

“I think I needed a race like this to reset a bit and build on it for the upcoming races,” Sainz admitted. Up next is my home GP and we’ll make sure we get there in the very best. Miami has been a unique weekend.

“Thanks to all the fans out there for their support!” he concluded.

Sainz made up for Friday’s setback

Sainz’ boss Mattia Binotto reflected on the race in the team’s press release as well, and hailed his driver for recovering from the setback of his crash during Friday’s practice, as well as for his solid defense on Sergio Perez late in the race.

“We can’t be completely happy with today’s race because, although the F1-75 was competitive, our rivals were a few tenths per lap quicker than us,” Binotto said.

“If you consider how many points we are taking home from here, we can’t be too disappointed, given that we are leading both championships, but it’s clear we now need to respond. We are keen to get the job done and there are still a lot of races to go,” the Ferrari boss added.

“I want to congratulate both our drivers for the way they raced today,” Binotto said. “After a splendid pole yesterday, Charles left nothing on the table in his efforts to win while, from qualifying onwards.

“Carlos made up for Friday’s setback and this afternoon, he produced a solid performance, especially in the way he fended off Perez in style in the closing stages.

“Finally, I want to thank the American fans for their enthusiastic welcome and my congratulations to F1 and the Grand Prix organisers for putting on an incredible show, both on and off the track,” the 52-year-old concluded.