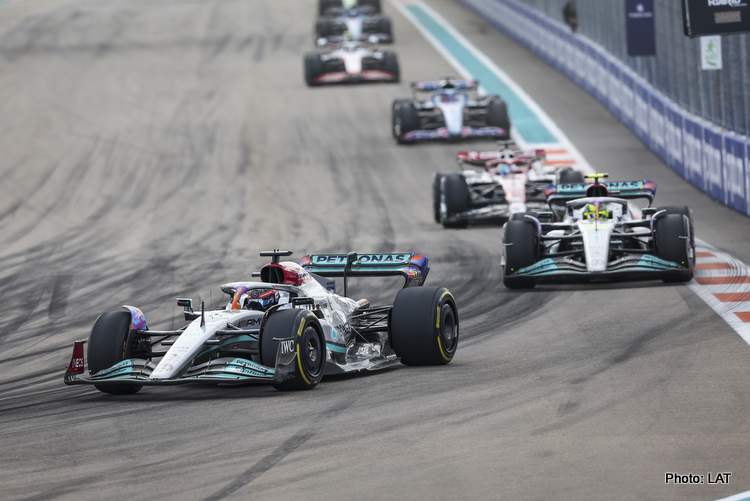 George Russell took an excellent fifth place at the 2022 Miami Grand Prix, after a late race tussle with Lewis Hamilton, as he claimed showing respect is required.

George Russell did an excellent job climbing up from his 12th grid starting position on Sunday to finish behind the Red Bull and Ferraris, in what was another act of damage limitation by the young Briton and Mercedes.

Russell reflected on the race where Hamilton finished sixth behind him, and admitted he was having mixed feelings after the promise the upgraded W13 showed on Friday.

“It’s mixed feelings to be honest because obviously based on where we were yesterday, today was a good result but if you’d told me after Friday we’d finish P5 and P6 and that far behind P1, I’d have been pretty disappointed,” Russell said in Mercedes media brief.

The car has speed that needs to be unlocked

“We have a fast race car in there, we just don’t have the key to unlock this performance,” he added. “And we don’t really understand why that is so there’s work to do.

“Towards the end of the race today, when you’re battling with your teammate, you’ve got to show respect, a bit more room than normal.

“The move was a bit tricky, I went a bit wide, but it’s so dirty offline around this circuit. Obviously it was clear I went off the track and had to do it all over again. I enjoyed it and I think there’s good respect between us.

“But Lewis was unlucky today, when you are on 20 lap old Hard tyres there’s not a lot you can do really. It was brutal race out there – so hot, sweating, my eyes were stinging, I had sweat pouring into my eyes, so I need to find a way to get around that,” the 24-year-old explained.

Russell benefitted from the timing of the Safety Car deployed after Lando Norris crashed and Pierre Gasly crashed, as he was yet to pit for new tyres at that point. Hamilton on the other hand stayed out.

Russell at some point was on the radio asking his team to hold he pit stop in case a Safety Car came along, something he was credited about after the race by the media.

Safety Car timing made Russell look like a genius

“I think we were fortunate,” Russell said of the decision. “You sound like a bit of a genius when things like that happen but that’s the case when you’re on an offset strategy.

“We had P7 covered, there was no point to pit, you may as well stay out there and hope for something like that to happen and we got a bit lucky today.

“But we still didn’t show the pace that we showed on Friday, we showed much more pace than we showed yesterday, but still a long way from where we were on Friday and we need to understand why that is,” the young Mercedes driver admitted.

From P12 to P5 at the 🏁 @GeorgeRussell63‘s run of consecutive top five finishes continues. 💪 pic.twitter.com/SIlTmCrVWY