Norris: Gasly shouldn’t have been drifting to the track 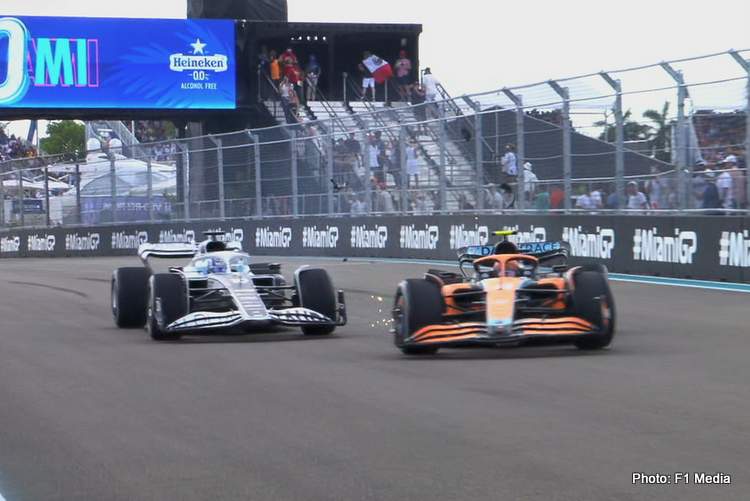 Lando Norris’ clash with Pierre Gasly at the 2022 Miami Grand Prix capped off a tough race for the Briton, who said the Frenchman shouldn’t drift on the track the way he did.

Norris wasn’t having a decent race in Miami, and was running out of the points on lap 41, when Gasly after running wide after he himself had get together with Alpine’s Fernando Alonso.

Attempting to join the track at Turn 7,  the two clashed putting the McLaren driver out of the race on the spot, while Gasly retired a bit after that.

Norris was questioned about the incident after the race and said to the media: “Honestly, the first thing I need to do is speak to him to understand what was happening.

“He obviously went off the track, he had a lot of damage and so on. From my opinion, he just drifted across to the left quite a bit; the track kind of kinking to the right and he wasn’t turning to the right.

“If he was going to box, because I heard someone said he was going to pit or something, then he should be getting out of my way a lot more than what he did,” the Briton added. “So, it’s tough.

“If he was struggling to control the car, it’s life, I’m unlucky. It happens in racing sometimes, but if it wasn’t that bad, he just shouldn’t have been drifting to the track like he was doing.

Norris needs to speak to Gasly

“It looked like he was looking in his right mirror and wasn’t looking where I was on his left. So I’m not sure, I don’t want to blame him. I just need to speak to him and see what he said,” Norris reflected.

Later, in the McLaren’s post race press release, the 22-year-old said: “A tough day. Obviously, it didn’t end anywhere near like we wanted it to.

“I think the collision with Pierre was a bit of a racing incident. I guess I maybe could have left a bit more space, but so could he and we just ended up coming together,” Norris mused.

“So a bit of a shame but it happens and we’ll make sure we bounce back and do better next time,” the one-time polesitter concluded.

McLaren boss, Andreas Seidl, added: “It was a disappointing Sunday for the team. We expected it to be a challenging race, as the track and conditions really did not suit our car – but unfortunately, we lost any opportunity to fight for even minor points after Lando’s collision with Pierre Gasly.”

Norris leaves Miami with no points to show for his efforts and is currently seventh in the 2022 Formula 1 Drivers Championship with 35 points. (Additional reporting by Agnes Carlier)

The papaya fans are behind you. 🧡 We’ll be back in Barca. 💪#MiamiGP 🇺🇸 pic.twitter.com/7RUyO85pBo