Sainz: It’s pointless to dwell on it 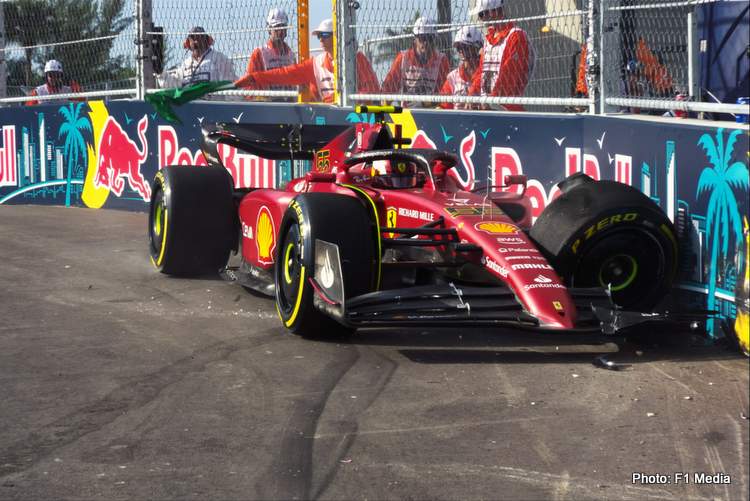 Carlos Sainz claims it would be pointless to dwell on yet another crash, as he binned his Ferrari during FP2 for the 2022 Formula 1 Miami Grand Prix.

Sainz just doesn’t seem to catch a break, as after an error marred race at Imola two weeks ago, as the Spaniard started his Miami weekend crashing his F1-75 at Turn 13 during FP2.

This has put the Ferrari driver under increasing pressure to sort out whatever is troubling him with a car that his teammate Charles Leclerc has won two races with this season, while putting it on pole two times as well.

Sainz didn’t have much to say after running was concluded on Friday in Miami, and said in Ferrari’s press release post session: “Obviously not the best way to start the weekend after a costly snap ended our Friday early.

“Still, I feel the car was competitive and I have confidence in our performance. It’s pointless to dwell on today, so we’ll put our full focus on tomorrow and the race,” he added.

“The extra work for the mechanics is the worst part, so I’ll definitely speak to them and the rest of the team. I look forward to tomorrow,” the 27-year-old concluded.

Leclerc had a good day

Leclerc on the other hand finished FP1 fastest of all, and was second at the end of the second practice session.

“It was a good day,” Leclerc said. “We focused on building up our pace little by little and learned quite a bit about this new track.

“It is challenging and really nice to drive, with my favourite part being the one from turn 11 to turn 16 in the second sector,” he added.

“Things went smoothly on our side and we tested everything we planned to. It looks like everyone is close together, which should make for an exciting weekend.

“The asphalt will spice things up,” the Monegasque said of the special surface on Miami’s track. “There is very high grip on the racing line and very low grip off it, which will make it difficult to overtake.

“It is also rather aggressive on tyres, so it will be important to manage them well throughout the race,” the four-time race winner warned.

Ferrari will be looking to make amends after their disastrous Imola weekend in front of the Tifosi, where Leclerc finished sixth after a late race error, whereas Sainz was spun out of the race by McLaren’s Daniel Ricciardo on lap one, as Red Bull went on the bag a one/two.