Andretti: Sainz will get it right 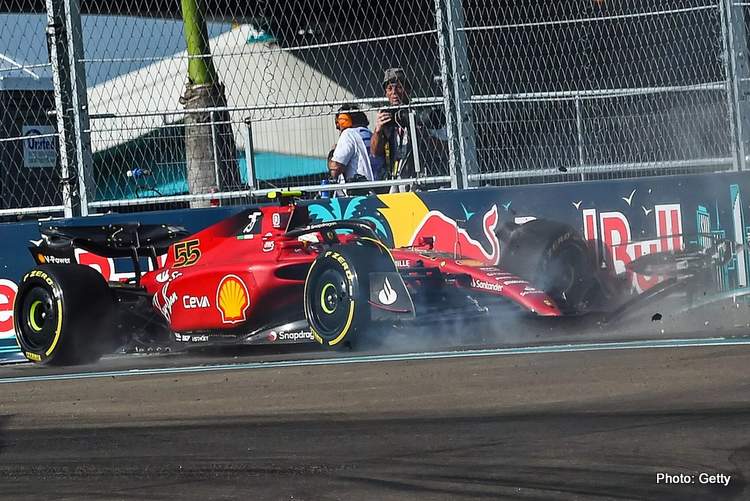 Mario Andretti, the 1978 Formula 1 World Champion, backed Carlos Sainz to bounce back, after the Spaniard’s latest crash at FP2 for the 2022 Miami Grand Prix.

Carlos Sainz’s struggles continued in Miami, and crashed during the second practice session, as he seems helpless to get on top of his F1-75, on a weekend when the Ferrari driver desperately needs a decent result to bounce back from his nightmare he had at Imola a fortnight ago.

Mario Andretti weighed in on Sainz’s troubles after the latter’s practice crash, explaining that he understands his situation, but tipped him to recover.

“Sometimes you just can’t catch a breath,” the American told Sky Sports F1. “You’re trying but you still have to be right on top of it all, and the competition doesn’t get any softer.

“So he’s on it, his team-mate [Charles Leclerc] obviously is always right there. I hate to see it, obviously we all do, but he’ll get it right,” Andretti believed.

Andretti warned that the team should not put extra pressure on their driver – as that would backfire – while hoping at the same time that Sainz keeps pushing, not allowing his mistakes to intimidate him.

“Any team, you can sugar-coat it any way you like. I don’t think they have to put any more pressure on him than he has on himself, quite honestly,” the 82-year-old said.

“The fact that he’s giving ten tenths [of effort] throughout is better than just lagging behind, [in the] midfield and so forth.

“He’s up there, he’s capable, it’s just about maybe just refining certain aspects of it,” Andretti went on. “I don’t like to slow drivers down to the point that they lose that ‘edge’. You can see that he’s capable, so he’ll be alright.”

As for the pressure of driving for Ferrari, something he experienced himself, Andretti said: “Yes you do [feel pressure], but that’s the right kind of pressure, though.

“They expect you to bring results, nothing wrong with that. You expect that of yourself,” he added.

“But if you let that get to you in a negative way, then you’d better rethink a bit,” the veteran of 128 grands prix concluded.