Horner: Imola was just the rebound we needed 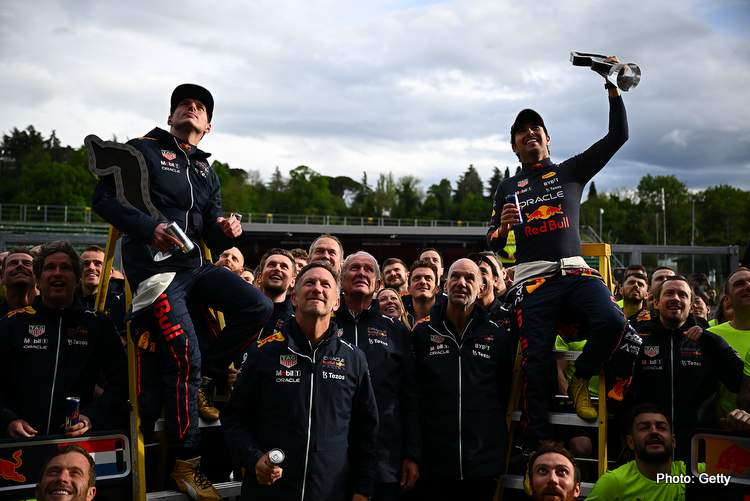 Red Bull boss Christian Horner hailed the result his team delivered over the weekend at Imola, claiming they needed the rebound after their lows of Melbourne.

Max Verstappen’s dominant Imola weekend provided a near-perfect bounce back from misery in Melbourne, with Red Bull confident they are fully firing again in the Formula 1 battle with leaders Ferrari.

World Champion Verstappen, who had to retire in Australia two weeks ago, could not have taken a bigger haul from the Emilia-Romagna Grand Prix with pole and victories in the Saturday sprint and Sunday’s race plus fastest lap.

Mexican team mate Sergio Perez finished third on Saturday and second on Sunday to leave Red Bull only a point short of the maximum 59 and the title battle looking even more two dimensional.

“It was just the rebound we needed,” team boss Christian Horner told reporters after a result that left Verstappen 27 points adrift of Ferrari’s Charles Leclerc, who spun and finished sixth.

Verstappen had been 46 behind after his retirement from second place in Australia due to a fuel system problem.

“We attacked the weekend from the word go and both drivers have been unbelievable. Both Max and Checo (Perez) have driven brilliantly this weekend,” said Horner.

“After the disappointment of Australia to come back with a result like that here at Imola was one of our best ever results.

“You can never say never but I think obviously its demonstrated that we’ve managed to get on top of the issue from Australia.”

The win meant Verstappen and Leclerc, also 24, each have two wins from the first four rounds of a record 23-race season and are the clear contenders standing out from the rest.

The Ferrari driver remains well ahead, however, because Verstappen has also had two retirements due to mechanical issues.

“It’s so early in the championship there’s going to be swings and roundabouts, but obviously the DNFs (non-finishes) have been costly,” said Horner.

“We’ve done it in both championship tables so we’ll take that out of this weekend and try and build on it in Miami at a new circuit in a couple of weeks’ time.

“Ferrari have got a great car and great drivers,” he added. “They’ve been unlucky at this race, but for sure they are going to be super-competitive in two weeks’ time.

“I think it will be like that for the whole season,” Horner predicted.

Leclerc spun while chasing Perez for second, testimony to the Mexican’s key defensive role, while his Spanish team mate Carlos Sainz was hit from behind by McLaren’s Daniel Ricciardo on the opening lap and retired.(Reporting by Alan Baldwin)