Wolff: Sorry, I know this is undrivable 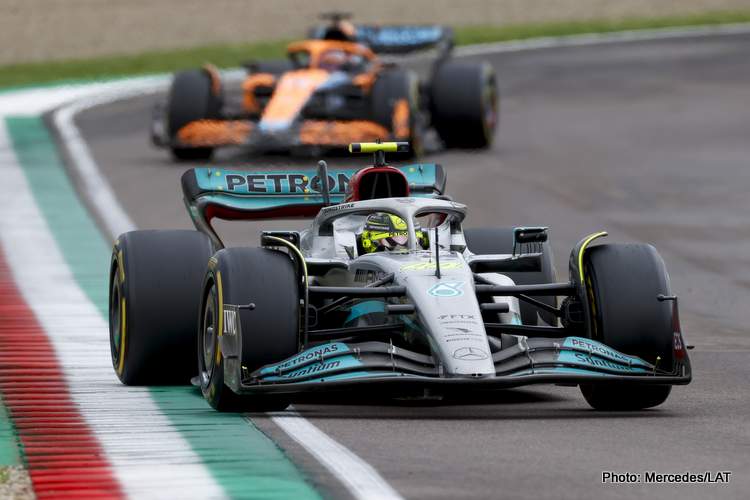 Mercedes boss Toto Wolff was quick to apologize to Lewis Hamilton at the end of the 2022 Emilia Romagna Grand Prix at Imola prix for the awful driving experience he had to endure in the team’s undrivable W13.

It was another nightmare of a race for the seven-time Formula 1 World Champion who finished the grand prix in Imola 14th, after being stuck for most of the race behind the AlphaTauri of Pierre Gasly, helpless, unable to pass.

Wolff was quick to support his driver as he crossed the line saying over the team radio: “Sorry for what you have had to drive today, I know this is undrivable and not what we deserve to score the result. We move from there, but this was a terrible race.”

To which Hamilton responded: “No worries, Toto. Let’s keep working hard,” only for Wolff to respond: “Yeah. We will come out of this.”

Wolff later reflected on his ace’s day in the W13 around Imola, and told the media: “Yeah, really bad. He got squeezed by the Alpine, the other two cars undercut and there’s just no overtaking when you’re in a DRS train.

“I think we are going to look at things for Miami,” he added. “I think we can make a step in the understanding of the car.

“It’s another day, we just really need to understand more and bring development to the car which will fix the bouncing,” Wolff explained.

Hamilton out of the Title fight for sure

Hamilton lamented a weekend he hopes to forget soon, and told the media after the race: “A weekend to forget, that’s for sure.

“I’m out of it, for sure,” he added referencing the Championship fight in 2022. “There’s no question about that, but I’ll still keep working as hard as I can to try and somehow pull it back together somehow.”

George Russell had a better day the his decorated teammate, finishing the race fourth, with his drive hailed by his boss, who was full praise for the young Briton.

“George really drove well considering the car he had underneath,” said Wolff. “He had a car that was setup for the wet, and not for dry and he handled it… a really really good drive.”

Mercedes has many limitations with the car

Russell later reflected on his race and said: “I think we’ve got to be pleased that we are getting the best result possible. Whether we’re getting the most out of the car is a different story.

“Things have fell slightly in our favour in these last four races, so we’ve been fortunate in that regard. But equally, we’ve been unfortunate just because the car hasn’t been quick enough in qualifying,” he reflected.

“That is a motorsport. When the car is quick, things go your way. When it’s not, things don’t go your way.”

The 24-year-old delved into the issues the team were facing with their woeful W13 this season revealing: “We’ve got these overall limitations of the car.

“I think it’s been a trend since Bahrain and we’ve got a little bit slower. We need to find a better compromise for tyre temperatures. Hopefully we find a compromise because we were starting far too low on the grid.

“The car has just been totally outside of the window this weekend. It’s so difficult to get a lap out of the tyres and in the right window, and it’s just being able to put a lap together,” Russell explained.

Hamilton’s form in a Imola a blip

The Mercedes young gun spared a thought to his compatriot driving the #44 Silver Arrow, who endured a humbling experience, as at one point, he was lapped by his rival from 2021 Max Verstappen.

“Lewis has the pace and is incredibly fast but it’s just been tricky for us, as a team, to get things done when the time was needed,” Russell said.

“Lewis has been massively fast, it was probably just a bit of a blip this weekend. But I have no doubt he’s going to come back strongly.

“We all want more and he wants more and nobody is happy with this position,” the two-time podium sitter concluded.