Russell: I’m the new kid within the team, Lewis is captain 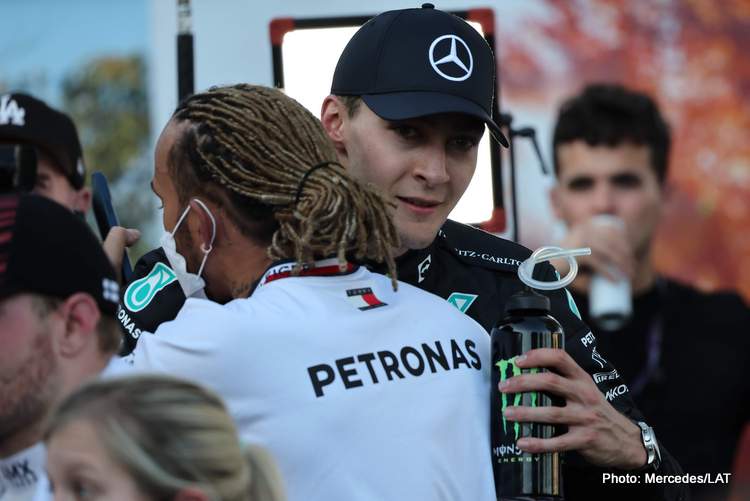 George Russell may be the leading Mercedes driver in this year’s Formula 1 Championship, but he is remaining grounded admitting he is the “new kid” while Lewis Hamilton is “Captain”.

Russell shed light on the dynamic he and his seven-time F1 Champion teammate have in the team, after the younger Briton joined from Williams at the start of 2022, and is adamant that all is well between the pair, Hamilton being the established all-time great while Russell is the upcoming star of the sport.

Speaking to Sky Sports ahead of this weekend’s Emilia-Romagna Grand Prix in Italy, Russell said: “From my side, I’m 24 years old going up against the greatest of all time, if he were to finish ahead of me, obviously I don’t like it but I’m not going to cry and sulk about it.

“I think equally from Lewis’ side, he’s achieved so much – he’s a seven-time world champion, he’s got all the records. I think because we’re at just different stages of our career, there’s no hard feelings either way,” he added.

Russell and Hamilton at different stages in their careers

“You see it sometimes when you’ve got two drivers who are at the same stage of their career… In the back of all drivers’ minds they’re fighting for that top leadership spot, whereas for both of us, there isn’t that because Lewis has been here for so long,” the 24-year-old explained.

Russell is keep his feet on the ground, and not gunning to become team leader from the get go as he feels Hamilton should be the one guiding the team due to his status and experience.

“I’m the new kid within the team and I’m not going to go out there trying to be the leader of the team when I’m going up against the greatest of all time who’s been here for 10 years,” he explained. “He’s like the captain of the team and that’s how it should be.”

The two-time podium-sitter pointed out that the team have more pressing matters to think about, other than intra-team rivalries, as they struggle with their “porpoising”-prone W13 this year.

“At the moment we’ve got this big issue that we’re trying to get on top of,” he said in reference to the 2022 Silver Arrow.

The W13’s problems not limited to bouncing

“Once it’s in a good window, the car is nice to drive and that’s what gives us all confidence,” Russell revealed. “It’s not a disaster but obviously we do have this ‘porpoising’ issue, which is really compromising us a lot of lap time and we’re doing everything we can to get on top of it.

“For sure it’s not just the ‘porpoising’, there are other issues that we need to get on top of,” he admitted. “There’s a lot of talk about the weight of the cars and we’re definitely not the lightest car on the grid, so there’s free lap time just there.

Mercedes are not only struggling with their chassis, as their power unit this year does not seem to be the benchmark in F1, as even their customers seem to lack the straight-line grunt they used to enjoy with a Mercedes PU.

Russell reflected: “We need to keep on improving the engine and try to make that more efficient, obviously you’ve got the stable regulations but there’s more we can be doing to get the most out of the engine, which I think some of the other guys are doing a slightly better job of at the moment.

“There are many different approaches and limitations we have, which I think gives me faith and confidence that if we get on top of it over time, we will find a huge chunk of lap time,” he noted confidently.

“Porpoising” could be a safety concern

Going back to “porpoising”, the former Williams driver believes that not all team knows why they do or don’t suffer from it, and that at some point it should be considered as a safety concern.

“Everybody has it to some degree,” he said. “Some teams have it worse than others. I think we saw in Melbourne that Ferrari were really exploring the limits but it didn’t seem to compromise them that much throughout the corners.

“I think everybody is constantly learning about it, there’s some teams who have no ‘porpoising’ issues at all but they don’t understand why either,” the Briton added.

“I don’t know what the long-term solution is for F1 because it is a bit of a safety concern, you can’t deal with that forever.

“I think with the ground effects cars, you saw it in the 1970s, this issue was there back then as well, so that is just a feature of this,” the Mercedes driver – who has contended 63 grands prix so far – maintained.