Russell: I didn’t believe I was second in Championship 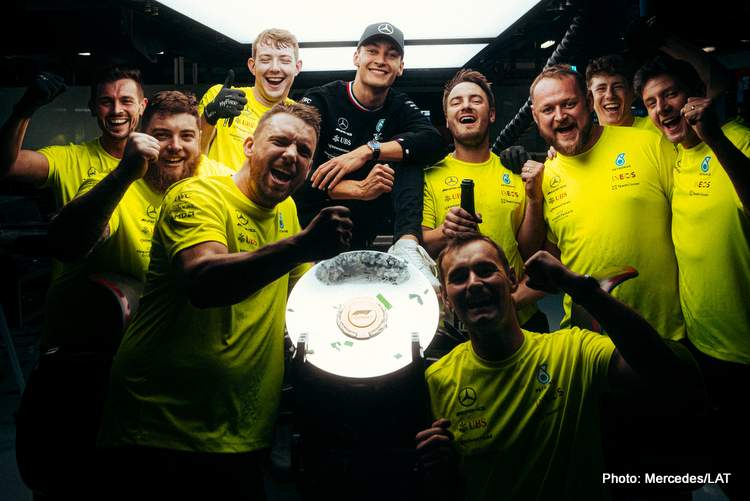 Mercedes ‘George Russell took third at the 2022 Australian Grand Prix, his first podium for the team, and that ultimately put him second in the Formula 1 Championship, which he didn’t believe.

Despite their tough start to the 2022 season, Mercedes have done a great job in damage limitation so far capitalizing on the troubles of others, namely Red Bull.

George Russell and Lewis Hamilton secured two podiums for the team, one apiece, with the team sitting second in the Constructors” Championship, Russell also second , 34 points behind Charles Leclerc in the Drivers’.

Russell shared how he felt when someone told him about his Championship position after his third place in Melbourne last weeked.

“Someone told me and I didn’t believe them,” he told Sky Sports F1. “It’s pretty crazy to think, but this is a championship based on results and not necessarily on pace.

“We know if we want to keep that position, we needed to find more performance in the car…but it’s going to take a lot of time. But, for the time being, let’s keep capitalising,” Russell added.

Nevertheless, the position the World Champions find themselves in is a great achievement considering their poor form.

“We’ve got to be proud about this because we’re sitting P2 in both championships and this weekend we were the fifth-fastest team,” the Mercedes driver insisted.

“We were slower than McLaren and Alpine, Ferrari and Red Bull, yet we’ve come away with P3 and P4, which is pretty mega.”

Mercedes will be methodic in their development

Russell insisted that the his team should remain grounded and go on with the development of their W13 in a rational way, because overdoing it might make them go backwards.

“We’ve got to go about the process analytically, we can’t do anything crazy,” he said. “We want results and performance, but if we do anything too drastic, we’re going to go backwards not forwards.

“We’ve got to trust our team and the process and it’s going to take time, but we know there is so much potential in the car.

“We’re a bit overweight, lacking a bit of downforce and we know why – because of porpoising,” the 24-year-old revealed. “But if we can get on top of those two things there is a lot of lap time there.”

Despite the two-week break between the  Saudi Arabian and Australian races, Mercedes did bring any major updates to their car down under, with Russell also adding that “there’s nothing substantial in the pipeline anytime soon”.

“It’s not going to happen overnight, it’s going to take a number of races,” he admitted. “I think there’ll be little things, there’ll be incremental steps.

“But we recognise that our rivals are going to be doing the same so it may not be clear to the outside world that we’ve made progress because Ferrari and Red Bull are going to be making progress as well,” Russell concluded.