Ricciardo: In a decent place with the car in Melbourne 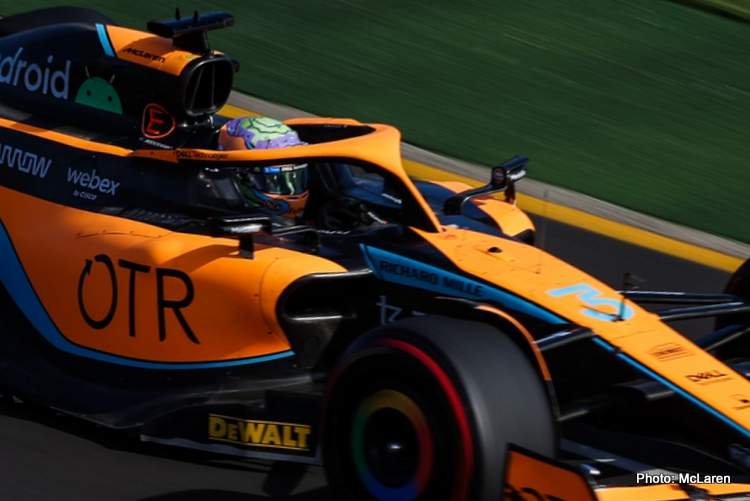 Daniel Ricciardo is relieved to be racing in front of his home fans in Melbourne with an improved McLaren, admitting the MCL36 is in a decent place.

Ricciardo is naturally thrilled to be back racing at the Australian Grand Prix, his home race, after two years of absence, but the woeful form of McLaren since the start of the 2022 Formula 1 campaign was set to ruin his home experience.

However, on Friday practice at Albert Park, the two McLarens finished in the top ten at the end of both the morning and afternoon sessions, which should serve as some sort of relief for the Honey Badger who was eighth and tenth fastest respectively.

Reflecting on his day, Ricciardo said: “It was a good day, just getting back into the groove here in Melbourne, and I enjoyed it.

“The layout has always been fun, but it now has some additional changes to it and for the most part, I like them. Both cars ended in the top ten in both sessions today, so hopefully it’s a sign of things to come for the weekend.

“We’re in a decent place with the car and we’ll just keep at it. We will try to adapt with the track in terms of changes for the rest of the weekend to stay on top of it.

“I have good confidence and hopefully it turns into better days to come,” the Australian concluded.

One of McLaren’s better days

Lando Norris echoed his teammate’s positive sentiments from practice saying: “Today was one of our better days so far this season.

“I think we started off the day well with a good balance and just made further improvements, moving in a decent direction. So far it looks similar to Jeddah, which is a good thing for us, because that was a decent weekend.

“Things are looking reasonably good, there’s still a bit more to improve, so that’s our job going into qualifying tomorrow,” the Briton – who was fifth fastest in FP1 and eighth fastest in FP2 – added.

“Despite several interruptions for red flags, we could work through our programme without problems. Understanding the tyres was a significant part of that: they look interesting this weekend,” he admitted.

“In terms of competitiveness, we seem to have taken a small step forward. We’ll have to work hard tonight to try and consolidate our position with the aim of being in contention for a position in Q3 tomorrow, and hopefully fighting for some points on Sunday,” Stella explained.

Despite the positive day for McLaren, the true state of their improved form will be revealed in Saturday’s qualifying, as the stop watch will have the final word on where the Woking outfit stand.