Gasly: Marko straightforward, doesn’t mean I agree with him 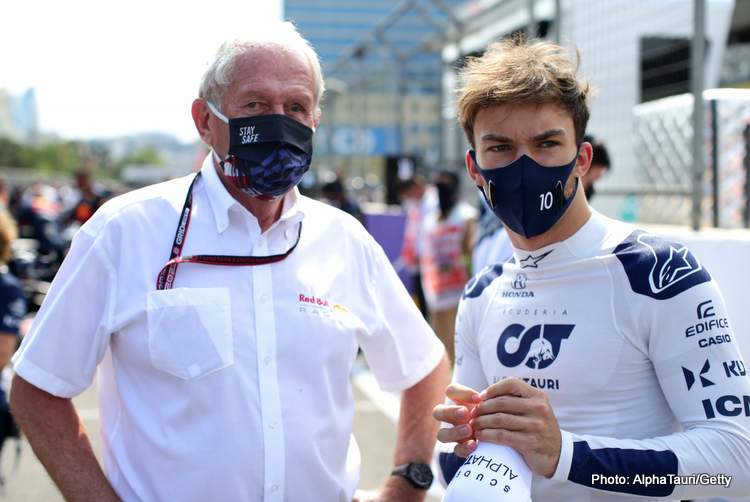 While Pierre Gasly appreciates Helmut Marko’s straightforward style, the Frenchman recently admitted that he does not always agree with what the Red Bull consultant has to say.

Pierre Gasly is one of many Formula 1 drivers that have gone through the Red Bull driver program that is managed by the ruthless Helmut Marko, the Austrian never thinking twice before kicking a driver out, especially if he feels that driver is not delivering the goods.

Gasly was famously promoted from Toro Rosso (now AlphaTauri) to Red Bull in 2019 to replace the Renault-bound Daniel Ricciardo at the time, only to be sent packing in the middle of that season after failing to deliver next to Max Verstappen, and was given a second chance at his old team.

Since then, Gasly has been on great form, even winning a race for AlphaTauri, the 2020 Italian Grand Prix, and was vocal about his aspirations to get another chance at Red Bull, which requires, amongst other factors, getting the nod from Dr. Marko.

There is no filter with Marko

“I get on well with him,” Gasly told RacingNews365.com about his relationship with Marko. “He’s a very straightforward person, which is good, because there is no filter.

“It doesn’t mean I always agree with what he says, but what I really appreciate and respect is that he always says his opinion and what he thinks.

“You don’t waste any time talking with him, because you know exactly where you’re going, and I really appreciate that,” he admitted.

The 26-year-old went on to explain his approach for his racing career in top flight, as he looks forward to having another shot in a top seat, namely Red Bull.

“As a driver, I think the approach and mentality is always to do the best with the car that you have,” he said. “I think it’s important to work really hard. You work all your life for one thing, to be the best version [of yourself] and the best driver you can be.

“It’s important to also get the right tools to show that. My goal is to win races, and to win races you need a car that is capable of winning races,” Gasly added.

“At the moment, my head is into trying to make the best out of the car that I’ve got now, because this is what’s gonna make a difference for what’s gonna happen in the next few years,” the AlphaTauri driver maintained.

Marko: We may lose Gasly, but we don’t want to

Speaking to formel1.de, Marko discussed Gasly’s situation within the Red Bull driver program, admitting there has to be a consideration to the fact that the energy drinks outfit have a contract with Sergio Perez, the Mexican driver being on his second season with the team.

“We have to compare the performances of these two drivers,” Marko said, as it seems that Perez is having a strong start to his 2022 season, even taking pole at the Saudi Arabian Grand Prix.

“With Sergio we still have until the middle of this year [to evaluate his performance], while with Pierre we have a contract until 2023,” he added.

Keeping in mind that Gasly is pushing to have a second chance in a Red Bull car, Marko said: “It’s clear that if we can’t offer Pierre a great opportunity at the end of his contract, we will probably lose him.

“And we don’t want that either,” the 78-year-old admitted.