Haas: Cost from Schumacher’s crash could be $1-Million 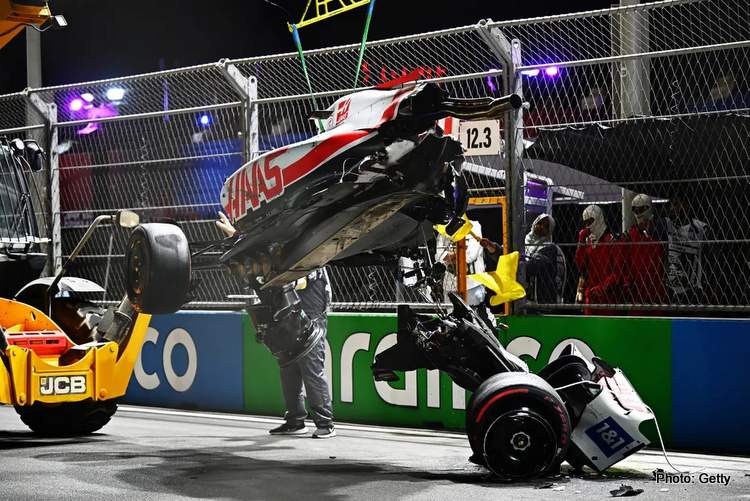 Mick Schumacher walked away from a horrendous crash at the 2022 Formula 1 Saudi Arabian Grand Prix, which Haas estimate with have a $1-Million impact on the team.

That is the claim of Haas team principal Guenther Steiner, who explained to the media about the young German’s huge shunt during qualifying in Jeddah, as the #47 VF22 was shattered even splitting into two pieces when being loaded on the recovery vehicle by the marshals.

The German driver missed Sunday’s race in Jeddah, despite being unhurt in the impact, with the shattered car needing a complete rebuild.

“The chassis in itself doesn’t seem to be broken, the side impact structure … the engine also, I was told from Ferrari, seems to be okay, the battery pack as well, and then all the rest is broken,” Steiner told reporters.

“I think the cost is still pretty high because all the suspension is gone, except the front left. I think there’s still something on there. The rest is just like powder, carbon powder.

“I don’t know money-wise as yet but these cars, between gearbox, the whole bodywork’s gone, radiator … between half a million to a million (dollars) I would say,” added Steiner when asked about the cost of new parts.

Schumacher was back in the track on race day, albeit watching on the sideline, he said: “I’m feeling good – to be able to stand here, not even being sore, just shows the safety and security of these cars.

“I feel fit but car preservation is important if we want to be racing in Melbourne, but we have the pace and that’s all that matters. The goal is still Q3 and points, so we will just have to delay that until Australia now,” he added.

Ferrari-powered Haas, who finished last in 2021 without scoring a point, have made a strong start to the season and are fifth overall with Denmark’s Kevin Magnussen scoring points in Bahrain and Saudi Arabia.

Steiner said Haas would bring upgrades to the car but everything needed to be managed carefully to maximise performance under the budget with 21 races remaining.

The next round is the Australian Grand Prix in Melbourne on April 10.(Reporting by Alan Baldwin, Additional reporting by Grandprix247)