Verstappen: Smart and good racing, not easy but a lot of fun 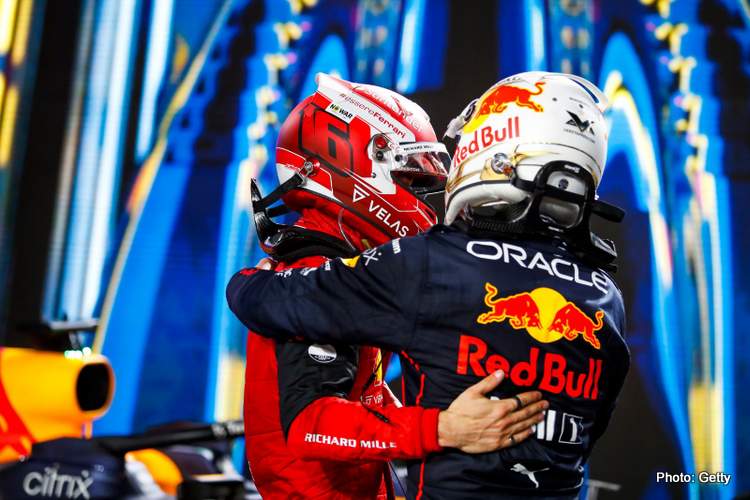 Two races into the Formula 1 World Championship season and defending champion Max Verstappen is going toe-to-toe with Charles Leclerc rather than veteran Lewis Hamilton, the seven-time champion whose crown he took last year.

Verstappen and Leclerc, both 24, rivals since their karting days, lit up centre stage in Jeddah on Sunday when they went wheel-to-wheel before the Red Bull driver made a decisive pass three laps from the end of the Saudi Arabian Grand Prix for his first win of the season and 21st of his career.

“Every battle is different,” Verstappen said. “It’s just smart racing and good racing. It was not easy but a lot of fun.”

Hamilton is F1’s record holder with 103 wins but managed one a solitary point for Mercedes with tenth.

“It’s gutting but we’ll keep working hard and keep fighting, that’s all we can do,” Hamilton said. “Right now we’re not fighting for the top. We’re so far off the guys ahead. It feels like a long, long way away.”

Leclerc was aiming for back-to-back victories after winning the season-opener in Bahrain from pole position last Sunday.

Max versus Charles was intense for everyone! 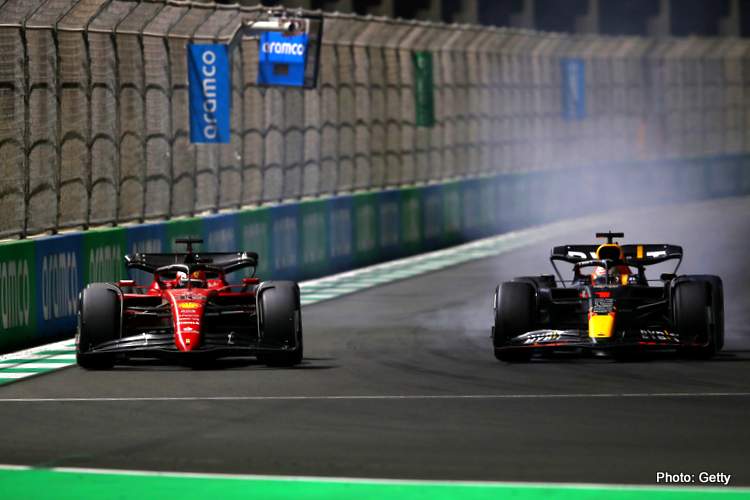 After coming close, Leclerc congratulated his rival on the radio and then gave him a thumbs-up afterwards: “We’ve been pushing like I’ve rarely pushed before, we take risks. Of course, there’s respect. It was hard racing but fair. Every race should be like this. It was fun.”

After a virtual safety car came out, following apparent power failures on Daniel Ricciardo’s McLaren and then Fernando Alonso’s Alpine, Verstappen found himself lurking behind Leclerc with eight laps to go on the sinewy 50-lap street circuit.

Verstappen overtook on the outside at the end of Lap 42. But it was a clever dummy by Leclerc, who dived straight back inside Verstappen on Turn 1 of the next lap.

“Charles played it very smart,” said Verstappen who had another stab on Lap 44, locking his brakes trying a risky overtake on the DRS line, but overtook on Lap 47 with a clean pass.

Leclerc missed out on a fourth career win, as Verstappen edged him by half a second, but remains top of the standings after two races. Leclerc has 45 points, Carlos Sainz Jr. 33 and Verstappen 25. Hamilton is fifth overall with 16.

Sainz’s third place in this race made it another podium double for Ferrari after he was second in Bahrain where Leclerc had brilliantly repelled three attacks from Verstappen, who retired right near the end of that race with teammate Sergio Perez. 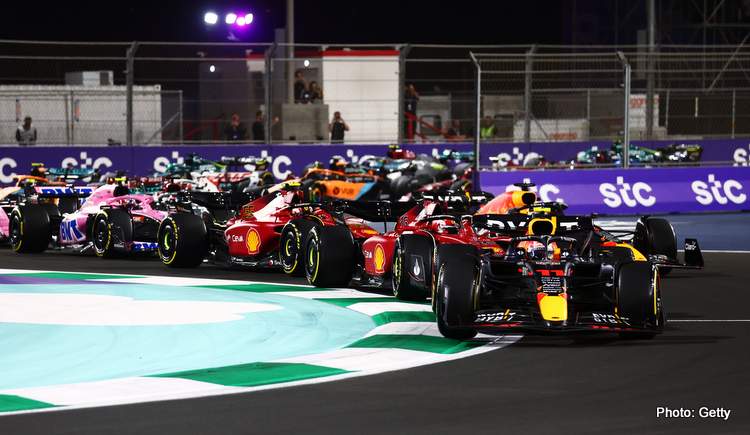 The Mexican bounced back on Saturday with a superb pole position but finished fourth, losing his lead when he pitted for fresh tyres while leading by a couple of seconds from Leclerc. But as he exited the pits the Safety Car was deployed and what was the lead became fourth place where he stayed until the end.

Sainz and Perez were later cleared by stewards for not slowing enough under double yellow flags after Alex Albon and Lance Stroll collided on Lap 49. Albon will serve a three-place grid penalty at the next race.

Hamilton’s teammate George Russell fared better in fifth but Mercedes again looked way off the pace on the Jiddah circuit, about 11 kilometres (seven miles) from Friday’s attack. F1 agreed to race on Saturday after lengthy discussions on Friday night.

Hamilton started from a lowly 15th, and would have been 16th if Mick Schumacher had raced. It was tough for the #44 Mercedes to pass and it took him until Lap 14 to move into 10th.

Perez pitted first on Lap 16, just before a safety car came out one lap later after Williams driver Nicholas Latifi slid right into the side of a wall under no pressure. 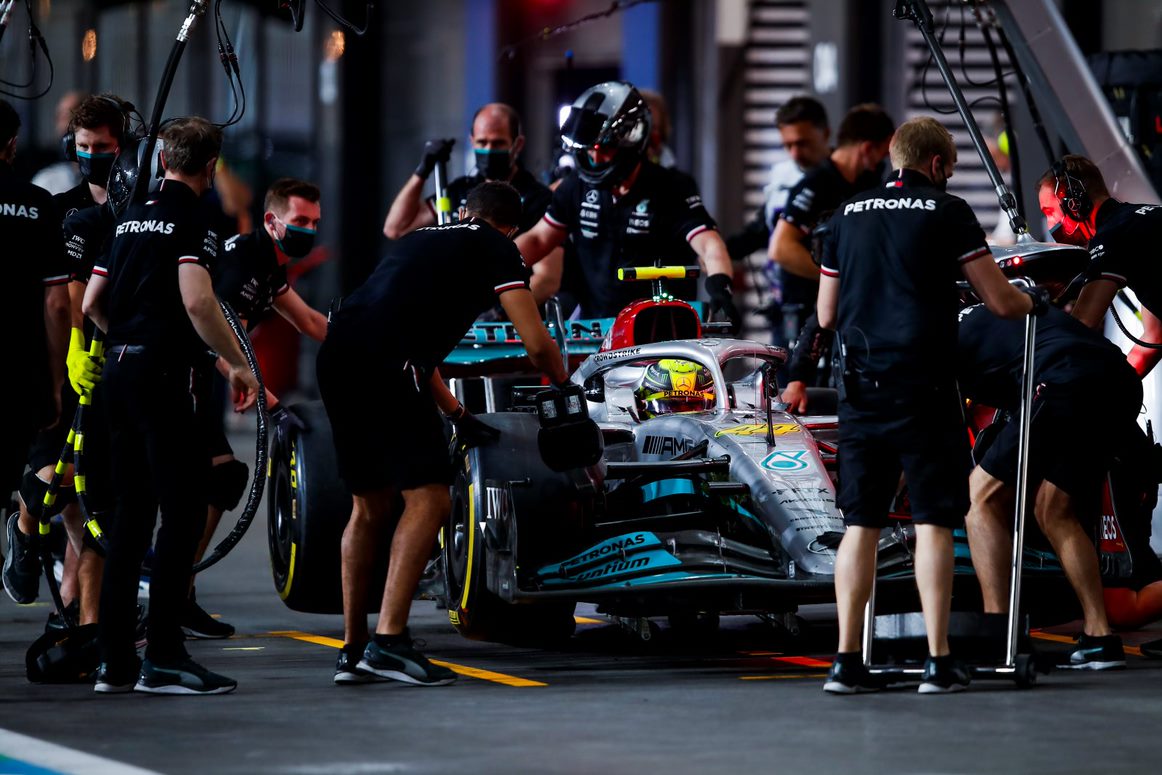 Leclerc held off Verstappen when the race restarted on Lap 21. It was then held up a second time when Ricciardo pulled over. Alonso also crawled to a halt and so did Alfa Romeo’s Valtteri Bottas.

Hamilton pitted again on Lap 41 to ensure his chances of a points finish. He almost collided with Stroll fighting just for 10th, a sign of how badly Mercedes is struggling after winning eight straight constructors’ titles.

Saturday was Hamilton’s worst performance in qualifying since 2017, when he failed to make it out of the first round of qualifying – Q1 – at the Brazilian GP. But that was because of a crash. On speed alone, it was the first time since the British GP in 2009 when driving for McLaren.

F1 heads to Melbourne for the Australian Grand Prix on April 10. (Report by Jerome Pugmire)