Norris: Going to Jeddah with our heads held high 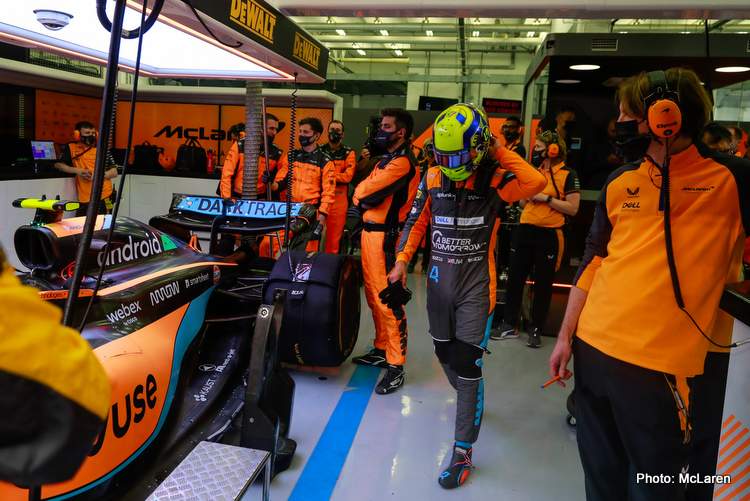 McLaren were woeful at the 2022 Formula 1 season opener in Bahrain, as the team finished out of the points, 14th with Daniel Ricciardo and 15th with Lando Norris, the event practically treated as a testing session rather than a race.

Norris previewed the upcoming Saudi Arabian Grand Prix and said: “I’m excited to be back at the Jeddah Corniche Circuit.

“It’s a cool track and extremely quick for a street circuit. It kept us on our toes last year and it will be great to see how the 2022 cars run here.

“We’re going into this weekend with our heads held high,” the Briton was adamant. “Bahrain was a tough one, but we’ll keep moving forward as a team and take everything we’ve learned from last weekend to make this one the best we can.

“I trust the team both here and back at the factory and I know they’re working day and night to make us stronger for this weekend. We know what we’re capable of achieving so we’ll give it our all and leave nothing on the table in Saudi Arabia,” Norris concluded.

Not an easy start to Ricciardo’s season. Contracting Covid during the pre-season and losing track time in the MCL36 meant that the Aussie went into the Bahrain season opener underprepared and most probably not 100% fit, and all that was made worse by the lack of pace the team suffered.

Ricciardo looked back on the last race while previewing the upcoming one in Jeddah, he said: “Last weekend was disappointing, but on the positive side, we learnt a lot about our car during the course of the race, which we can take into the Grand Prix in Jeddah.

“We’re looking forward to getting back on track at this incredibly fast and flowing circuit,” he added.

“The Bahrain Grand Prix was tough, and not how we wanted to start the season, but we’re putting together our plan to get higher up the grid,” Ricciardo revealed. “We know we might not get there in one weekend, so we’re focused on learning as much as we can at every event.

“There’s a long season ahead of us with a lot of opportunities and that’s exactly the case in Saudi Arabia. We’re going to continue to work as a team and help each other to move forward, that’s why Formula 1 is a team sport.

“We’ll keep at it, keep our heads held high and do everything we can to progress at every weekend,” the Honey Badger concluded.

McLaren have work to do

McLaren team principal, Andreas Seidl, echoed the sentiments of his drivers on the previous race, and admits that they have work to do to get the team’s MCL36 back on track.

“The Bahrain Grand Prix was not how we wanted to start the season,” he said in the team’s race preview. “It’s clear that we have work to do, so we’ll be working hard to bring more performance to the car as quickly as possible.

“The team are analysing our performance from Bahrain so that we can learn and improve, already starting in Jeddah. It’s only the second race with these new cars and the new race weekend format so we must stay focused on all operational aspects.

“We’re looking forward to going racing again in just a couple of days’ time. Jeddah is an exciting track with some great features so it will be interesting to see how the new regulation cars run.

“Let’s get back on track and keep pushing,” Seidl conlcuded.

Lots of 📊 to take into the 🆕 race week. 👊 pic.twitter.com/g4SiAyHtB2