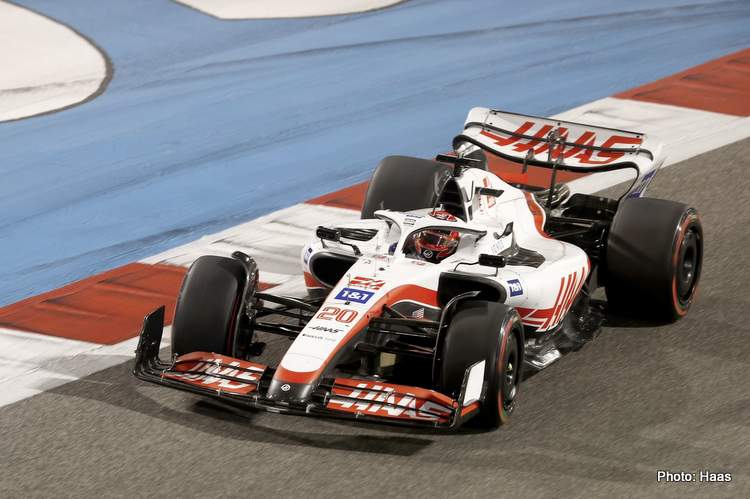 Kevin Magnussen is still riding the highs of a dream comeback weekend at the 2022 Formula 1 Bahrain Grand Prix, the Dane continuing the “craziness” with a fifth place finish.

What a difference a year makes for both Kevin Magnussen and Haas, from being out of F1 for the former to having a sensational comeback, and from being miserable backmarkers for the latter with an undeveloped car in 2021, to top five finishers in the 2022 season-opening-race in Bahrain.

And that fifth place was courtesy of K-Mag, who made the best out of what seems to be a decent VF22, despite not driving it at all up until one week before the first race of the season.

A bit of luck with Red Bull retiring, but Magnussen will take it

“The craziness just continues,” Magnussen said in his team report. “We had a really good race and the car was good all the way through.

“We had a little more degradation than we would’ve hoped for on the first set of tires, but I also got passed a few people that were faster than me on the first lap and I didn’t really know whether to keep them behind or let them go.

“I also locked up a little bit so maybe it wasn’t perfect, but even though we pitted earlier we then extended the second stint on the same tire to get back on plan,” he revealed.

“Then there was a safety car that put everyone on the same tire and then it was just a sprint race to the end, so it was just intense. Obviously, a bit of luck there with the two Red Bull’s but we’ll take that,” Magnussen concluded.

Magnussen’s teammate, Mick Schumacher made up on position by the end of the race, having started 12th, and suffered some bad lack in terms of a first-lap collision with Alpine’s Esteban Ocon, for which the Frenchman was found at fault, and handed a five-second time penalty.

Reflecting on his race Schumacher said: “With all the circumstances that we had with the spin in Turn 6 after contact – I don’t know how much damage that would’ve brought to the car – it didn’t feel amazing to drive afterwards.

“I think that was also represented in the pace we had. Seeing Kevin in P5 means that we have the car to do this, and that I can do the same.

“That also means we’re close to podiums if there’s a crazy weekend, which there usually is in Formula 1, so we should be able to do that,” the German mused.

Team principal Guenther Steiner added on the day: “A very good day for us today, it’s good to be back for the whole team. They’ve done a fantastic job, not just today but for the last two years.

“Everyone kept their head high and just got ready for the moment that we would have a good car.

“When that moment came, everyone did their part and I’m very proud of them, and they can be proud of themselves,” he concluded.

This one will be in our memories for some time 😊