Binotto: A good fight, a good battle, it’s great to be there 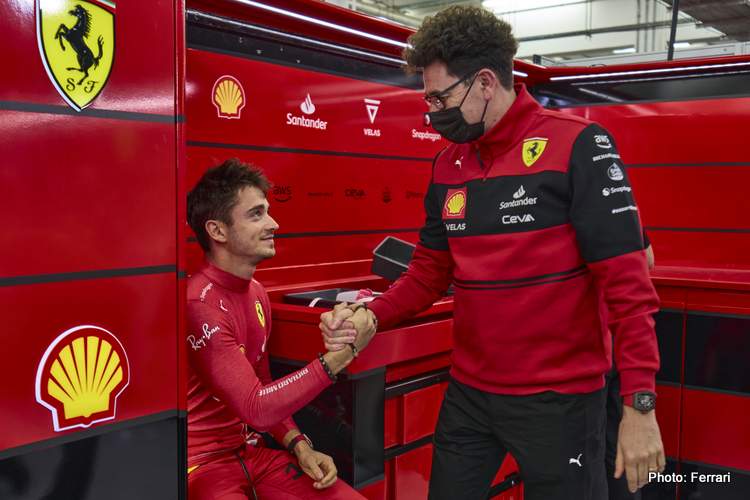 A visibly relieved Ferrari team principal Mattia Binotto first congratulated everyone in the Red pit garage before telling reporters it was great to be back after Charles Leclerc put the success-starved Formula 1 team on pole for the season-opening Bahrain Grand Prix.

It was the Scuderia‘s first pole since Leclerc at the Azerbaijan Grand Prix last June and fuelled hopes of a first victory since 2019 for the sport’s oldest, most successful and glamorous constructor. Giving credence to the “resurgent Ferrari” headlines that were made during the preseason

Ferrari fought back to third overall in the F1 constructors’ standings last season after a 40-year low of sixth in 2020 and look to be in a battle with Red Bull for early season honours after a strong showing in testing.

“It’s great to be back. We know it has been very tough,” Binotto told Sky F1 after qualifying at Sakhir. “It was very tight and it will be very tight for the entire season, hopefully … It’s a good fight, a good battle, it’s great to be there and to enjoy it.”

Ferrari have not won a F1 world championship since 2008 but hopes are rising that this year, the start of a new era with much changed rules, could end the drought.

Now with 10 pole positions, Leclerc was 0.123 seconds faster than Red Bull’s reigning champion Max Verstappen and said it was always just a question of when.

Leclerc: We managed to make a car that is back to where it deserves

“Obviously, the last two years for the team have been extremely difficult after 2019,” said the Monegasque. “We had two very difficult years where I knew it was just a matter of time before we got back to the top because we were working well. But until you actually do it, you always have the doubt.

“Finally, this season, we managed to make a car that is back to where it deserves, which is to at least be in the mix for the top positions,” added Leclerc, who said on Friday he felt he had a shot at pole.

Teammate Carlos Sainz qualified third, ahead of the second Red Bull driven by Mexican Sergio Perez, and had been on provisional pole after the first flying laps in the final session.

“I think expectations were there, we created them but that’s Ferrari. I think everybody is waiting for us,” said Binotto.

“The team is great and it is good to see at least today that we are performing OK. Tomorrow will be another day, I know pretty well, I know that tomorrow can be even tougher…

“But at least the quali is showing that the car is performing well and now the season will be long but we want to be part of it.” (Reporting by Alan Baldwin &Additional Reporting by Agnes Carlier)