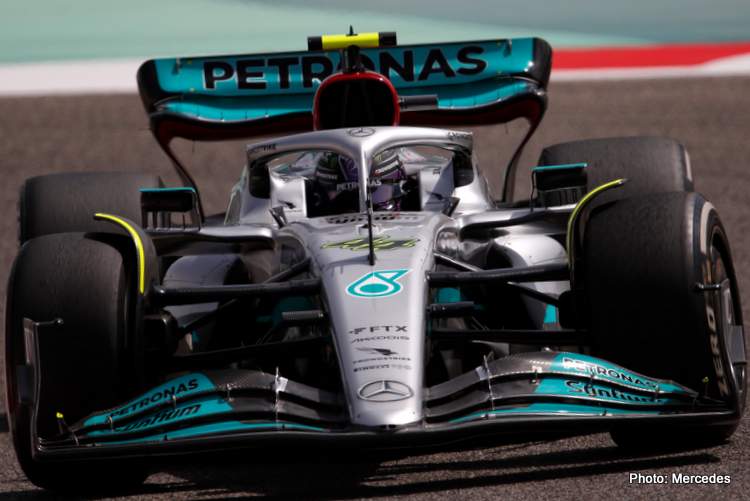 Mattia Binotto gave his view about Mercedes 2022 Formula 1 car’s radical side pods, admitting he has no doubt the W13 is a great car.

The updated silver arrow that broke cover on the first day of the official pre-season test in Bahrain, and sent everyone in the paddock into a frenzy because of the ultra-slim side pods it debuted, their legality becoming the main talking point.

Ferrari’s team principal Mattia Binotto acknowledges his rival team’s creativity, and does not feel anything should be illegal about the W13’s concept.

“Looking at the Mercedes car, no doubt it is a great car,” he told the media in Bahrain. “That should not be a surprise to us. The concept is quite different to ours, quite interesting with the cooling layout, and the side-pods look quite interesting.

“On the legality overall, I don’t think that we can argue,” Binotto admitted. “As Toto [Wolff] said, it has gone through a process and the FIA is the one responsible for policing it and making sure it’s fully legal.

Binotto surprised if Mercedes did something illegal

“I would be surprised if Mercedes is doing something illegal as well, so that’s not the point,” the Ferrari boss reflected.

Binotto may have no problems with the side pod design on the 2022 Mercedes, but he seems to have an issue with the side mirror design the Brackley squad came up with, something that may require future discussions within the sport.

“I think, on the mirrors, I’m [somewhat] surprised… I would say that’s something we are not expecting,” he said.

“I think that’s something that, for the future, needs to be addressed. Already, in the past, we always argued that the mirrors should not have any aero purpose. It should be there just to look behind.

“The way that they treated or designed their car, certainly there is a significant aero purpose in the mirrors itself,” Binotto pointed out.

“Some things we need to discuss for the future, because the risk is that all the teams will start designing mirrors that look like spaceships.

“I don’t think that’s what we are looking for, as Formula 1,” he went on. “So again, I’m not arguing with the idea. They found a solution that, for them, is interesting.

“But I think that, in the spirit of what we intend to do, certainly for the future, some things [will] need to be discussed,” the Swiss-born Italian maintained.

Hours from the reveal of the upgraded Mercedes is Bahrain, Red Bull boss Christian Horner has expressed his displeasure with the Mercedes approach claiming the they “went a step too far” and that the way the mirrors were mounted on the W13 “does not correspond to the spirit of the regulations”, but that stance did not last for long.

Later Red Bull went our of their way to retract what Horner said with a statement that said: “Christian Horner has not given any interviews regarding Mercedes’ car. Any quotes being attributed to him this morning are incorrect.”

It will be interesting to see how the dynamic between last year’s rivals develops this season, and with Ferrari seemingly having a good enough car to be contenders, things should be extra juicy when and if three start playing the politics games instead of two.

One thing for sure, and interesting season awaits us.