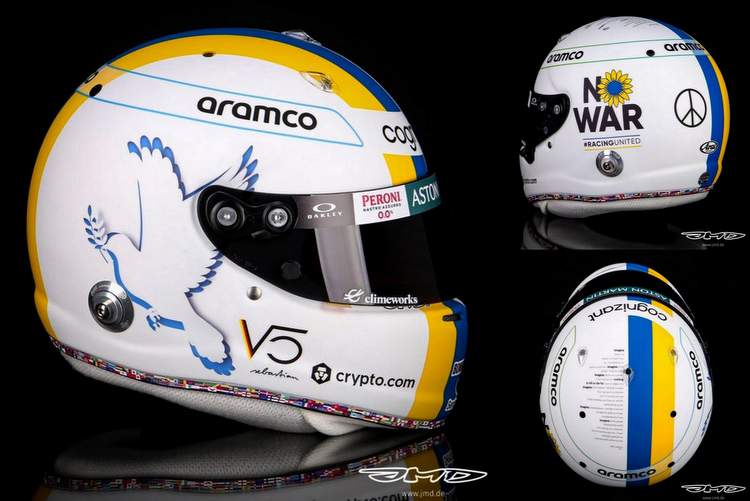 Four-times Formula 1 champion Sebastian Vettel wore a special helmet to express solidarity with Ukraine following the country’s invasion by Russia as he took to the track at the start of the final pre-season test in Bahrain on Thursday.

The 34-year-old, who drives for Aston Martin, replaced his traditional German flag motif that runs down the right-hand side of his helmet in a band against a white background with a similar stripe combining the blue and yellow of the Ukrainian flag.

He also had a dove carrying an olive branch, a peace sign, and lyrics to John Lennon’s peace anthem ‘Imagine’ incorporated into the design.

F1 drivers made a joint anti-war statement on Wednesday. They posed together for a photograph with the Ukrainian flag on the starting grid of the Sakhir desert track, wearing t-shirts with ‘No War’ written on them.

They uploaded the photograph to their social media channels with the caption, “We the F1 drivers stand with people from Ukraine for peace and freedom. Please NO WAR.”

Lewis Hamilton was not in the photograph due to a delayed flight but expressed his support for the action.

Vettel also had the same “No War” branding on his helmet. Russia launched an all-out invasion of neighbouring Ukraine on 24 February.

F1 has since cancelled its contract with the promoter of the Russian Grand Prix while U.S.-owned Haas last week severed ties with Nikita Mazepin, who was the only Russian on the grid, and potash-producing title sponsor Uralkali, owned by his oligarch father. Both are on an EU sanctions blacklist.