Magnussen: I was very surprised but equally very excited 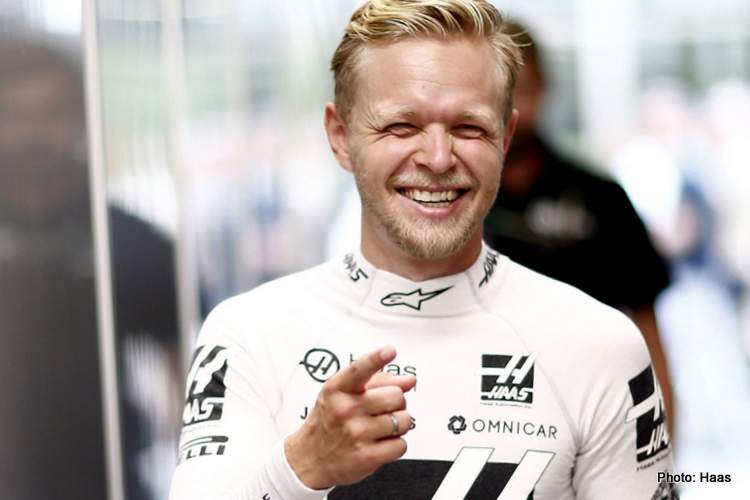 Kevin Magnussen will make a surprise return to Formula 1 this season with the same team that fired him a year ago, the Danish driver was rehired Wednesday by Haas F1 to replace Nikita Mazepin.

The 23-year-old Russian was fired over the weekend following his country’s invasion of Ukraine.

Magnussen signed a multi-year contract and will drive the new Haas car for the first time on Friday in Formula 1’s test in Bahrain. Reserve driver Pietro Fittipaldi will test the VF-22 on Thursday afternoon.

“I was obviously very surprised but equally very excited to receive the call from Haas F1 Team,” Magnussen said. “I was looking in a different direction regarding my commitments for 2022 but the opportunity to return to compete in Formula 1, and with a team I know extremely well, was simply too appealing.”

The 29-year-old was released from contracts with both Peugeot and Chip Ganassi Racing to return to Haas. Magnussen drove for Ganassi in IMSA sports cars last season, and opened this year as the endurance driver at the Rolex 24 at Daytona. He was scheduled to be Ganassi’s endurance driver next week at the 12 Hours of Sebring.

Magnussen: There’s work to do but I’m excited to be a part of it

Before this latest development, for this season, Magnussen was also slated to drive for Peugeot when its World Endurance Championship team began competition. He thanked both Peugeot and Ganassi, as well as Haas F1 owner Gene Haas and team principal Guenther Steiner “for the chance to resume my Formula 1 career.”

“I know just how competitive they both are and how keen they are to return to competing week in and week out,” Magnussen said. “We’ve enjoyed a solid relationship and our positive association remained even when I left at the end of 2020.

“I’ve been briefed as much as possible on the development of the VF-22 and the potential in the package. There’s work to do but I’m excited to be a part of it. I can’t wait to get back behind the wheel of a Formula 1 car in Bahrain.”

Magnussen has 119 career F1 starts with McLaren, Renault and then Haas from 2017 to 2020. Magnussen and Romain Grosjean were both let go at the end of 2020 when Haas elected for a throwaway season rather than spend money ahead of the 2022 launch of a new car.

Magnussen and Grosjean were replaced by rookies Mazepin and Mick Schumacher, and Haas dropped to the worst team on the grid each week.

The team owner told The Associated Press on Sunday that he wanted an experienced driver alongside Schumacher. The 22-year-old is the son of seven-time F1 champion Michael Schumacher and considered a future global superstar.

Magnussen spent last year racing for Ganassi in IMSA, where he won once and scored four podium finished in his first season racing in the United States. He also made his debut in the 24 Hours of Le Mans driving as a teammate to his father, Jan Magnussen, and he ran one IndyCar race for McLaren.

“When looking for a driver who could bring value to the team, not to mention a wealth of Formula 1 experience, Kevin was a straightforward decision for us,” said Steiner. “Kevin’s immediate availability means we can tap into him as a resource for pre-season testing alongside both Mick Schumacher and Pietro Fittipaldi.

“Kevin was a key component in our previous successes. He continued to show last year that he’s an elite race car driver adding wins and podiums to his resume. As a veteran presence in both the garage and the engineering room, he’ll provide a solid benchmark for us,” added Steiner. (Report by Jenna Fryer)