Vettel: The car wants to be driven in a different way 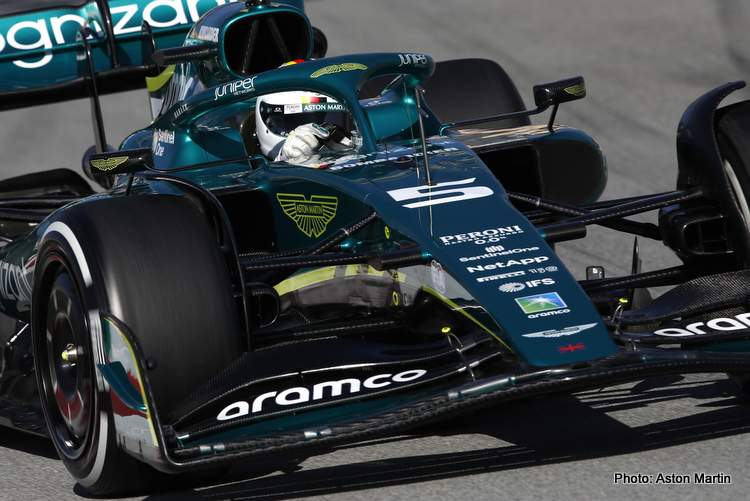 Sebastian Vettel spoke of his impressions of the Aston Martin’s 2022 Formula 1 car, the AMR22, and claims that the new car wants to be driven in a different way.

The German spoke of the feel he got from the AMR22 after the conclusion of the Barcelona pre-season testing session, and ahead of the official pre-season test in Bahrain on March 10.

The AMR22 broke down in the final minutes of the last morning testing session in Barcelona (Friday), with Vettel at the wheel, and brought the team’s running to a conclusion with 295 laps on the lap counter.

Nevertheless, Vettel was happy with the running achieved and spoke of his process of understanding the AMR22, and said to F1’s official website: “We did a good amount of laps and there’s still a lot to learn for me.

“The car wants to be driven in a different way, I am playing with driving styles and what I can do. Equally we are playing with the car, we are trying to sort some problems that we have, some of the challenges that we’ve faced, find solutions,” the four-time F1 Champion explained.

Vettel admits there is till to be learnt about the new cars, built around ground effect to the new technical regulations, and that everyone is far away from the best performance extraction from the new F1 machinery.

We are not seeing the peak of these cars yet

“I can’t say at the minute we are seeing the peak, but it’s fun, I think the challenge is fun and the belief is there that one day we will reach that peak, hopefully just before the season.

“I think it is going to be a long year anyway,” Vettel went on. “Everybody is probably in the same boat in terms of learning these cars and having certain troubles, but so far all is good.”

Vettel was pleased with the variety solutions teams have found for the new cars, something that was a surprise to various onlookers, considering how prescriptive the new rules are.

“I’m surprised there is such a big difference, I was expecting the cars to look more alike,” he admitted. “It’s good to see that people chose different routes in philosophies in car design.

“Which one proves to be right, we will see; I hope that they are all right and would be great if all the cars are very close to each other and [there is] not a big spread amongst the field,” the winner of 53 grands prix added.

Vettel is on his second year with Aston Martin, with new team principal Mike Krack recently admitting that it is up to the team to provide the German with the reasons to keep the faith in them and continue racing.