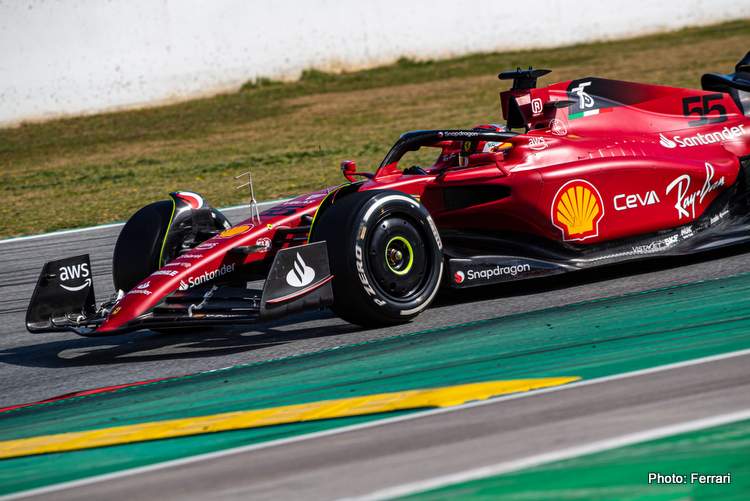 Carlos Sainz gave his evaluation of the new 18″ Pirelli tyres claiming that they suite the new Formula 1 cars, and allow the drivers to push more.

In their design of the 2022 18″ tyres, Pirelli has responded to F1 drivers’ requests to have tyres they can push all the time, and it seems that they have succeeded to deliver the final product to drivers’ liking.

Carlos Sainz seems happy with the tyres Pirelli have supplied, and said: “I did quite a bit of testing last year, I think I did three or four days in total with the compounds.

“And they look like they are suiting well this new generation of cars, and they look to be at least allowing you to push a bit more on them,” he revealed.

“And compared to other years, maybe a bit less overheating, a bit less deg, but there’s still deg, they’re still a tyre that degrades a tyre that overheats, but the scale of it for me personally, I feel like it’s a bit better. And the work done by Pirelli last year and the development seems to start to pay off a bit,” the 27-year-old from Madrid explained.

“There looks to be also quite a big step from compounds, which is something that in the last few years, for example, the C2, C3 and C4 were all very close to each other, and here there seems to be, at least around Barcelona, quite a big step in grip from one compound to another.

“So it could maybe mix up things in races a bit. So in that sense some extra differences there compared to last year,” Sainz admitted.

The Ferrari F1-75, Sainz has been testing around Barcelona, has been touted as the car to watch on the 2022 F1 grid with its distinctive sidepod design, and the reliability it showed while running 439 laps around the Spanish venue, more than any other car on the grid.

Ferrari don’t know where they stand

Ferrari team principal Mattie Binotto rubbished claims of Ferrari superiority ahead of the season accusing teams of sandbagging, and it seems that the team’s driver Carlos Sainz is following suit claiming the picture of a 2022 F1 pecking order is not yet clear.

“I can imagine why you guys are starting to take conclusions and maybe try to put a bit of a pecking order,” Sainz said to the media after Barcelona.

“But for us, really we have no clue, and I think no-one has no clue of which fuel loads [and] which engines modes is everyone running.

So we cannot confirm or deny that we are happy or sad, because we really don’t know where we are at all,” the Spaniard insisted.

“I think [in] Bahrain, maybe it will start to get a bit easier to start to guess where everyone is,” he added. “Now it’s time to work a bit more on not only the mileage, but it’s also trying to improve the porpoising, and if the car is reliable with it, which if course is tricky to do.

“We’ll keep working on it, and we’ll see if we can keep getting better,” Sainz concluded.